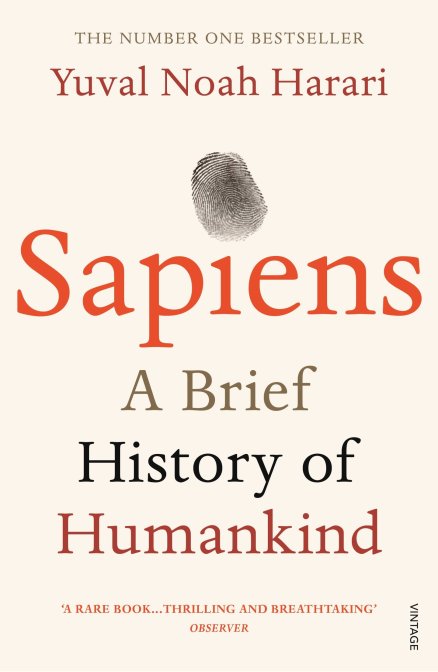 Sapiens: A Brief History of Humankind

I picked up this book believing Harari was an anthropologist. He’s actually an Israeli historian and professor at the Hebrew University of Jerusalem. His area of of specialty is medieval and military history.*

The book is aimed at a sixth grade reading level and and displays a disappointing lack of scholarship (Harari has mentioned in several interviews that “meditation” is a primary tool he uses in research). Largely based on popular pseudo-scientific mythology, it seems aimed at promoting Harari’s pet theories linking history and biology to conclude humans have no serious alternative to the pro-corporate political/economic regime we currently live under.

Many of his assertions blatantly contradict existing research evidence:

Some of his claims are just plain ludicrous (even for 2011):

This 2016 program was first broadcast the day after Super Tuesday, in which Bernie Sanders was the clear winner in three states. The documentary provides important perspective for the upcoming 2020 primares. In it, British historian and activist Tariq Ali interviews Liza Featherstone, author of False Choices: The Faux Feminism of Hillary Clinton. The latter is a collection of essays by left-leaning feminists.

Featherstone brands Clinton as an “elite” feminist – in contrast to “true” feminists, who are antiwar, anti-imperialist and and anti-racist. Featherstone also brands Gloria Steinem and Madeleine Albright as elite feminists, for publicly belittling young women for supporting Bernie Sanders. A massive backlash would force both women to apologize.

Both and Ali and Featherstone agree on Sanders and Trump being protest candidates against a corrupt political establishment. Neither can see much difference between Clinton and the Bushes, given they all support the same neoconservative wars of empire. Ali highlights Clinton’s deliberate vote seeking among moderate Republicans, abandoning working class voters (eventually labeling them “deplorables”) comprising the traditional Democratic Party base prior to 1980.

Ali also reminds us that Sanders is the first socialist US presidential candidate in over 100 years. He attributes the allure of socialism for US youth to post-Cold War childhood free of constant anti-communist propagandizing. He gives the example of the election of socialist Kshama Savant to the Seattle City Council in 2013 and 2015 (she was just re-elected in November 2019).

Both Ali and Featherstone correctly predict that Trump will win the Republican nomination. They erroneously predict Clinton winning the presidency.

Shopping for Freedom: Escaping the Cult of Consumerism

Shopping for Freedom is best described as an illustrated podcast about the legacy of Edward Bernays, the father of the public relations industry. It’s intended to remind us of the subtle way public relations and propaganda influence our culture to the point we only imagine we have free choice in the items we purchase.

The film has no background narrative. The sound track is a casual conversation between the hosts of Ashes Ashes, a podcast about the “end of the world.” Meanwhile we are bombarded with priceless archival footage of early TV ads and the propaganda news reels shown in schools and movie theaters in the fifties and sixties.

The film goes on to describe Bernays’ work under Woodrow Wilson promoting US entry into World War I, and the new science of psychological persuasion as described in the former’s 1928 book Propaganda.

The hosts go on to give illustrated examples of Bernays’ successful campaigns – to increase smoking among women and consumption of nutritionless breakfast cereals and to shame working class women who got married without diamond engagement rings or wore the same dress more than once a week.*

Intriguingly the filmmakers also insert several one second “subliminal” messages inserted into the video, which the hosts never comment on. I saw “You are enough” flashed twice, three one-second Coke ads, and “eco-capitalism” flashed once.

The film concludes by recommending viewers question all their choices. Most people claim not to be influenced by advertising. In most cases, however, many of us are unaware of habits (such as buying diamond engagement rings) the PR industry has elevated into cultural norms. In all their decisions, people need to ask themselves, “Is someone trying to sell me something?”

*Bernays was also hired by ALCOA in the mid-forties to run a campaign to dispose of toxic fluoride waste by persuading municipalities to add it to their public water systems. See Edward Bernays: Father of Water Fluoridation

In this documentary, Austrian journalist Luco Fazio takes us on a tour of North Korea. Fazio, who has visited the country seven times in 15 years, includes some footage from prior visits.

Although Fazio is always accompanied by an official “minder,” he observes obvious trends in North Korean society that are hard to conceal. The first is the steady growth of a North Korean middle class that is increasingly independent of state authority. This is clear from a growing cohort of well-off North Korean women adopting western dress, a boom in supermarkets featuring western foods and other luxury items and even occasional concerts featuring western artists.*

In North Korea, blue collar workers earn an average salary of 80 euros a month in addition to their food ration. A combination of severe western sanctions and the loss of agricultural land to drought and flooding has led to chronic malnutrition for many residents. According to Fazio, this is reflected in the shorter stature of North Koreans when compared to their South Korean counterparts.

The most interesting part of the film is a brief visit he pays to a Russian Orthodox Church and his interview with its Korean-born priest.

Where Fazio is allowed to speak to ordinary workers, they all express a strong desire to see North Korea reunified with South Korea.

At present, the US is determined to block Korean reunification (which will significantly strengthen China both economically and politically) by any means necessary. This is likely the real reason behind the current western sanctions regime. See Down the Old Memory Hole: How Bush Jr Quashed the Movement for Korean Unification

*Up until a few years ago, western music could only be found in karaoke bars catering to western tourists – and North Koreans found with South Korean films or CDs could be sent to concentration camps. 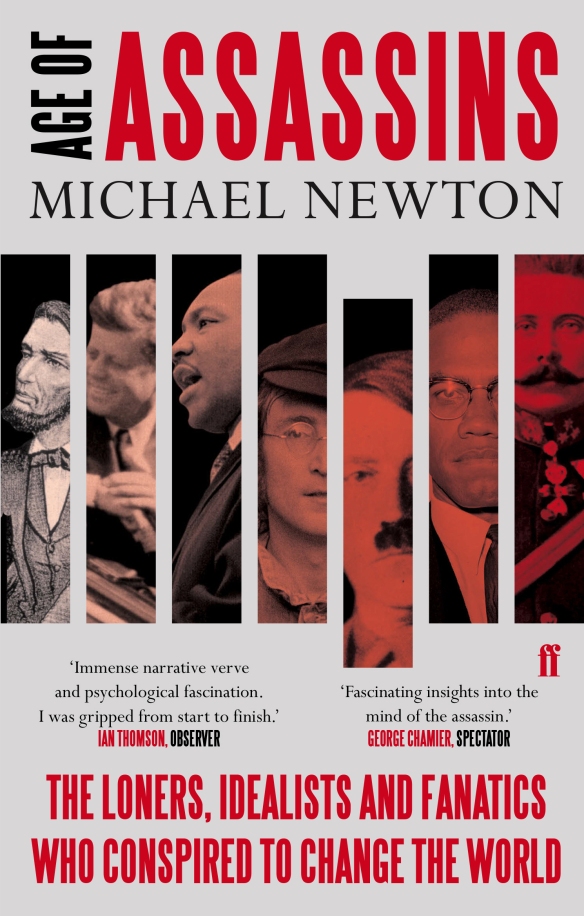 Age of Assassins: The Loners, Idealists and Fanatics Who Conspired to Change the World

In essence this book is an encyclopedia of modern day assassinations. In addition to providing comprehensive details of more than a dozen political murders, Newton proposes a general theory of what motivates assassins. In my view, this aspect of the book is a total failure. Mainly because it largely omits compelling evidence of US intelligence/military complicity in the assassinations of Malcolm X, JFK, Martin Luther King, Bobby Kennedy and John Lennon and the attempted assassinations of Reagan, Ford, George Wallace and John Paul II.

I also have a problem with Newton’s assertion that the era of assassinations began with the Lincoln assassination. Assassination via poisoning dates back to Roman times at least.

According to Newton, the Lincoln assassination inspired the Russian Nihilist movement and their numerous assassination attempts (which were ultimately successful) against czar Alexander II.

The Nihilists, in turn, inspired the Irish nationalists and the “propaganda of the deed” (see Why Social Studies Never Made Sense in School: The History of Anarchism ) tendency of the anarchist movement. The result would be a wave of attempted and completed assassinations across Europe and in the US.

The book contains a long section on the life of US anarchist Emma Goldman and the attempted assassination oshe plotted with her lover Alexander Berkman on Henry Clay Frick (hired by Carnegie to break the steel workers union) s. Although she would later renounce violence, her huge public following (according to Newton) would inspire Leon Czolgosz to assassinate president William McKinley.

The book devotes a long chapter to the rise of Serbian nationalism, the Black Hand and the assassination of Archduke Franz Ferdinand of Austria, the purported cause of World War I. It devotes numerous pages to the Armenian genocide by Ottoman rulers and several assassination attempts against Roosevelt and Truman.

I found the later chapters, beginning with the assassination of John Kennedy, a big disappointment. In my view, this section of the book is pure pop psychology and psychobabble.

1) A desire to end the suffering engendered by capitalist greed.

2) The drive for violent retribution in reaction to other killings.

3) A desire to smash the state and other authoritarian structures.

This leaves out all the lone nut assassinations – in which misfits try to murder prominent political figures for no apparent reason at all. Except for the JFK assassination (Newton acknowledges Oswald had accomplices* ). Newton seems to be a strong supporter of the lone nut theory of assassination. He blames the rise of lone nut assassins on deep seated decay and alienation in US society, which he believes is aggravated by the motion picture industry.

*Based on an acoustical recording obtained from a Dallas police microphone, the 1978 House Committee on assassinations ascertain that Oswald had to have at least one accomplice. See  https://spartacus-educational.com/JFKassassinationsC.htm

Although 15 years old, this book offers valuable historical insight into the major transformation of traditional media in the 21st century. Paul Sheehan is a columnist and former senior editor for for The Sydney Morning Herald. His book is pretty wide ranging. As a point of departure, he examines the simultaneous rise of Fox News and Alex Jones, just as total network news viewership dropped from 60 to 30%, with a comparable reduction in newspaper readership.

One of Sheehan’s most important points is that the rise of the Internet has ended exclusive control by politicians, bureaucrats, media executives and journalists over the flow of public information. A second relates to the role of Fox News in forging a divergence between the “cultural elite” (represented by the traditional TV networks and CNN) and “mainstreet.” In describing Fox News’ appeal to blue collar white workers and Christian evangelists (almost never reflected in network news coverage – despite representing 46% of the US population), Sheehan eerily foreshadows the Trump phenomenon and the battle currently being played out between Trump and heritage media.

Sheehan goes on to decry the growing blurring between news, opinion and entertainment, as well as the exponential growth of the public relations industry as the source of most western news.

His conservative political bias comes across loud and clear in his diatribe against so-called “economic” refugees*, who he claims cheat the asylum process, and antiglobalization protestors (like myself), who in his view are merely trade unions playing the system for higher wages.

Oh really? That’s news to me – and I’m sure to conservative commentator Patrick Buchanan, as well.

*With the chaos the US and allies have inflicted on Afghanistan, Iraq, Libya, Syria and Yemen, the distinction between “economic” and “political” refugees has become purely arbitrary. When the basic infrastructure of a society has been totally destroyed, the question of basic survival becomes even more acute than if a refugee has received actual death threats. 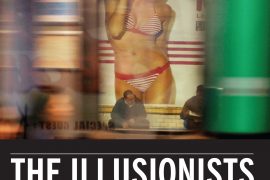 The Illusionists is about cultural globalization and the colonization of the third world via appearance marketing. The westernized image of whiteness and thinness is aggressively marketing through out the world as synonymous with power.

The effect of this marketing is to continuously bombard women with messages that their appearance is unsatisfactory – to convince them the way they look is all that matters, that no one will love them if they aren’t sexy and that anyone can be beautiful and sexy if they work at it and purchase enough beauty and weight loss products.

I was amazed to learn of all the skin whitening products being sold in Japan, India and Africa. To my immense astonishment Lebanon, where 1/3 of all women undergo it, is the plastic surgery capital of the world.

Brave Girls Alliance is a grassroots group started by teenagers campaigning to end the role of Wall Street corporations in defining beauty standards. See Brave Girls Take Back the Media