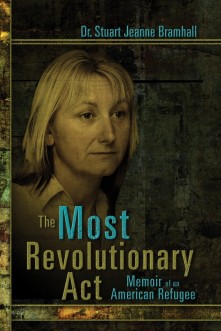 Fifteen years of intense government harassment leads a psychiatrist, single mother and social activist to close her 25-year Seattle practice to begin a new, safe life in New Zealand. What starts as phone harassment, stalking and illegal break-ins quickly progresses to six attempts on her life and an affair with an undercover agent who railroads her into a psychiatric hospital.
Available as ebook (all formats) for $0.99 from: Smashwords
Soft cover available from author for $16 plus postage from New Zealand: stuartbramhall@yahoo.co.nz

Don’t Read This Book if Not Interested in the Truth!!!!

This book should carry a health warning! It may shake your belief in that what is held most sacred and trusting in (American) society. I couldn’t put the book down! It is writen in incredible detail which could have made it hard to plough through, if it wasn’t for its compelling and shocking content. It is the details that make this personal account so convincing. And yet, Stuart Bramhall’s writing style is a far cry from being sensational.This book is a gift to anyone who values the truth above anything else.

WARNING: You will not be the same person after reading this book!

Dr. Bramhall combines historical context, political sophistication and empirical observation to present a very enjoyable and complete overview of the development of a country in change.The most revolutionary act was when she told the truth of her life and disclosed to other people that she was being surveilled and tortured by a shadowy group. Her experience pinpoints what happens during this perfect storm which is the loss of 4th amendment and human rights of regular citizens and the limited acceptance of this by mainstream America. Despite her total lack of privacy and rights and an army of sociopathic, homicidal and evil people trying to destroy her and her life, this book paints a picture of a woman with the dignity and perseverance to remain strong and continue building real positive change in the lives of others. You will be changed by this story of the human spirit.This is a gem that you cannot afford to miss. One I read fast, and am looking forward to rereading soon. (They might as well start selling copies of Dr. Bramhall’s book at coffee shops you’ll be seeing this one pop up more and more).

Title:  The Most Revolutionary Act: Memoir of an American Refugee

Do you feel safe in your house at night? Have you ever wondered about those annoying, middle-of-the-night phone calls that you thought were just a random wrong number? Have you noticed someone following you? Frightening? Yes! Imagine having this happen relentlessly for years: phone calls at all hours of the day and night; people following you; people pretending to be your friend, your client, your patient; people breaking into your house; people threatening your life; people ending the lives of people you have come to know through your practice and your volunteer activities. These things are frightening enough without the added phone taps and tampering with the television cable so that the programming is altered to implement a direct personal assault on an individual’s mental health. This and more happened to an American psychiatrist, Dr. Stuart Jeanne Bramhall. Not only did these threats affect her safety and that of her daughter, they also affected her psychiatric practice and had her committed to the psychiatric ward, induced with countless drugs and labelled as being psychotically paranoid and manic depressive. Why? It all started when she tried to help transform an abandoned school in Seattle into an African American Museum.

Dr. Stuart Jeanne Bramhall is a captivating storyteller. Her memoir, The Most Revolutionary Act: Memoir of an American Refugee, chronicles thirty years of her life as she tried to maintain her psychiatric practice in Seattle, Washington, while raising a daughter and being actively involved in several volunteer groups that rigorously sought to improve the lives of ordinary Americans. Her fight to bring research on safe AIDS treatment to the fore in the 1970s struck a raw-nerve in certain government departments. Her fight to defend African Americans abused by the system, abused by the police, resulted in greater harassment. She also lobbied for basic health care insurance for all Americans; helped establish and support, both financially and physically, the African American Museum; and she was frequently sought to financially back those who were wrongly accused in the Seattle justice system. Her views on American politics may have seemed radical to many; but hearing her story, from her point-of-view, one begins to wonder if there isn’t a conspiracy out there to block the so-called ‘freedom of speech’ right and condemn those who dare to question it.

Dr. Bramhall continued her practice in Seattle, despite the continual harassment and death threats, for thirty years. She had no desire to uproot her daughter during her early school years. After her daughter moved away to university, Dr. Bramhall made her decision to immigrate. She accepted a posting in New Zealand, and made the move. She is currently practicing child and adolescent psychiatry in New Plymouth.

The Most Revolutionary Act: Memoir of an American Refugee is an almost shocking memoir about what lies beneath the world as we want to see it.

By Nicky Hagar, Author of The Hollow Men

The FBI’s aggressive infiltration and disruption of political groups in the US since the 1960s has been an appalling episode of US political history. All manner of political groups have been wrecked after being manipulated and betrayed by government informers, while their members lived with strain and damaged relationships from never being sure who they could trust or what was really going on.

Stuart Jeanne Bramhall’s The Most Revolutionary Act: Memoir of an American Refugee is an autobiography revolving around her 15 years as a political campaigner facing these problems of trust and infiltration in dysfunctional social movements in the 1980s and 1990s Seattle. It is a well written, thoughtful and very honest book about twenty years of her life, including these intensely destructive politics, relationships, life as a practising psychiatrist and being a parent.

The book is a ‘memoir of an American refugee’ because in 2002, as the Iraq War inexorably approached, she applied for and was appointed to a psychiatry job in faraway New Zealand. The book ends as she leaves the US, with grateful relief for the better life awaiting her. The other half of the title is from Rosa Luxemburg’s words: “The most revolutionary act is a clear view of the world as it really is.” It is probably impossible to have a clear view of something as murky as the infiltrated progressive politics she lived through, but in the book we see an intelligent person telling the story of these real and hard experiences as clearly as is possible.

Book Review: The Most Revolutionary Act: Memoir of an American Refugee by Dr. Stuart Jeanne Bramhall

The Most Revolutionary Act by by Dr. Stuart Bramhall is a gripping and often disturbing memoir about 15 years of alleged government harassment she faced following her activism on behalf of African-American community organizers in Seattle during the mid 1980s.  Dr. Bramhall was a practising psychologist in Seattle until 2002 when she emigrated to New Zealand to evade shadowy figures that refused to leave her alone.  The book is well written and has the feel of an exceptional suspense novel.  It is a strange story to be sure, at times venturing into Kafkaesque territory where nothing is as it seems.  The strongest part of the book is Dr. Bramhall’s own self awakening about the National Security State and the threats to the rights of every citizen.  Conspiracy theorists will likely use her story to confirm some of their most amazing claims, while general readers will take a more skeptical approach.  Either way, this book will make any serious reader the dangers that face all free thinking people in the 21st century.

A Psychiatrist Searches for Sanity in a Crazy World

For OpEdNews: Michael David Morrissey, author of The Transparent Conspiracy

Review of The Most Revolutionary Act: Memoir of an American Refugee

This is a frightening book. Much of it reads like a thriller, but unfortunately it is a true story. Dr. Stuart Jeanne Bramhall, a woman (despite the unusual first name) and a psychiatrist, describes her 15-year long mental, emotional and physical ordeal resulting from her involvement in leftist activist politics in Seattle, Washington.

Beginning in 1986, says Bramhall, “for some unknown reason, some faceless higher-up in one of the eleven federal agencies that spy on American citizens decided I posed a threat to national security,” and from then on she was subjected to phone harassment, wiretaps, break-ins, and even attempts on her life. Since she was never able to prove any of this (and how does one prove it?), she was also confronted with the disbelief of her own professional colleagues, who were quick to diagnose her as “psychotic” and gave her the choice of losing her medical license or spending a week in a locked ward at a mental hospital for observation. She chose the latter, though she continued to be misdiagnosed and over-medicated, which exacerbated her mental torment and had serious physical side-effects that lasted for years afterward.

Bramhall learned the hard way that her fellow medical professionals were the last people in the world she could be honest with about her feelings of persecution:

“The moment I mentioned the CIA, my psychiatrist decided I was psychotic and refused to listen anything else I said… Nelson’s erroneous diagnosis stemmed from pure political naiveté. He had no reason to come in contact with political or union activists, unemployed whistleblowers or the low-income street people that the police, and, I believed, U.S. intelligence, recruited as informants. Nevertheless, I had no confidence in any of my colleagues to objectively assess my mental state. I practiced in a totally different world from other Seattle psychiatrists, who automatically turned away patients who couldn’t afford their one hundred dollar fee.”

A simple sit-in at an administration building becomes the catalyst for a surreal, Kafkaesque, hellish fifteen years for Dr. Stuart Jeanne Bramhall in her compelling new book “The Most Revolutionary Act: Memoir of an American Refugee.” Dr. Bramhall, a practicing Seattle-based psychiatrist tells in chilling detail how attending a seemingly innocent meeting to protest racial abuse at a local school triggers a covert government plot to destroy the cause and her life.

Dr. Bramhall’s work confirms the myth of the “Vast right wing conspiracy” that was dismissed by the mainstream media when it was coined by then first Lady Hillary Clinton. It is a country where no person or secret is safe. People who you trust are not to be trusted. Harassment, violence and murder are tools used to subvert the Progressive agenda and the people who advocate it.

Lest you think “The Most Revolutionary Act: Memoir of an American Refugee” is just tell the story of one woman’s struggle to fight the system, it is much more than that. Dr. Bramhall’s amazing tale also involves the Kennedy assassination, the government’s “War” on AIDS, the plot against single player healthcare, suppression of African Americans and much more. Paranoia is real. Schizophrenia is not just a mental disorder, it’ a weapon.

A psychological thriller of the first order, “The Most Revolutionary Act: Memoir of an American Refugee” is also a cautionary tale. CIA and FBI operatives are indeed among us. Opposing the agenda of Corporate America is not tolerated. Those that try fight the good fight, but the establishment will stop at nothing to stay in power. Dr. Bramhall’s harrowing tale is testament to that.

Please feel free to review my book “The Most Revolutionary Act – Memoir of an American Refugee” on askDavid.com

13 thoughts on “The Most Revolutionary Act (memoir)”