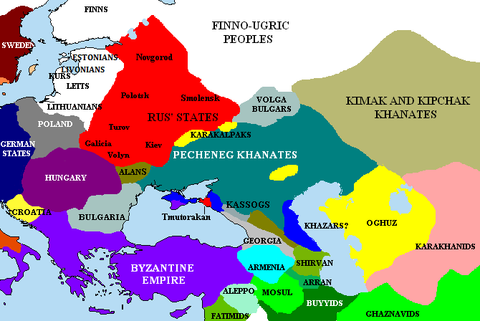 For me the most significant part of this lecture concerns the history of the Rus, Vikings who migrated from Sweden to the central steppes around 750 AD. During the 9th century AD, Rurik the Rus established a trading center in Novgorod, which they subsequently moved to Kiev to cut out the Khazar middlemen, [1] who were taxing their forest products and slaves as they passed through Khazar territory to Constantinople. Following this move, the Rus and Pechenegs formed an alliance to sack the Khazarian capitol Atil, leading to its collapse in the late 10th century.

The Pechenegs, migrating west from Görturk Khanate [2] after losing their ancestral lands to to the Seljuk Turks, formed a trade agreement with the Rus to move forest products and slaves along the Volga River and Caspian Sea to Constantinople and the Muslim world. These very ancient trade routes had brought the Scandinavian Goths (originally a forest people) onto the steppes in the 3rd century AD. It also led to an amalgam of Goths and Sarmations [3] that drastically weakened the Roman Empire at the end of the 3rd century.

Following the Rus leader Vladimir’s conversion to Orthodox Christianity in 988 AD, the Rus and Pechenegs became enemies. As Christians, the Rus were no longer allowed to sell Slavic slaves to the Turks and Arabs. As the slave trade dried up, the Pechenegs began raiding Rus territories to kidnap slaves they could sell on to Arabs and Turks.

In 1183 AD, the Cumans also went to war with the Rus over their refusal to sell them slaves. After organizing their cavalry along the lines of Cuman nomads, the Rus were victorious The 19th century Borodin opera Prince Igor is based on an epic poem about a Rus prince’s successful rebuff of a Cuman invasion.

After European Crusaders sacked the Byzantine empire in 1204 AD, the Cumans would become the primary tribe on the Central Steppes until 1236 AD, when Batu, the grandson of Genghis Khan, swept into Cuman and Russian territory.

In 1091 AD the Byzantine emperor allied with the Cuman Turks (which had occupied and assimilated the Khazar Khanate) to wage a vicious war that killed roughly 80,000 migrating Pechenegs.

At the end of the 9th century, the Magyars, [4] under pressure from repeated Pecheneg raids, also migrated west to the Hungarians plains. From there, they in turn conducted repeated raids against the Byzantine Balkan provinces and against Italy and Western Europe.

[4] Originally a forest people from the Ural mountains who migrated onto the steppes to become pastoral nomads and traders (of fur, game and fish), the Magyars (founders of modern Hungary) were the only steppes people during this period not to speak a Turkic language. The Magyars spoke a Finno-Ugric language.

This film was a real eye opener for me. Despite studying World War I numerous times in high school, I had no knowledge of the extreme turmoil in Europe during the 1919 Versailles Treaty negotiations.

Although peace negotiations were meant to take four weeks, they would last nearly six months owing to bickering between the allies. Previously I had no idea that Germany was engaged in a civil war (aka the German revolution of 1918) during the Versailles negotiations. The German delegation would ultimately resign and return to Germany, with the intention of resuming battle.*

After the German military blew up the naval fleet that had been “interned” by the allies, the German constitutional monarchy collapsed. The Weimar Republic that replaced it sent two official to Paris in August 1919 to sign the Treaty.

The long drawn out negotiations also created major popular unrest in France and Italy, which were experiencing high levels of unemployment, hunger and homelessness. French primer minister Georges Clemenceau was shot in the back by an anarchist assassin in February 1919, and the government of Italian prime minister Vittorio Orlando, one of the Big Four members, fell in June 1919. In August 1919, Hungary elected its first communist government.

The main point of disagreement among the Allied powers (Italy, France, Britain, US and briefly Japan) was the level of war reparations to impose on Germany. Initially US president Woodrow Wilson sided with British economist John Maynard Keynes. Heading the Versailles Reparations Committee, Keynes estimated that the German economy was too damaged by war and revolution to pay more than $19 billion. However In the final treaty Wilson supported UK prime minister David Lloyd George and French prime minister Georges Clemenceau in imposing war reparations of $300 billion on Germany.

Wilson’s pet project, a global League of Nations (which excluded Germany) was written into the Treaty. Ironically because the US senate refused to ratify that section of the treaty, the US would not become a member.

*The armistice signed November 11, 2018 was merely a cease fire.

Sky and Ground is about two refugee families from battle torn Aleppo who illegally smuggle themselves from Turkey to Germany, where they are eligible to apply for asylum. Due to archaic and tortuous EU law, they are unable to apply for political asylum unless they run the gauntlet and illegally cross a number of countries to reach German soil.

Using smugglers to cross the Mediterranean, they decide to leave Greece after a hepatitis A outbreak in their refugee camp. An uncle, a filmmaker, captures their journey on his Smartphone. He also uses the phone to communicate with brothers in Germany, who track them via GPS and advise them of the best routes to take.

In 2016, Macedonia has just closed their border, which means they must find an unguarded wilderness crossing point. They seek medical help when one of the women sprains her ankle. The Red Cross turns them into the police – who return them to the Greek refugee camp.

On their second attempt they walk mainly at night across Macedonia. They openly cross the Serbia border, where police transport them to a hostel in Belgrade.

They stay in a refugee camp on the Serbian-Hungarian border, where the Hungarian police demand a $50 bribe not to return them to Greece. As a single man, their uncle is forced to remain in the refugee camp for 28 days. A relative from Germany flies to Hungary to assist the other family members in traveling by train from Hungary to Austria. There, they are taken to the police station, where they are issued a 14-day permit.

Eventually the entire group reaches Germany, where they apply for, and receive, temporary asylum.

This documentary concerns Russia’s controversial Nord Stream 2 pipeline project, due for completion by the end of 2019. The EU, the UK and the US have been working hard to shut down Nord Stream 2, and various commentators believe the current Novichok psyops is an effort to pressure Germany to back out of their agreement with Gazprom.

The Nord Stream 2 project is a partnership between Russian state-owned Gazprom and five private energy companies from Britain, Germany, France and Netherlands. It will transport natural gas directly across the Baltic Sea to Germany. The existing Nord Stream 1  pipeline system transports Russian gas to western Europe mainly via Ukraine.

Since the 2014 US-sponsored coup in Ukraine, there has been considerable conflict between Russia and Ukraine over Nord Stream 1 – involving Ukraine’s non-payment of fuel charges, their failure to maintain the pipeline and illegal diversion of gas supplies. Russia totally shut down gas supplies to Ukraine in 2009 and 2014 for non-payment, resulting in very cold winters for Bulgaria, Romania and Hungary at the other end of the pipeline.*

Despite their determination to become more independent of Russian gas and oil, Poland and other Eastern European states are dismayed that Nord Stream 2 will bypass them. Ukraine is distraught because it stands to lose $2 billion annually in transit fees.

The EU is trying to stop Nord Stream 2 by claiming regulatory authority, **which Russia and German dispute, as both Nord Stream 1 and 2 are external pipelines.

The US also opposes the pipeline, as it prefers both EU countries to buy its more costly fracked LNG (liquified natural gas). They have threatened economic sanctions on countries that sign new energy agreements with Russia.

The US also opposed Nord Stream 1 (completed in 1973), fearing it might lead to a closer relationship between West Germany and Russia. Former German chancellor Willy Brandt strongly championed Nord Stream 1, over US objections. He believed trade and detente*** were a preferable strategy for bringing down the Iron Curtain. It now appears he was right.

The filmmakers raise legitimate concerns about Russia investing so heavily in yet more fossil fuel pipelines (Gazprom is also building a pipeline via Turkey to Italy and Greece) in a period when the planet urgently needs to end fossil fuel use altogether.

**Detente is a cold war term referring to the easing of strained relations.