This film was a real eye opener for me. Despite studying World War I numerous times in high school, I had no knowledge of the extreme turmoil in Europe during the 1919 Versailles Treaty negotiations.

Although peace negotiations were meant to take four weeks, they would last nearly six months owing to bickering between the allies. Previously I had no idea that Germany was engaged in a civil war (aka the German revolution of 1918) during the Versailles negotiations. The German delegation would ultimately resign and return to Germany, with the intention of resuming battle.*

After the German military blew up the naval fleet that had been “interned” by the allies, the German constitutional monarchy collapsed. The Weimar Republic that replaced it sent two official to Paris in August 1919 to sign the Treaty.

The long drawn out negotiations also created major popular unrest in France and Italy, which were experiencing high levels of unemployment, hunger and homelessness. French primer minister Georges Clemenceau was shot in the back by an anarchist assassin in February 1919, and the government of Italian prime minister Vittorio Orlando, one of the Big Four members, fell in June 1919. In August 1919, Hungary elected its first communist government.

The main point of disagreement among the Allied powers (Italy, France, Britain, US and briefly Japan) was the level of war reparations to impose on Germany. Initially US president Woodrow Wilson sided with British economist John Maynard Keynes. Heading the Versailles Reparations Committee, Keynes estimated that the German economy was too damaged by war and revolution to pay more than $19 billion. However In the final treaty Wilson supported UK prime minister David Lloyd George and French prime minister Georges Clemenceau in imposing war reparations of $300 billion on Germany.

Wilson’s pet project, a global League of Nations (which excluded Germany) was written into the Treaty. Ironically because the US senate refused to ratify that section of the treaty, the US would not become a member.

*The armistice signed November 11, 2018 was merely a cease fire. 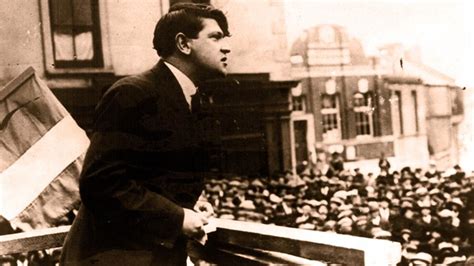 Michael Collins and the War of Independence

I also found the 23rd episode, focusing on the 1921 Irish War of Independence, really valuable. For the 120 year lead up to the war see Hidden History: The Long War for Irish Independence

In the 1918 UK election Sinn Fein, which ran on a platform of full Irish independence, won all the seats in southern Ireland. Instead of taking their seats in London, they formed their own Irish National Assembly. This Assembly, in turn, voted to declare Ireland an independent Republic with Eamon de Valera as president and Michael Collins as minister of finance. It also founded the Irish Republican Army (IRA), as well as demanding the withdrawal of all British troops.

Originally born in New York City, De Valera had been imprisoned after the 1916 Easter Rising. He now returned to the US to raise funds for the coming revolution, leaving Collins to fill his shoes as president.

The Irish War of Independence began in January 1919, when the IRA, under Collins’ leadership, attacked a Royal Irish Constabulary (RIC) outpost to seize their explosives and killed two RIC officers.

Collins, considered the father of modern urban warfare, conducted a mainly guerilla war aimed at assassinating both RIC* members and the large British spy network that supported them.

Focused on keeping order in the cities, by 1920 the RIC had totally lost control over rural Ireland. The British responded by recruiting Irish criminals as mercenaries. Referred to as the “Black and Tans” for their irregular uniforms, they became notorious for their lawless brutality against unarmed civilians.

By 1921, it became clear that the IRA lacked the numbers and weaponry to defeat the British military. De Valera, who had returned from the US, sent Collins and Arthur Griffith (founder of Sinn Fein) to negotiate a truce with British Prime Minister Lloyd George.

The best deal they could achieve was a December 1921 treat that created and Irish Free State (consisting of all but six countries in Northern Ireland**) which remained a member of the British Commonwealth and required all public servants to swear a fidelity oath to the British monarch. The treaty stipulated the withdrawal of all British troops except for designated bases.

Ireland would remain a Commonwealth member until 1936, when a new constitution transformed it into a full republic.

*The RIC was an internal police force made up primarily of Irish Catholics. Many who weren’t killed resigned in preference to attacking fellow countrymen.

**Britain had long encouraged the settlement of Northern Ireland by Scottish Protestants who they rewarded with large land estates. The 1921 Anglo-Irish Treaty redrew the boundaries for the six counties to guarantee the region a 2/3 Protestant majority. The resulting political system denied Catholics access to land, adequate housing, and government positions – resulting in a virtual system of apartheid.

People who belong to a public library can view the entire course “Irish Identity” free on Kanopy. Type “Kanopy” and the name of your library into your search engine.

The Story of Ireland Part 5

Caveat: I have serious problems with the BBC’s portrayal of the 30-year civil war in Northern Ireland as a battle of “religious identity.” This analysis conveniently whitewashes a longstanding pattern of social and economic discrimination against Northern Ireland’s Catholic underclass.

Part 5 of the Story of Ireland covers 1900 to the present – including the “Troubles*” in Northern Ireland from 1969 until the Good Friday Peace Accord negotiated under Tony Blair in 1998.

In 1913, the British parliament was preparing to grant home rule for Ireland, which was violently opposed by the protestant Ulster Volunteer Force. The latter feared losing their autonomy to a majority Catholic Ireland.

After winning a sweeping majority in the 1918 elections, Sinn Fein** declared an independent Irish republic. In 1921 Sinn Fein leader Michael Collins negotiated a peace treaty with Prime Minister Lloyd George granting southern Ireland and the six protestant counties of Ulster the status of free states within the British union.

Because it stopped short of home rule for Ireland, the civil war continued until Ireland won full independence in 1923. Northern Ireland would remain part of Great Britain.

Although Sinn Fein remained committed to the reunification of the two Irelands, for 40 years Irish heads of state opted for peace and political stability over political union. During World War II, Ireland declined to join the allied forces and remained neutral. It also supported Red China’s application to join the UN in 1949.

Thanks to membership in the Common Market and European Union, Ireland was one of the richest countries in Europe by the late 90s. Yet according to the filmmakers the so-called Celtic Tiger was accompanies by skyrocketing inequality and massive political corruption.

*”The Troubles” is a euphemism for the conflict between Northern Ireland Catholic paramilitaries fighting for greater civil rights and eventual reunification with southern Ireland, protestant paramilitaries and British troops deployed to suppress the Catholic insurgency.

**Sinn Fein is an Irish republican party formed in 1905 in support of Irish independence and unification.