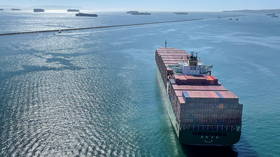 RT
The deputy secretary at the US Treasury has put Americans on notice that the only way to end the plague of empty shelves around the country is for every resident to be vaccinated. The frank warning came off as a threat to many.

Wally Adeyemo, the Biden administration’s second-highest official in the Treasury Department, appeared to publicly blackmail the still-sizable portion of Americans who have not been vaccinated against Covid-19 during a Thursday ABC interview, seemingly blaming them for the ongoing shortages of consumer goods that have led many to mock the president as ‘Empty Shelves Joe’.

Despite viral photos depicting thousands of cargo ships lined up at the Port of Los Angeles ready to unload their goods, Adeyemo claimed that the supply chain issues plaguing so many US retailers are an international issue and will only let up when a sufficient percentage of the country has been vaccinated.

Describing the disastrous economic conditions as “an economy that’s in transition,” Adeyemo acknowledged that “we are seeing high prices for some of the things that people have to buy.” While he praised the administration’s stimulus payments, he also pinned the blame squarely on the unvaccinated.

The reality is that the only way we’re going to get to a place where we work through this transition is if everyone in America and everyone around the world gets vaccinated.

While the ABC reporter repeatedly suggested that the country’s shortages of toilet paper and other panic-buy items could be traced to international supply chain disruptions, a growing number of Americans are demanding answers regarding the weirdly specific nature of certain products missing from store shelves. Some have even voiced doubt concerning whether the shortages are being introduced deliberately, either to gin up hatred against the unvaccinated or keep Americans economically off-balance as they grow accustomed to the wild disruptions of the pandemic.

Adeyemo did the Biden cabinet no favors by adding fuel to the conspiratorial fire, explaining the primary reason Biden continued to push for everyone to be vaccinated was that only then could the White House “provide the resources the American people need to make it to the other side” of the supply chain problem.

Despite blaming the international shipping industry for empty shelves in the US, the media establishment has acknowledged that the ports of Los Angeles and Long Beach – which together process 40% of the nation’s imports – had their busiest years on record last year, giving the lie to the notion that the products missing from American shelves simply don’t exist. However, many truckers working for shipping companies have balked at the idea of mandatory vaccination, leaving their firms’ fleets woefully understaffed, and others have gone on strike to demand better working conditions.

The Biden administration has attempted to address the supply chain problem by calling for the Port of Los Angeles to run 24 hours, but while he praised his own promised move as a “game changer,” the executive director of the port has made it clear that there is no timetable in place for the promised schedule shift. Meanwhile, Biden’s cabinet has come across as woefully out of touch – White House Chief of Staff Ron Klain, for example, pooh-poohed the issue of empty shelves as a “high class” problem earlier this week, eliciting criticism from both Left and Right. And Transportation Secretary Pete Buttigieg has been quietly vacationing on paternity leave since mid-August, leaving the country without even a semblance of logistical oversight as the cargo clog shows no signs of dissipating.

Labor shortages are being felt far beyond the US, though often for similar reasons. In Italy, thousands of protesters turned out to block cargo ships from unloading their bounty earlier this week. The demonstrators were outraged over the country’s adoption of a mandatory vax-to-work policy similar to that threatened by the Biden administration. And the UK government has begged lorry drivers to return to work, even luring foreign drivers in with temporary visas as the country frets over its own empty shelves issues.

Australian ‘truckies’ have united with other unions to exert pressure on the government, which has kept cities like Melbourne under lockdown for months despite vanishingly few reported cases of Covid-19. The government was already floating policies like ‘no jab, no job’ over a year ago and has led the way in leveraging the pandemic to turn Five Eyes ‘democracies’ into police states.