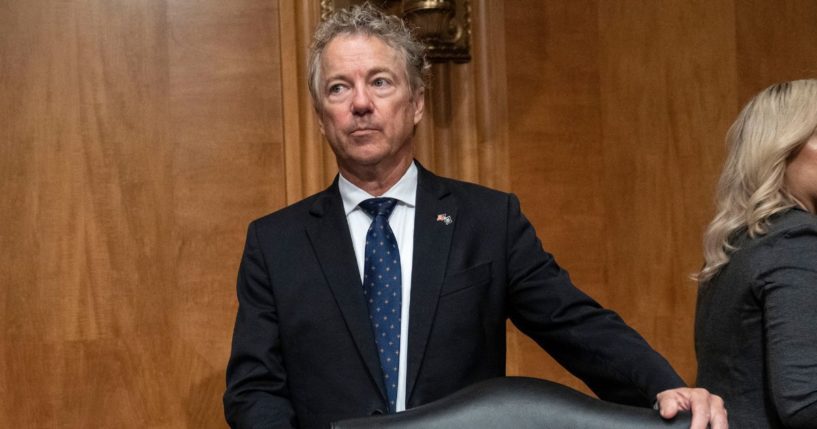 Rand Paul Moves to Pull Rug Out from Under DOJ, Leave Them with Nothing Usable from Mar-a-Lago Raid

Only a few days after the FBI’s raid on Mar-a-Lago, Sen. Rand Paul of Kentucky publicly demanded the repeal of the Espionage Act.

The Department of Justice is presumably weighing whether or not to indict former President Donald Trump for allegedly violating the act by taking classified documents with him upon leaving office (although, whether the documents in question were actually “classified” is up for dispute).According to the official search warrant, the FBI raided the Trump resort on Aug. 8 to look for said documents as well as any evidence that the documents had been knowingly altered, destroyed or hidden.Without mentioning the president or the Mar-a-Lago raid, Senator Paul took to Twitter Saturday to demand the act be repealed.

“The espionage act was abused from the beginning to jail dissenters of WWI. It is long past time to repeal this egregious affront to the 1st Amendment,” Paul tweeted.

Paul’s tweet included a link to a 2019 article from The Future of Freedom Foundation titled “Repeal the Espionage Act.”

In the 2019 article, Jacob G. Hornberger, the foundation’s founder and president, argues that the Espionage Act is “a tyrannical law” which can be, and has been, used to punish government whistleblowers.

The most obvious example of this comes in the form of Julian Assange, the head of Wikileaks who was indicted for violating the act.

“Therefore, they are calling on the Justice Department to cease and desist from its prosecution of Assange.”

Hornberger alleges that the Espionage Act, enacted in 1917, was created for this very purpose — to punish American citizens for criticizing the government’s decision to intervene in World War I.

“The law converted anyone who publicly criticized the draft or attempted to persuade American men to resist the draft into felons. And make no mistake about it: U.S. officials went after such people with a vengeance, doing their best to punish Americans for doing nothing more than speaking.”

At least one source close to Trump maintains he, much like Assange, took the documents because “he thought the American public should have the right to read” them.

“Trump declassified whole sets of materials in anticipation of leaving government that he thought the American public should have the right to read themselves,” Kash Patel, a former Department of Defense official under Trump, told Breitbart News.

“The White House counsel failed to generate the paperwork to change the classification markings, but that doesn’t mean the information wasn’t declassified,” he continued. “I was there with President Trump when he said ‘We are declassifying this information.’”

“This story is just another disinformation campaign designed to break the public trust in a president that lived on transparency. It’s yet another way to attack Trump and say he took classified information when he did not.”