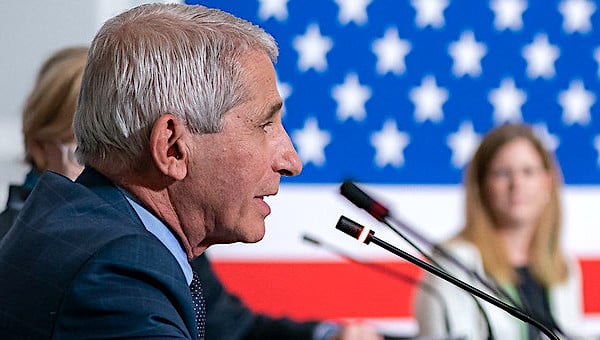 Testifying Wednesday before the Senate, a prominent health scientist charged that Dr. Anthony Fauci and other federal health officials have repeatedly lied to Congress about the government’s funding of gain-of-function research in China, which is believed by many experts to be the origin of the COVID-19 pandemic.

Dr. Richard Ebright, a professor of molecular biology at Rutgers University, said statements “made on repeated occasions to the public, to the press and to policymakers by the NIAID director, Dr. Fauci, have been untruthful.”

“I do not understand why those statements are being made because they are demonstrably false,” he said.

The hearing, “Revisiting Gain-of-Function Research: What the Pandemic Taught Us and Where Do We Go From Here,” was held by the Senate Homeland Security & Governmental Affairs Committee’s Subcommittee on Emerging Threats and Spending Oversight.

Sen. Rand Paul, R-Ky., the panel’s ranking member, has sparred over the issue in numerous Senate hearings with Fauci, who has insisted the NIH has not funded gain-of-function research in China despite evidence to the contrary.

Ebright was among the 16 scientists who authored a letter published last September in the prestigious British science journal The Lancet calling for another look at the evidence that the pandemic began with a lab leak. The scientists condemned a February 2020 letter organized by Wuhan lab collaborator Peter Daszak marginalizing anyone who entertained the lab-leak theory as a conspiracist. Ebright and his 15 colleagues said Daszak’s letter and a subsequent missive had “a silencing effect on the wider scientific debate, including among science journalists.” Fauci received an email from Daszak at the time thanking the National Institute for Allergy and Infectious Diseases director for supporting him on his dismissal of the lab-leak theory.

In his testimony Wednesday, Ebright argued that research at the Wuhan Institute of Virology funded by the National Institutes of Health to increase the lethality and transmissibility of bat coronaviruses fits the definition of gain-of-function research.

“Gain-of-function research of concern involves the creation of new health threats – health threats that did not exist previously and that might not have come to exist by natural means for tens, hundreds, thousands or tens of thousands of years,” Ebright said.

In an exchange with Paul during a Senate hearing in May 2021, Fauci stated emphatically that the NIH “has not ever and does not now fund gain of function research in the Wuhan Institute of Virology.”

Another witness was Dr. Steven Quay, whose research became part of a State Department probe of the origin of COVID-19 under President Trump. Quay, chief executive officer at Atossa Therapeutics Inc., co-wrote a Wall Street Journal column last December citing four studies, including two from the World Health Organization, that provide strong evidence for the lab-leak theory. One study, published by Nature Medicine, concluded the original SARS-CoV-2 pathogen was 99.5% optimized for human infection, which is strong confirmation of the lab-leak hypothesis.

Quay was asked Wednesday by Sen. Josh Hawley, R-Mo., if he was concerned about the expansion of Chinese gain-of-function research.

Quay pointed out that in December 2019, Chinese researchers were “doing synthetic biology on a cloning vector of the Nipah virus, which is 60% lethal.”

“We just experienced a 1% lethal virus,” he said, referring to SARS-CoV-2.

Noting the Black Plague was a 20% lethal event that set the world back 250 years, a pandemic of the Nipah virus, in his estimation, would “set us back a millennium.”