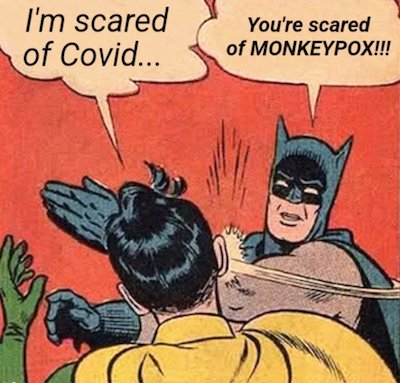 “I can’t believe it’s monkey-pox season already and I haven’t even taken my Ukrainian decorations down.” Robin Monotti

Bill Gates’ prediction that the world would face an unexpected smallpox outbreak is miraculously unfolding. Should we be surprised?

I know I’m not. Here’s the money-quote that was delivered by Gates 6 months before the first case was recorded.

“It’ll take probably about a billion a year for a pandemic Task Force at the WHO level, which is doing the surveillance and actually doing what I call ‘germ games’ where you practice… You say, OK, what if a bioterrorist brought smallpox to 10 airports? You know, how would the world respond to that?” Bill Gates, Sky News, November 6, 2021

One can only marvel at Gates’ extraordinary powers of perception. He’s like some kind of Software Soothsayer able to divine the future from the entrails of animals. Is that it, or does he have a crystal ball tucked-away somewhere in the bowels of his Lake Washington mansion? Whatever it is, it’s trully astonishing. Here’s more from the World Socialist Web Site:

Much remains unknown about what is causing the outbreak, which is the most geographically dispersed and rapidly spreading monkeypox outbreak since the virus was first discovered in 1958. In the coming days and weeks, more data and scientific understanding will emerge, but already there is profound concern within the scientific community and among the public, which has found wide expression on social media.” (“Over 100 monkeypox infections detected in 10 countries as unprecedented outbreak spreads globally“, World Socialist Web Site)

Repeat: The most “rapidly spreading monkeypox outbreak since the virus was first discovered in 1958.”

I wonder if that “rapidly spreading” part has something to do with the way that researchers have been tweaking the gain-of-function of these unique pathogens in order to make them more contagious and more lethal? Is that what’s going on?

And, is it fair to ask whether monkey-pox might be another lab-generated virus that was concocted in the 300-or-so Pentagon-funded secret labs sprinkled around the world that are presently conducting a massive war on humanity to further the ambitions of billionaire elites who are committed to reducing the global population while imposing strict, police state surveillance on every sentient being on planet earth?

We probably won’t get an answer to that one either.

In the interest of fairness, though, we should mention that “reputable” media outlets, like Newsweek magazine, have refuted the claim that Gates made the prediction that we allude to above. Here’s Newsweek’s explanation:

“While Gates has talked about the possibility of bioterrorist smallpox attacks in the past, his comments have been drawn slightly out of context and don’t mention monkeypox.” (Fact Check: Did Bill Gates Predict The Monkeypox Outbreak? Newsweek)

“Slightly out of context?” You mean, Gates did NOT draw attention to a particular infectious disease (smallpox) that magically reemerged from extinction just months later? What “context” is the author talking about? We’d like to know.

Strictly speaking, it doesn’t matter what Newsweek says or doesn’t say, after all, Gates has become the embodiment of everything that’s wrong with today’s Public Health Gestapo, which is why he’s become a magnet for criticism. And, whether he’s been treated fairly or not, a sizable number of people believe quite strongly, that Gates is the mastermind behind a plan to use lab-generated infectious diseases to subjugate the global population in order to establish a tyrannical New Order controlled by voracious elites like himself.