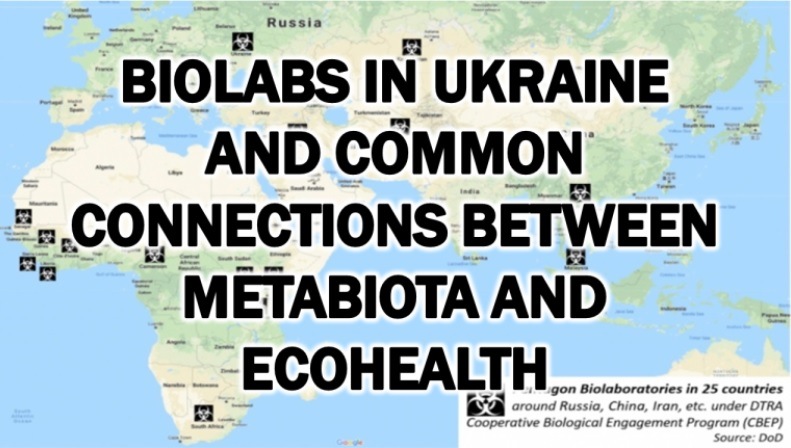 by Rhoda Wilson
The Exposé

Metabiota, the US company funded by US Department of Defence’s Threat Reduction Agency (“DTRA”) to operate biolabs in Ukraine, was founded by Nathan Wolfe who is linked to the Global Virome Project, EcoHealth, World Economic Forum and Jeffrey Epstein.

Wolfe, directly and/or through Metabiota and its sister non-profit Global Viral, is not only been funded by various branches of US Department of Defence but, is also funded by Hunter Biden’s Rosemont Seneca and CIA venture capital company In-Q-Tel.  And this is merely scratching the surface of those backing the biolabs in Ukraine.

This is Part 3 of a three-part series.  Part 1 can be read HERE and Part 2 HERE.

In Part 1 we explained what products and services Metabiota sells, who their customers are and how badly they handled the Ebola outbreak in West Africa in 2014-2015.

In Part 2 we explored the common links between USAID, US Department of Defence, EcoHealth and Metabiota.  How EcoHealth is linked to the CIA, the Wuhan Institute of Virology and the development of the Covid spike protein bioweapon while Metabiota is linked to US Military biolabs in Ukraine often run by experts in biological weapons and biological terrorism.

Citing reasons entirely independent to the above, Dr. Masahiro Matsumura concluded in his article ‘Ukraine as Biden’s Sacrificed Pawn’: “The current Russia-Ukraine war has been consequent on the globalist mismanagement of the US hegemonic decline in which President Biden has continually played a central role for more than a decade.”

Currently the lead investor in Metabiota is Pilot Growth Management. Pilot Growth’s co-founder and CEO is Neil Callahan who also sits on Metabiota’s Board of Advisors.

Hunter Biden’s attorney told the Organised Crime and Corruption Reporting Project (OCCRP) in 2020 that Biden had divested himself from his holdings in RSTP before a controversial investment in mbloom in late 2015. However, emails reviewed by FOX Business showed that Hunter Biden was in regular communication with RSTP leaders and had investment interests in multiple RSTP funds in 2016 and 2017, despite his attorney claiming he “severed his relationship” with RSTP.

During a 2016 meeting in Lviv, Ukraine, representatives of Black & Veatch and Metabiota discussed biological security, safety and surveillance with representatives of Ukraine, Poland and the United States.  It was amid these clandestine projects, in 2015, Google-funded Metabiota to the tune of $1 million and RSTP was Metabiota’s lead financer.

In 2017, Metabiota signed strategic agreements with Munich Reinsurance Company and In-Q-Tel, Inc. (“IQT”), the strategic investor that accelerates the development of technologies to support the US intelligence community. Created by the Central Intelligence Agency (“CIA”) in 1999 as “the first government-sponsored venture capital firm,” IQT has been controversial since its inception.

IQT, formerly Peleus and In-Q-It, is an American not-for-profit venture capital firm based in Arlington, Virginia. It invests in high-tech companies to keep the CIA, and other intelligence agencies, equipped with the latest in information technology in support of US intelligence capability.

Not many people may be aware of IQT which has backed some of Silicon Valley’s most prevalent advents, influencing widely used Google apps and possibly even Facebook.

Google was spawned by the CIA, via Stanford University, and has carried out several contracts with the agency throughout its existence. In 2004, Google bought the company Keyhole, which had originally been funded by IQT.