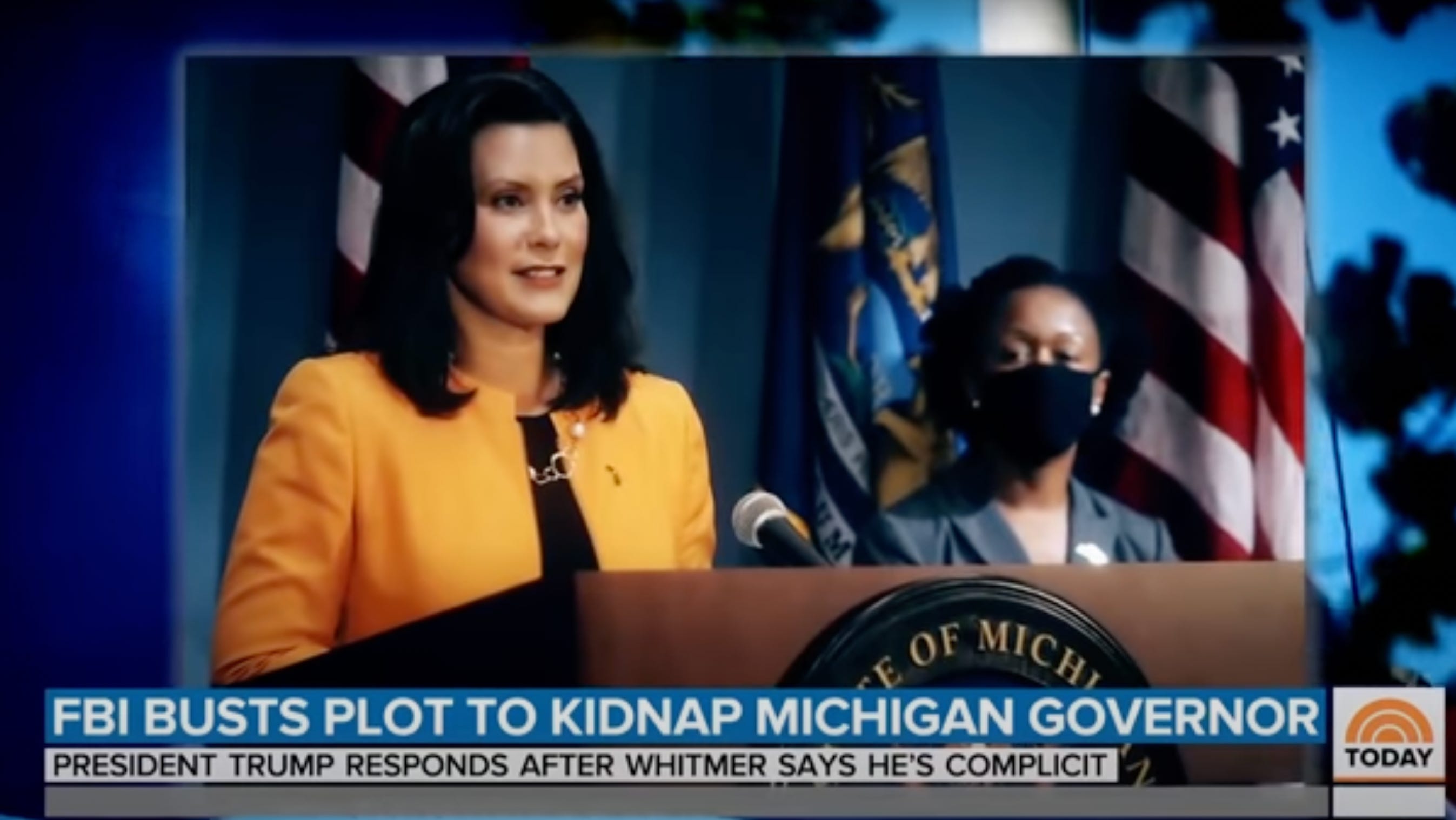 Questioning the FBI’s role in 1/6 was maligned by corporate media as deranged. But only ignorance about the FBI or a desire to deceive could produce such a reaction.

The narrative that domestic anti-government extremism is the greatest threat to U.S. national security — the official position of the U.S. security state and the Biden administration — received its most potent boost in October 2020, less than one month before the 2020 presidential election. That was when the F.B.I. and Michigan state officials announced the arrest of thirteen people on terrorism, conspiracy and weapons charges, with six of them accused of participating in a plot to kidnap Michigan’s Democratic Governor Gretchen Whitmer, who had been a particular target of criticism from President Trump for her advocacy for harsh COVID lockdown measures.

The headlines that followed were dramatic and fear-inducing: “F.B.I. Says Michigan Anti-Government Group Plotted to Kidnap Gov. Gretchen Whitmer,” announced The New York Times. That same night, ABC News began its broadcast this way: “Tonight, we take you into a hidden world, a place authorities say gave birth to a violent domestic terror plot in Michigan — foiled by the FBI.”

Democrats and liberal journalists instantly seized on this storyline to spin a pre-election theme that was as extreme as it was predictable. Gov. Whitmer herself blamed Trump, claiming that the plotters “heard the president’s words not as a rebuke but as a rallying cry — as a call to action.” Rep. Maxine Waters (D-CA) claimed that “the president is a deranged lunatic and he’s inspired white supremacists to violence, the latest of which was a plot to kidnap Gov. Whitmer,” adding: “these groups have attempted to KILL many of us in recent years. They are following Trump’s lead.” Vox’s paid television-watcher and video-manipulator, Aaron Rupar, drew this inference: “Trump hasn’t commended the FBI for breaking up Whitmer kidnapping/murder plot because as always he doesn’t want to denounce his base.” Michael Moore called for Trump’s arrest for having incited the kidnapping plot against Gov. Whitmer. One viral tweet from a popular Democratic Party activist similarly declared: “Trump should be arrested for this plot to kidnap Governor Whitmer. There’s no doubt he inspired this terrorism.”

New York Governor Andrew Cuomo instantly declared it to be a terrorist attack on America: “We must condemn and call out the cowardly plot against Governor Whitmer for what it is: Domestic terrorism.” MSNBC’s social media star Kyle Griffin cast it as a coup attempt: “The FBI thwarted what they described as a plot to violently overthrow the government and kidnap Michigan Gov. Gretchen Whitmer.” CNN’s Jim Sciutto pronounced it “deeply alarming.”

A lengthy CNN article — dressed up as an investigative exposé that was little more than stenography of FBI messaging disseminated from behind a shield of anonymity — purported in the headline to take the reader “Inside the plot to kidnap Gov. Whitmer.” It claimed that it all began when angry discussions about COVID restrictions “spiraled into a terrorism plot, officials say, with Michigan Gov. Gretchen Whitmer the target of a kidnapping scheme.” CNN heralded the FBI’s use of informants and agents to break up the plot but depicted them as nothing more than passive bystanders reporting what the domestic terrorists were plotting:

The Watchmen had been flagged to the FBI in March, and one of its members was now an informant. That informant, others on the inside, as well as undercover operatives and recordings, allowed the bureau to monitor what was happening from then on.

The article never once hinted at let alone described the highly active role of these informants and agents themselves in encouraging and designing the plot. Instead, it depicted these anti-government activists as leading one another — on their own — to commit what CNN called “treason in a quaint town.” The more honest headline for this CNN article would have been: “Inside the FBI’s tale of the plot to kidnap Gov. Whitmer.” But since CNN never questions the FBI — they employ their top agents and operatives once they leave the bureau in order to disseminate their propaganda — this is what the country got from The Most Trusted Name in News: 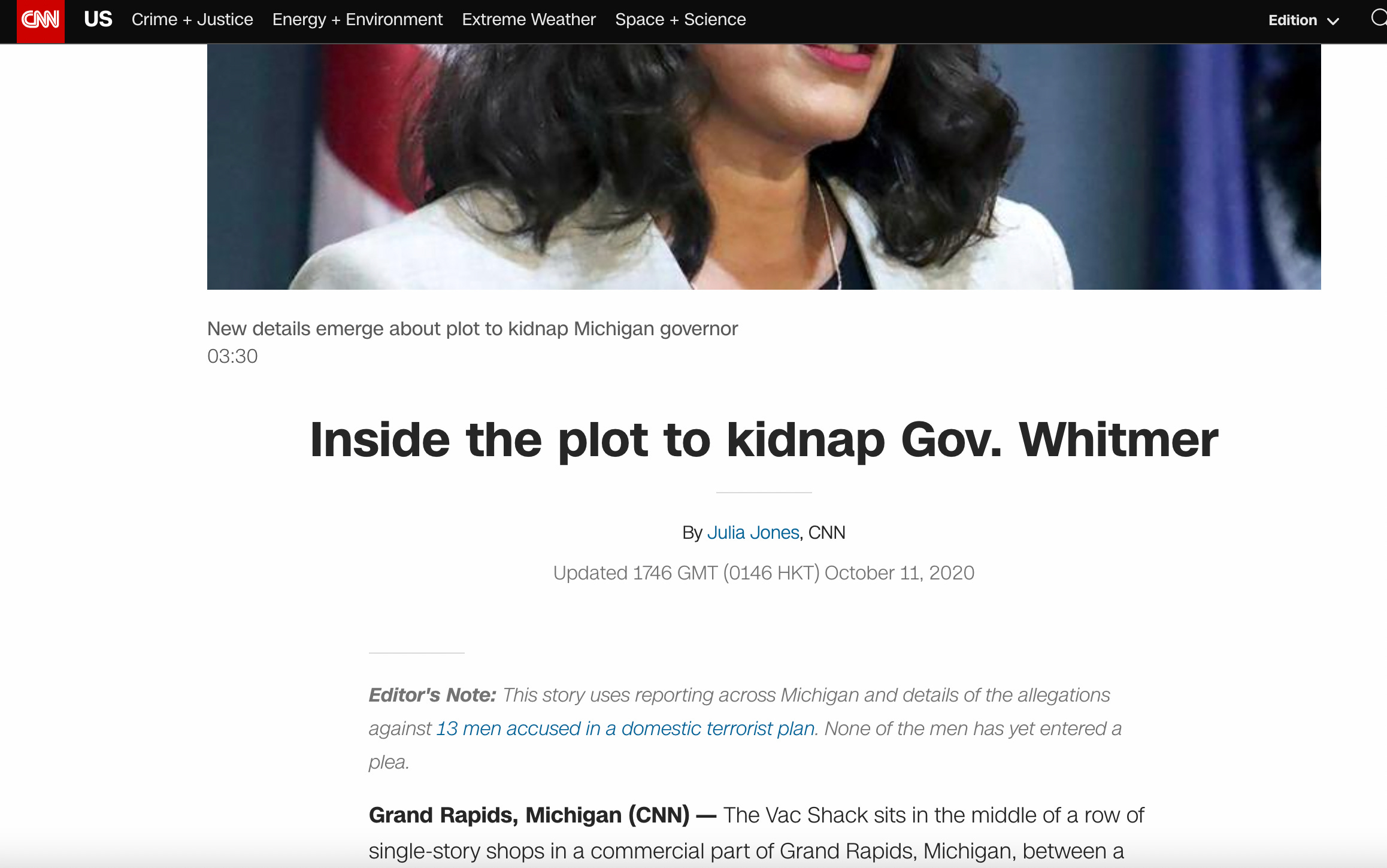 In the Whitmer kidnapping case, the FBI’s own affidavit in support of the charges acknowledged the involvement in the plot of both informants and undercover FBI agents “over several months.”

In sum, there was no way to avoid suspicions about the FBI’s crucial role in a plot like this absent extreme ignorance about the bureau’s behavior over the last two decades or an intentional desire to sow fear about right-wing extremists attacking Democratic Party officials one month before the 2020 presidential election. In fact, the signs of FBI involvement were there from the start for those who — unlike CNN — wanted to know the truth.