By Michael Welch and Cory Morningstar

Great synopsis of the powerful corporations funding (via their foundations) the global climate emergency movement. Especially concerning is Morningstar’s report on Jane Goodall’s and Greta Thunberg’s involvement in the Fourth Industrial Revolution panel at the World Economic Panel in Davos in in January. Both Bill Gates and Al Gore (along with a number of fossil fuel companies) are involved in promoting the rollout of carbon capture techonolgy, software behavioral change (eg We Don’t Have Time) technology and various geoengineering technologies – to be funded mainly via the redirection of public pension funds.

“What is going on – is the launch of a global campaign to usher in a required consensus for the Paris Agreement, the New Green Deal and all climate related policies and legislation written by the power elite – for the power elite.”

LISTEN TO THE SHOW

One Swedish teenager, 16 year old Greta Thunberg, captured the imagination of the world with her resolute determination to demand urgent action on climate.

For three weeks last year, in the lead up to the Swedish general election, she refused to attend classes at school and instead sat outside the Swedish Parliament as a visible presence demanding climate action. Since the election she has continued to take Fridays off of school. [2] 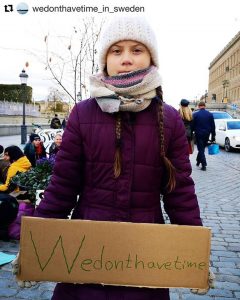 Greta herself has become a celebrity climate activist. She has given a Tedx Talk, she was invited to speak at the most recent UN Climate talks in Katowice, Poland, and in late January, she participated in a panel at the World Economic Forum (WEC) in Davos, which included U2 frontman Bono, acclaimed conservationist Jane Goodall, and the UN climate chief Christiana Figueres.

Her climate strike for climate action has garnered attention the world over and inspired young people by the tens of thousands to follow her example and skip classes one day a week as a way of heightening the need for urgent action. In Brussels alone, 32,000 students and their supporters took to the streets during the final day of the WEC, to be followed by a reported turn-out of 100,000 the following Sunday. In France, on that same Sunday, 80,000 reportedly took to the streets in centres across the country, exceeding the turn-out at the previous day’s Yellow Vest rallies! [3][4]

Inspiring as the example of Greta Thunberg may be – she also happens to be on the autism spectrum – questions arise as to how exactly one teenaged girl managed to attract so much international attention to her cause, with a humble action outside the Swedish parliament.

Global Research audiences are well aware of how simple it is to dismiss and ignore people with narratives that threaten the powerful (think about challenges to the official stories about the White Helmets in Syria, Russia-Gate, 9/11, Venezuela’s ‘dictatorial’ president, etc). It should literally have been child’s play to sabotage Greta long before her campaign had a chance to touch the minds and hearts of millions. Is there more to the story of the rise of Greta Thunberg?

Investigative journalist Cory Morningstar, encouraged by this broadcaster, looked into the background of the young environmental crusader and revealed some rather concerning details about convergences with major players in the international environmental NGO arena. The result of her research is a comprehensive series of articles entitled The Manufacturing of Greta Thunberg – For Consent.

This four part essay, (part 4 is to be posted on or around February 3rd) exposes the involvement of a technology firm called We Don’t Have Time, which was pivotal in launching Greta’s online presence to viral status. Cory also outlines how Non-Governmental Organizations like AVAAZ, aligned with imperial interests and powerful figures like Bill Gates and Al Gore have been engineering climate solutions and climate activism for years. She argues that well-intentioned youth activists are helping to manufacture the demand for a program which will further assault the world’s most marginalized peoples, and devastate rather than heal a degraded planet.

10 thoughts on “Saving the Earth or Saving Capitalism? The Inconvenient Truth Behind Today’s Youth Climate Campaigns”