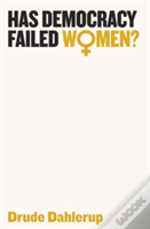 This book challenges conventional wisdom that Greece was the birthplace of democracy, as it totally excluded women from participation in the political process.

Has Democracy Failed Women? starts with a brief review of women’s long difficult battle for the right to vote. New Zealand was the first to grant women a vote in national elections in 1893. Other English-speaking countries, including Britain, enacted women’s suffrage following World War I. Catholic countries, including France, Italy, Chile and Argentina waited till World War II ended. It was 1971 before women could vote in national elections in Switzerland.

It’s well established that democratic assemblies with inadequate female representation, are incapable of addressing the continuing oppression women experience under capitalism.* Yet more the 100 years after first receiving the right to vote, women (who comprise 52% of the population) are still denied full representation in the institutions of power. In the West, only two parliaments have granted women full parity (40-60% representation). In the global South, only Rwanda and Bolivia have as many women as men in their assemblies.

Dallerup blames the “secret garden of politics,” the failure of most political parties to select candidates in a transparent or democratic process, for women’s failure to receive fair representation in government. In most places, party officials limit their candidate pools to well-established old boy networks.

I was very surprised to learn that 57% percent of countries have achieved better female representation by imposing gender quotas. Pakistan was the first in 1956 (though they have subsequently rescinded the quota), Bangladesh in 1972 and Egypt in 1979. Scandinavian countries took a big step towards gender parity via voluntary party quotas

As of 2015, only three countries had no women at all in government: Bosnia-Herzegovina, Hungary, Pakistan and Saudi Arabia. Trump has only two female cabinet members, the lowest since the 1970s.

In an era in which the power of elected assemblies is being systematically eroded by multinational corporations, Dallerup feels it’s also really important to ensure strong female representation on corporate boards and the regional and international bodies they control. Spain, Iceland, Belgium, France, Germany, India and Norway all have laws requiring a minimum of 40% representation on corporate boards (a move consistently linked with higher profits.

Patriarchy and Accumulation on a World Scale: Women in the International Division of Labour

In this 1986 classic, Mies challenges Marx’s description of the unpaid labor of women (childrearing, care of the sick and elderly, housekeeping and subsistence agriculture, handicrafts and firewood and water collecting in the Third World) as part of their “natural” function. In doing so, she provides the first comprehensive economic analysis of patriarchy.

While Marx and Engels readily acknowledge that capitalism oppresses women, they overlook the fact it also exploits them via the massive amount of free labor it makes them provide. According to Mies, it’s only this unpaid labor, which Mies refers to as super-exploitation, that makes wage labor exploitation possible.

Super-exploitation of Women and Colonies Finances Capitalist Expansion and War

Violence and the Sexual Division of Labor

Based on modern anthropological research, Miles also offers a much clearer explanation of how the sexual division of labor arose, as well as its intimate link with violence. Citing numerous studies, she shows how women’s childrearing role made them them responsible for most food production in primitive societies (80% in hunter gatherer societies). Women also developed the first tools – namely baskets and pots for storing grain.

Popular culture places much more emphasis on the tools invented by men – weapons – and their use in hunting. Current anthropological evidence suggests they played a much bigger role in raiding other tribes to kidnap and enslave women (over time men were also enslaved), both for procreation and their food producing capacity.

Witchcraft Trials, Colonization, Mass Enslavement and the Rise of Capitalism

With the rise of capitalism, violence against both women and colonies (to compel their free labor) significantly increased. The pervasive witchcraft trials (and land confiscations) that began in the late 15th century, accompanied by the violent enslavement of New World colonies and Africans, would create the massive capitalist accumulation required for full scale industrial development.

Why Violence Against Women is Increasing

Mies also provides an eloquent analysis – linked to the intensification of capital accumulation – for the global increase in violence against women and Third World colonies over the last four decades. The onset of global recession in the 1970s forced capitalists to shift their labor intensive work to the Third World, where harsh US- and European-backed puppets use violence to suppress wages..

In the First World, simultaneous cuts in public services, have significantly increased demands on women for free labor (especially in the area of childcare and care of the sick and elderly). The simultaneous increase in violence against women (and the psychic trauma it induces) make it all the more difficult for women to organize and resist this super-exploitation.

This documentary traces the development of patriarchy around 5,000 years ago, which Dyer links to the consolidation of agricultural villages into empires. Simultaneously in Mesopotamia, Central and South America and China, hierarchical political systems formed under a single male dictator who controlled their subjects via absolute terror.

This transition from autonomous villages into heavily militarized states was always accompanied by strict control of women’s behavior. Dyer maintains the ultimate goal of controlling women was to increase the birth rate and produce more male subjects for the rulers’ armies. In Mesopotamia, the formation of new religions (Judaism, Christianity and Islam) glorifying a single male god was the crowning achievement of patriarchy.

The 40 minute film is divided into four parts. Parts 2-4 start automatically when the prior part concludes.

Pure Lust* is about the systematic psychological indoctrination of women that occurs under patriarchy.

Daly’s approach to her subject is both historical and etymological. Historically organized religion has assumed primary responsibility for indoctrinating women. Daly focuses mainly on the Catholic religion, particularly the cult of the Virgin Mary and how this doctrine was used to trap women in subservient roles. After identifying clear parallels in the Jewish and Muslim religion, she examines how judges, lawyers and other male-oriented institutional roles have replaced priests in modern secular society.

The book has a heavy etymological focus, with an exhaustive examination of ways in which women’s oppression is embedded deeply in contemporary culture and language. Women who wish to fully liberate themselves must learn to recognize how language itself oppresses us and, where necessary, invent our own (as Daly does throughout most of the book).

Daly maintains this indoctrination has caused women to become separated from our “elemental race,” which is rooted in harmony with the natural world. Many women sense this – that they have been blocked of their capacity to conceive, speak and act in their own original words. They simultaneously sense their energy is being systematically drained for male use.

According to Daly, the lot of women under patriarchy has been the sacrifice of their personal needs and ambitions for children, husbands, aged parents and “just about everyone else.” This is especially true of poor and minority women.

The Origin of War, Racism and the Rape of the Environment

Simultaneously, unbridled male sexual aggression (a condition based on an obsession with impotence that Daly refers to as “phallic lust”) translates into war, racism, imposed poverty and famine, the rape of the environment and the insidious spread of the drab ugliness of a man made environment that systematically deadens minds.

Within male-dominated “sadosociety,” women aren’t allowed a self – all their experiences must be mediated by men. Daly views the modern commercial building – consisting of square, flat spaces with rigidly uniform decor, hermetically sealed windows, homogenized sound environment and constant light – as the perfect archetype of this mediated environment. The end result is a state of chronic sensory deprivation.

Under patriarchy everything women hear, touch, feel and understand about the world has been processed for us. We live in a society dominated by the mass production of “potted” (ie artificial) desires and emotions. The result is the killing of consciousness and integrity in many women, allowing the routine abuse of the poor, minorities, and so-called enemies to go unnoticed and uncriticized.

*The title Pure Lust refers to “elemental female lust,” which Daly defines as women’s intense longing for the “cosmic concrescence that is creation.”

Caliban and the Witch

Caliban and the Witch*discusses the critical role witch burning played in the enclosure movement that drove our ancestors from the commons.

As Federici ably documents, medieval Europe was characterized by nearly continuous rebellion by serfs against their slave-like conditions. According to Federici, it was only by introducing a reign of terror involving the execution of nearly 200,000 women that the ruling elite succeeding in preventing total insurrection.

In all European countries (both Catholic and Protestant), witch burning was accompanied by legislation expelling women from most occupations and severely restricting their legal and reproductive freedom. The control over women’s reproduction (including a ban on birth control, abortion and all non-procreative sex) was a direct reaction to the population decline caused by famine and plague. Their lower numbers enabled peasants and urban workers to cause an economic crisis by demanding higher pay and improved working conditions.

The True Purpose of the Inquisition

Contrary to what we’re taught in high school and college history classes, the true purpose of the Inquisition was to not to stamp out heresy but to end the continuous peasant revolts. The hundreds of heretical movements (eg the Cathars) the Catholic Church persecuted during the Middle Ages were actually political revolts aimed at creating genuine political and economic democracy. Women figured very prominently in the Cathars and similar heretical religions. In addition to exercising the same rights as men, they also led many food riots and other revolts against enclosure.

Although none of these insurrections succeeded in overthrowing class society, they were extremely effective in winning greater political and economic freedom for both serfs and proletarian workers in the textile industry and other crafts.

According to Federici’s research, the strength of peasant resistance peaked between 1350 and 1500, due to a severe labor shortage resulting from the Black Death (which wiped out 30-40% of the European population), small pox and high food prices. Highlights of this period include Ghent, which created the first dictatorship of the proletariat in 1378, and Florence, which created the first worker-run democracy in 1379.

The mass refusal of peasants to work under slave-like conditions created a major economic crisis, which the ruling elite addressed through wars of acquisition against other European countries, the colonization of Asia, Africa, America and Oceania and the reimposition of slavery (both in Europe and the Americas).

*Caliban is the subhuman son of the malevolent witch Sycorax in Shakespeare’s play The Tempest.

A big shout-out to the reader who recommended this book to me. I loved it.