In Part 2 of the Protestant Revolution, historian Richard Jones-Nerzic explores the steady transformation of women’s lives following the Protestant reformation.

Whereas men and women were assigned segregated seating in the medieval Catholic church, they began sitting together in Protestant churches. Likewise sex ceased to be a sin, and clergy began to marry. Luther himself set the example when he married a former nun.

Luther’s idealized family life changed radically when the industrial revolution forced men out of the home into factories. During the Victorian era, well-to-do educated wives assumed an evangelical role as they led charitable crusades among the urban poor – building Sunday schools, orphanages and hospitals. They quickly became frustrated that this charitable work produced little real reform and began campaigning for real political power through anti-slavery and women’s suffrage campaigns.

However, according to Jones-Nerzic, their work in the war industry during the two world wars was definitely the most liberating factor in the lives of 20th century women.

The last third of the film explores the vehement backlash against equality and control over their own reproductive lives with the rise of fundamentalist Christianity.

The final episode of this series has a dual focus: the 1968-71 uprisings that occurred in Japan, Chile, Brazil and France and the birth of the women’s, gay liberation and environmental movements in the US.

Although the Red Army’s links to US intelligence are less well-established than those of Al Qaeda, ISIS (and Italy’s Red Brigades and Germany’s Baader-Meinhoff Gang – see 1968 Global Revolt and the Brutal 1969 Crackdown), one time US intelligence asset Lyndon Larouche called attention to their CIA links as early as September 1974 (see Japan’s Red Army Reactivated).

After becoming a filmmaker, Adachi traveled with the Japanese Red Army to Palestine where they engaged in military exercises with the Popular Front for the Liberation of Palestine. There, along with German radicals and volunteers from the Irish Republican Army, they smeared themselves with blood-red berry juice and acted out a number of fake battles for the benefit of journalists and filmmakers.

Part 4 also examines the popular overthrow of Chile’s dictator, Brazil’s failed uprising, and successful uprisings by French and Japanese farmers to prevent US military base expansion.

The film concludes with a brief history of US activists who parted company with the antiwar movement to form the women’s liberation, gay liberation and environmental movement. As historian Tariq Ali points out near the end, the 1968 uprisings in the US and the UK were primarily libertarian and focused on individual freedoms. This possibly explains why they took a much different direction in other countries.*

*The influence of US intelligence in guiding this direction can’t be ruled out, see How the CIA Used LSD to Destroy the New Left , Did the CIA Use Gloria Steinem to Subvert the Feminist Movement ,  A C-SPAN Talk About Gloria Steinem and Other CIA Anomalies

Part 3 focuses on 1969 and the extreme police and military violence directed at anti-government protests in the US, Japan, Italy and Germany.

In the US, 1969 saw the occupation of derelict University of California-Berkeley property for the formation of a People’s Park and the formation of the Black Panther Party for Self-Defense. The latter would be destroyed by heavy CIA/FBI infiltration and assassination and false imprisonment of many of its leaders. 1969 also saw the sidetracking of many US antiwar protestors into environmental activism, women’s and gay liberation and alternative lifestyles (the hippy peace, love and truth movement, Woodstock and communal living).

In Germany, the students rejecting bourgeois capitalist lifestyles formed the Kommune movement. The filmmakers erroneously describe the Baader-Meinhoff Gang (aka the Red Army Faction), responsible for setting fire to department stores and warehouses, as a fringe offshoot of the the Kommune movement. The Baader-Meinhoff Gang was exposed in the early 90s as a CIA/NATO-driven product of Operation Gladio.*

The filmmakers also mischaracterize Italy’s Red Brigades as a violent offshoot of the Italian antifascist movement that mobilized tens of thousands of workers and students. The Red Brigades, responsible for tens of thousands of false flag bombings and assassinations, was also created and run by Operation Gladio. The Italian government used the Red Brigades “terrorist” activities events to justify the adoption of extreme repressive measures, including the imprisonment of 30,000 antifascist activists.

*Operation Gladio is the code name for a CIA/NATO backed paramilitary network that carried out thousands of false flag terrorist operations to justify repressive government legislation to suppress grassroots anti-capitalist organizing. It was exposed in a 1992 BBC documentary. 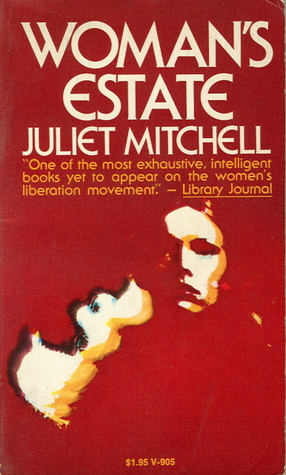 Women’s Estate is about the history of the modern women’s liberation movement. Women’s liberation began in the US in the late 60s and quickly spread to Britain and the rest of the industrialized world. Mitchell compares and contrasts women’s liberation with the earlier feminist movement of 1880-1920, as well as tracing contemporary political influences that shaped it.

Mitchell traces the modern feminist movement to the publication of The Feminine Mystique by Betty Friedan in 1963. In 1966, Friedan would co-found National Organization for Women (NOW) with Gloria Steinem (see Did the CIA Use Gloria Steinem to Subvert the Feminist Movement?). Mitchell classifies NOW as a “reformist” group that limited itself to winning isolated reforms (affirmative action laws, legalized abortion and access to birth control, etc), as opposed to women’s liberation groups which sought to overthrow patriarchy and male-dominated society.

Owing to the immense media attention it received, women’s liberation was the most public revolutionary movement in history. According to Mitchell, its main influences were the mid-sixties black liberation movement, the student movement and the youth (aka “hippy”*) movement.

She traces the official origin of women’s liberation to a protest at Nixon’s 1969 inauguration in which female speakers were taunted with sexually explicit insults. This was the last straw in a long frustrating period in which male antiwar activists edged women out of decision-making and relegated them to typing and tea making.

By 1970, there were women’s liberation groups in all of the developed world, except for Ireland, Austria and Switzerland.

Although women typically experience the most extreme levels of poverty and oppression, the women’s liberation movement, like the earlier suffrage movement, was mainly led by middle class women. According to Mitchell, it’s common for the oppression of underprivileged women to be passed off as natural and unchangeable.

Mitchell devotes most of the book to an analysis of the politics of oppression and the cultural factors (especially so-called “family values) that cause women’s oppression to appear invisible.

In her view, this is why consciousness raising groups were so essential to women’s liberation. By openly sharing their negative treatment by men, women were astonished to learn other women had similar, often identical, experiences. This helped them to acknowledge their individual frustration and suffering was, in actuality, a political problem.

As Mitchell puts it:

The first symptom of oppression is the repression of words: the state of suffering is so total and assumed, it’s not known to be there.

*According to Mitchell, the hippies rebelled against social manipulation and emotional repression by the political establishment without seeking specific political change.