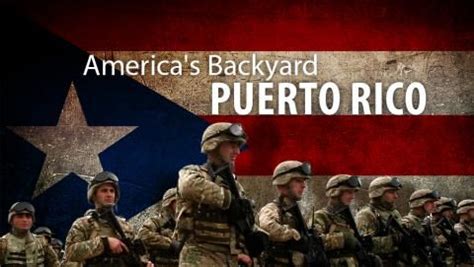 This Press TV documentary concerns ongoing oppression in America’s best-known colony Puerto Rico. In 1917, all native-born Puerto Ricans were declared US citizens (despite overwhelming opposition on the island), resulting in a disproportionate number being drafted to serve in the two world wars and Vietnam. Although Although Puerto Rico is officially classified as a “self-governing” commonwealth, the US Congress retains the power to overrule decisions of its Senate and Legislative Assembly.

The colony has a heavily suppressed independence movement, targeted both by an FBI’s Cointelpro* operation for surveillance, phone taps and infiltration and by right-wing CIA ant-Castro death quads.

At present, only a minority of Puerto Ricans support independence, with the majority supporting either statehood or continuing colonial status. Although Puerto Rico enjoys a much lower standard of living than the mainland US, it’s significantly wealthier than its Caribbean neighbors. Residents worry independence would seriously harm the Puerto Rican economy.

The US Navy’s fifty-year use of the Puerto Rican island of Vieques for bombing practice remains a sore point for many local activists. In 1999, the accidental bombing of a scenic observation area (killing a local security guard) resulted in a successful nonviolent campaign to stop the bombing practice.

The US continues to drag its feet on a promised toxic cleanup of Vieques, which was also used to dump jet fuel and other industrial wastes. Leakage of toxic chemicals to nearby civilian areas means the island has a 30% high cancer rate than the rest of Puerto Rico.

*Cointelpro is the name given to an FBI counterintelligence program started in 1956 to spy on US political activists. Although it officially ended in 1971, illegal FBI surveillance, infiltration and disruption of union and human rights organizations continue to the present day.

The film can be viewed free at https://www.presstv.com/doc/detail/12956