Harl believes the Sacae were present on the central steppes from the beginning of the Iron Age (900-600 BC) and likely domesticated the Bactrian camel used on the Silk Road. The Sacae had a close trading relationship with both Sogdiana**  and Bactria (with its dense settled cities) in Transoxiana. The latter was conquered by Alexander the Great in 329 BC. Alexander’s successors set up a Greek kingdom in Bactria that issued Greek coins and relied on trade with Sacae nomads for its prosperity.

In 145 BC the Sacae began migrating from the central steppes into Transoxiana, sacking cities and torching fields as far east as the Greek cities Alexander the Great founded in India.

The Tocharian-speaking Kushans are discussed at length in India’s ancient Buddhist texts. We know a little about their emperors from the coins they issued and the Rabatak Inscription erected by the Kushan emperor Kanishka (127-147 AD). In addition to likenesses of their emperors, Kushan coins feature a variety of Greek, Hindu and ancient Persian gods.

The Kushan, largely responsible for extending the Silk Road into India, eventually conquered and controlled the Indus Valley and the western part of the Tarim Basin. Their construction of Indus Valley cities and Buddhist monasteries led to the translation of Buddhist texts from Sanskrit into vernacular languages. This, in turn, led to the spread of Buddhism along the Silk Road into Central Asia.

The Kushan are also well known for their art, which is a composite of Greek and Indian styles. Although they were tolerant of all religions, the Kushan were great patrons of Buddhism and the first to produce images of Buddha in human form.

*The Yeuctzi, a nomad tribe just north of China, maintained a cavalry of 100,000 – 200,000 mounted archers. It was this tribe the Han dynasty sought to ally with in their battles with the Xiongu.

**Sogdiana was an ancient Iranian civilization in present-day Uzbekistan, Tajikistan, Kazakhstan, and Kyrgyzstan known for both cultivated farmlands and Silk Road caravan cities. 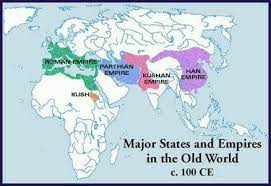