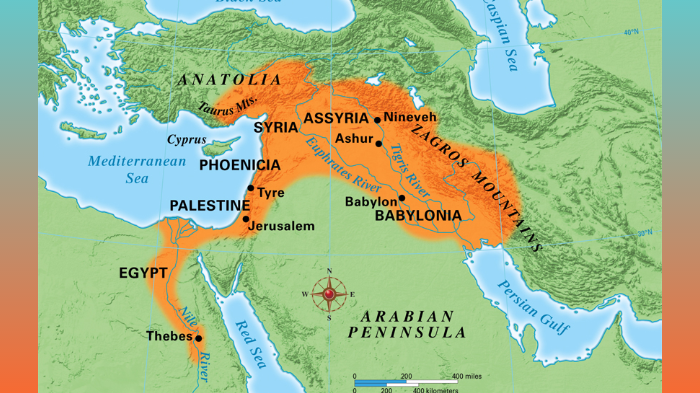 Prior to the 14th century BC (when it achieved independence from from Hatti – see How Civilization Collapsed in the Late Bronze Age), Assyria was merely one kingdom among many in Mesopotamia. Centered along the Tigris River, it produced one of the most stable dynasties in human history, persisting over 700 years. Favored by sufficient rainfall to farm without irrigation, it also intersected several international trade routes. We know more about it than other Mesopotamian civilizations because it was immortalized in the Bible and by ancient Greek and Roman authors.

Unlike other Mesopotamian kings, the king of Assyria was also high priest of the (Babylonian) god Assur.*

In 1200-1100 BC, Assyria collapsed along with other Near East kingdoms. However in the ninth century BC, Adadd Narari II set up recapturing Assyria’s former territories. In no way the “kind shepherd” like earlier Mesopotamian kings. He deliberately employed violence and terror to subdue captive territories and discourage rebellion.

Under Adadd Narari II and successive kings, the farmer-based army serving three months a year gradually transitions into a professional standing army. In addition to introducing mounted cavalry and battering rams, it refined the use of sieges to starve targeted cities into submission, as well as forcibly relocating captured prisoners away from their home territory.

The Israelites engaged in numerous rebellions in their efforts to break free of the Assyrian empire. The rebellions ended when the Assyrian king forced mass relocation of their population to scattered regions around the empire. 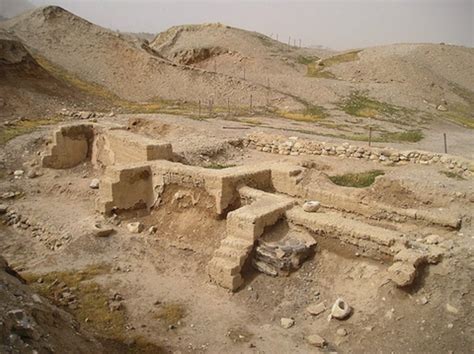 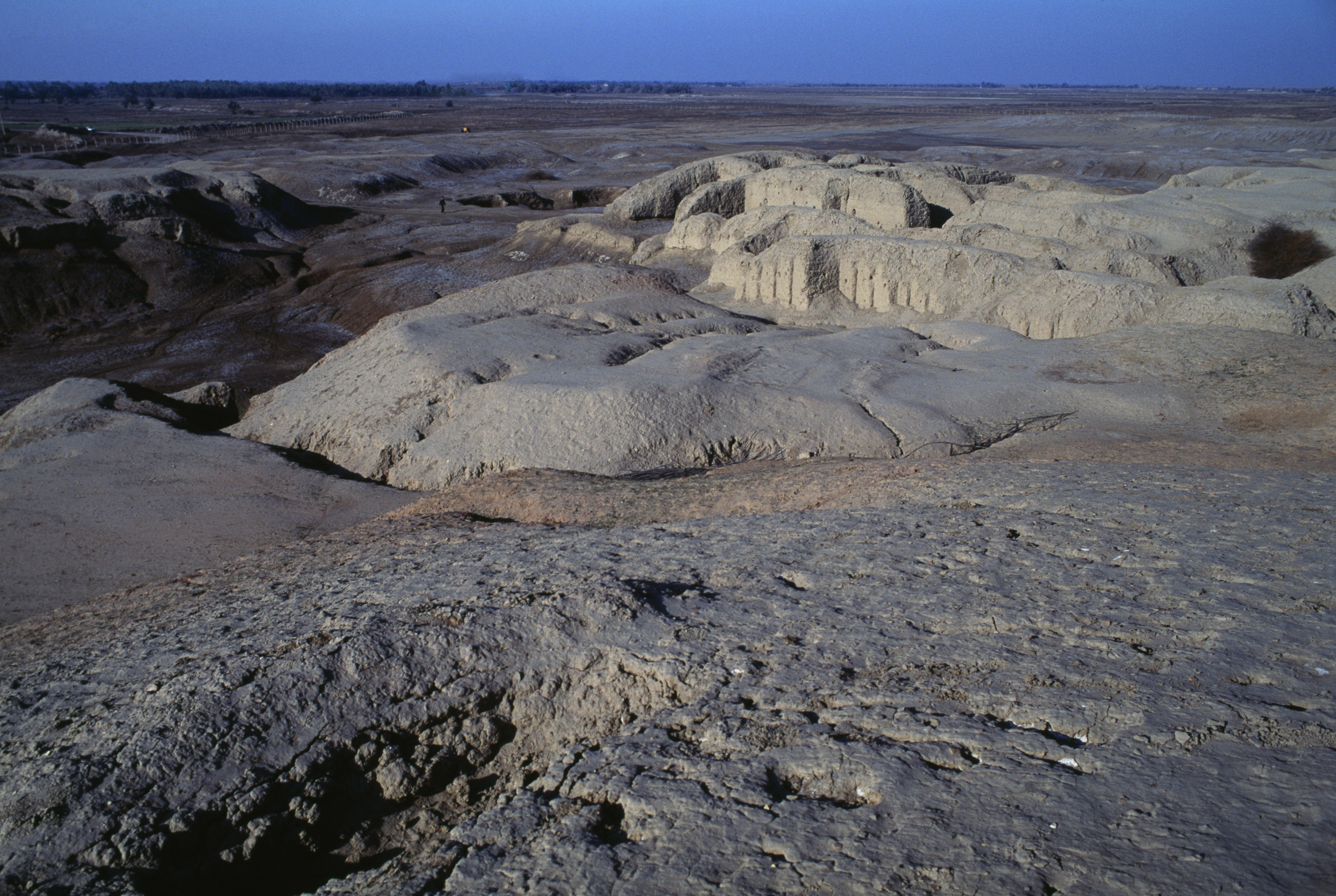 In this lecture, Benjamin traces the 5,000 years of prehistory between 10,000 BC (when humans first adopted agriculture) and 5,000 BC (when the first cities arose). For the first 5,000 years human beings could only produce limited food through agriculture and had to supplement their intake through hunting and fishing.

With slash and burn agriculture, practiced in many areas of the world, villagers moved to new territory when soil fertility was exhausted or when populations grew to large too feed from existing gardens.

During this period a typical village consisted of 24 to 100 dwellings. Some villages were much larger if they had special spiritual significance or an exceptional water source or they became a trading center.

According to archeologists, there is no evidence of hierarchy, power structures or warfare in villages dating from this period. Wealth and power seems to have been shared equally between residents, regardless of sex or social status.

The first cities emerged in Afro-Eurasia and the Americas around 5,000 BCE. Their archeological remains are characterized by massive palaces and monuments indicative of powerful leaders with control over substantial resources and many people. According to to Benjamin, these leaders were initially appointed from below to fulfill specific needs, most commonly to wage war against neighboring cities, to mediate with the gods, to organized irrigation projects or to settle disputes between residents. Eventually a leader accumulated sufficient resources to impose power by force.

Benjamin believes the first cities arose owing to a big increase in food production he credits to improved irrigation and the traction power and manure of domesticated animals.

The first agriculture-based cities appeared in Sumer in Mesopotamia adjacent to the Tigris and Euphrates Rivers. Over time, Sumer acquired dozens of cities, with Ur, Uruk and Eredu the most prominent. Uruk, the largest, had a population of 55,000.

Once it was no longer necessary for all residents to produce food to survive, city residents could undertake more specialized work, as craftsmen, potters, scribes, silversmiths, priests, administrators and snake charmers. It’s also clear that large numbers of slaves were needed to build walls, large buildings, monuments, and irrigation systems and to clean streets and dispose of garbage. In addition, a regular system of taxation or tribute to finance, city administration, temples and armies, as well as leaders extravagant lifestyles.

Writing was also central to city life to keep tract of taxes, tribute and administrative decisions.

This documentary is about the environmental degradation of the Middle East’s most famous rivers, the Tigris and the Euphrates. The intersection of the two rivers, referred to as the Fertile Crescent, is celebrated as the birthplace of the agricultural revolution and the first human settlements.

The two rivers join in southern Iraq to form the Shatt-al-Arab, which empties into the Arabian Sea. The marshes along the Shatt were previously home to 200,000 “Marsh Arabs,” who worked as fishermen until Saddam Hussein drained the marshes in the 1950s. He reportedly did so to punish them for criticizing his regime.

The marshes were re-flooded in 2003, following the fall of Saddam. According to the UN, the wetlands habitat has only partially recovered (37%). This relates in part to dams on the upper Euphrates in Turkey and Syria. The latter have cut water levels in the Iraq segment of the Euphrates (making it more saline) by 50%. The river is also contaminated by industrial waste, agricultural runoff, human sewage, old rusting fishing vessels and the environmental damage resulting from nearly 30 years of US bombing campaigns (starting with the first US invasion in 1992).

Only 5,000 fisherman remain and all struggle to sustain their livelihood. In addition to declining fish stocks, they also face repeated harassment by the Iranian and Kuwaiti coast guard. The harassment stems from unresolved disputes between Iraq, Iran and Kuwait over their sea borders.

Fish stocks are also significantly reduced in the Tigris, which flows through Iraq’s capital city. While Baghdad fishermen are repeatedly hassled by Iraqi security forces, the Tigris is less contaminated and even serves as a source of drinking water.

At present, Iraq must import 60% of their fish, an important Iraqi dietary staple.