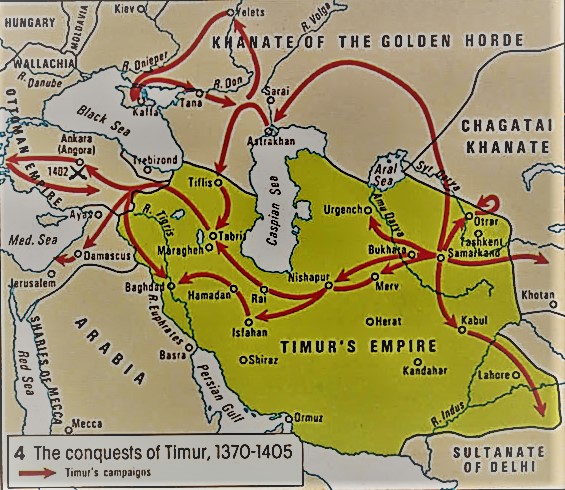 Tamerlane (aka Timur the Lame) limped due to a battle wound received around 1360.  Born outside Samarkand (in modern day Uzbekistan) in the Chagataid Empire, he was a Turk raised in the high Persian culture of Transoxiana. Unrelated to Genghis Khan, he could never be a khan himself. Instead he served as emir to a number of khan figureheads and ran their armies for them. He eventually came to control a 100,000-man army from the central and western steppes.

Between 1381-1405, he embarked on seven military campaigns, characterized by shocking barbarity and mainly directly at other Muslims.

In 1381, he secured control of Samarkand after 11 years of brutal battle.

Between 1391-92, he launched a campaign to destroy the Golden Horde after they thwarted several of his military campaigns in the Ilkhanate and Changataid Empire. Invading from the South, he first had to defeat Armenia, Georgia and the Egyptian Mamaluks. When he put one of his vassals on the Golden Horde throne in 1391, the Mamaluks and Ottoman Empire allied to regain the throne for the Golden Horde.

Tamerlane won a significant victory against the Ottoman Empire at Angora in 1402, capturing the Ottoman sultan (who dies in captivity). With no administrative background, he proved unprepared to hold power and eventually surrendered the Ottoman throne.

After capturing the Silk Road cities of Iran, he marched his his troops southeast, sacking the Muslim cities of Delhi and Lahore. After launching a second campaign against India in 1403, he became ill and died.

Tamerlane’s military assaults leveled Baghdad, which changed hands four times, twice. This effectively transferred authority over Sunni Islam (which they retained until 1924) from the Abbasid Caliphate to the caliphs of the Ottoman Empire

Babur, Tamerlane’s son (and a direct descendant of Genghis Khan on his mother’s side) would continue his father’s campaign in India, ultimately creating the Moghul Empire.