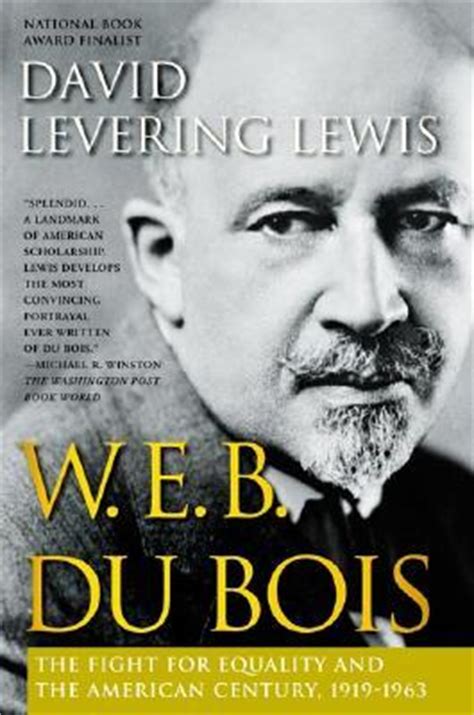 Although Lewis depicts the early civil rights activist as personally flawed, he also heavily emphasizes his amazing flexible intellect. Even in advanced age, DuBois had a remarkable ability to adjust his world view with changing political circumstances. changed.

As Lewis puts it:

In the course of his long, turbulent, career, then, W E B Du Bois attempted virtually every possible solution to the problem of twentieth-century racism – scholarship, propaganda, integration, cultural and economic separatism, politics, international communism, expatriation and third world solidarity. First had come culture and education for the elites, then the ballot for the masses; then economic democracy; and finally all these solutions in the services of a global ideal of economic and social justice.

Volume two begins after World War I,  when Du Bois was the founder and editor of the NAACP (National Association for the Advancement of Colored People) magazine The Crisis: A Report of the Darker races. Initially DuBois fully supported the NAACP agenda to address racism by installing as many “Talented Tenth”* African Americans as possible in academic and professional positions. The NAACP reasoning was that professional African Americans would use their economic power and political influence to improve the lot of the Black masses.

In 1934, a dispute over his promotion of Black economic independence (which violated the NAACP’s strict de-segregation policy) and his growing interest in Marxism led to his resignation from the NAACP to teach at Atlanta University. Following the termination of his Atlanta University contract in 1944 (he was 74), he returned to the NAACP and his prior leadership role in the Pan-African Congress (which he helped found in 1919). He was formally dismissed from the NAACP four years later (just before his 80th birthday), after some of his articles caused the FBI to label the NAACP as a communist front.

In 1951, he was indicted by a grand jury for failing to register the antiwar Peace Information Center (disbanded in 1950) as “the agent of a foreign government.” Although the court dismissed the case, the State Department refused to return his passport until the Supreme Court struck down their policy (in 1958) of suspending passports of political dissidents. In 1961, the first Ghanaian president Kwame Nkrumah offered him a position compiling an Encyclopedia Africana. He joined the Communist Party USA the day before his flight left.

At age 95, he became a Ghanaian citizen when the US, once again, refused to renew his passport. He died a year later.

The book discusses in depth a number of of Du Bois’s significant accomplishments in the second half of his life:

*Talented Tenth – a term devised by white philanthropists designating the “leadership class” of African Americans in the early 20th century.

**As Lewis points out, Garvey was the first civil rights activist to mobilize large masses of poor and working class Blacks, hosting crowds as large as 25,000 in Madison Square Garden.

***Marshall Plan – although ostensibly a humanitarian aid program to war-torn Western Europe, DuBois saw the Marshall Plan as hostile to the Soviet Union (which was excluded, despite taking the brunt of human and economic war casualties) and apt to  polarize East/West relations.