They Went to Stop the Bomb

This documentary concerns a 1973 protest voyage from New Zealand to the Pacific atoll Mururoa. The aim was to prevent the French from continuing their atmospheric nuclear tests there. The tests, begun in 1966, contaminated the drinking water and crops of the Tureia 50 kilometers (0.62 miles) away. Large numbers of Tureia residents developed leukemia, thyroid and other cancers and experiences miscarriages and birth defects. Strontium 90 from the Pacific testing was detected as far away as Peru, Africa and New Zealand.

The films begins by exploring the birth of antinuclear movement in France and Tahiti (the military base for Pacific nuclear testing). Without approval from the French parliament, the tests (46 between 1966-74) were technically illegal. Although de Gaulle’s government publicly denied the tests were harmful to human health, defense documents declassified in 2013 revealed they were secretly monitoring the blood of Tureia residents for  radionucleotides and corresponding health problems.

The French government also engaged in “psych-ops” against Tahitian activists opposed to the testing. In addition to using the French and Tahitian media, they also framed and and imprisoned the former Tahitian president on false corruption charges.

The protest flotilla was led by the Fri, which means freedom in Danish. It was crewed by 13 antinuclear activists from the US, France, the Netherlands, Britain and New Zealand.

The Fri never reached Mururoa because the French Navy illegally boarded the vessel in international waters, arresting the activists and imprisoning them in Tahiti. In a symbolic act In a symbolic act of support, the New Zealand government send its Navy frigate HMNZS Otago into the test zone area. The latter broke the news of the activists’ arrest to the world press.

Beginning in 1977, Greenpeace undertook similar protest voyages to French Polynesia in the Rainbow Warrior. In 1985, French spies planted explosives on the Greenpeace vessel in Auckland Harbor and sunk it (see French Spy Who Helped Bomb Rainbow Warrior Tracked Down 32 Years Later). Although the French temporarily halted subsequent nuclear testing, they provoked international outrage in 1995 with another series of atmospheric tests.*

Residents of Tureia (interviewed in the film) are still waiting for their radiation-related health problems to be acknowledged and addressed by the French government.

*The Comprehensive Nuclear-Test-Ban Treaty, which bans atmospheric nuclear testing, was adopted by the UN General Assembly in 1996. Technically it has not entered into force, as eight countries refuse to ratify it (US, China, North Korea, India, Pakistan, Egypt, Israel and Iran).

Although the film can’t be embedded, it can be viewed free at the Maori TV website: They Went to Stop the Bomb 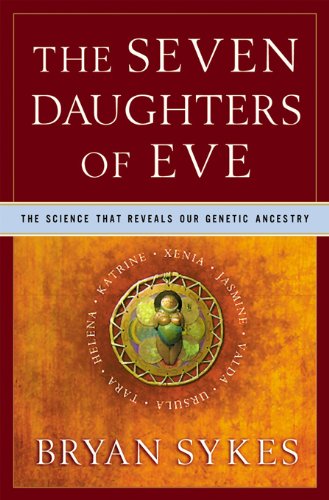 The Seven Daughters of Eve: The Science That Reveals Our Genetic Ancestry

This book is an account of geneticist Bryan Sykes’s discovery of the value of mitochondrial DNA in tracing the maternal lineage of all contemporary human beings to a few dozen cave women. Mitochondrial DNA is unique in that it’s only inherited from the egg (sperm discard their mitochondria once they penetrate the egg). It’s also far less genetically complex than nuclear DNA and only rarely undergoes mutation.

Sykes first used his discovery to establish that Polynesian navigators (including New Zealand Maori) originated from Taiwan or coastal China, and not south America, as claimed by Thor Heyerdahl. Heyerdahl came to public attention after piloting the balsa raft Kon-Tiki from the South American cost to the Tuamotu islands near Tahiti.

Sykes also used mitochondrial DNA to settle a longstanding debate over the origin of Europe’s agricultural revolution. The old view was that Europe’s hunter gatherers had been overwhelmed and displaced by an “invasion” of Middle Eastern farmers. Sykes’s genetic studies revealed otherwise – only about 17% of current Europeans carry typical Middle Eastern mitochondrial DNA. This suggests that Europe’s hunter gatherers gradually learned techniques for domesticating plants and animals from a small number of Middle Eastern farmers.

I had real problems with the final section of the book, in which Sykes fantasizes about each of the seven “daughters of Eve” (aka clan mothers) who are direct ancestors of nearly all people of European ancestry. His reconstructions depart significantly from existing anthropological studies of hunter gatherer societies – especially his portrayal of males heading households of nuclear families, his minimization of women’s roles in domesticating plants and most farm animals, and his heavy emphasis on hunting as the primary source of nutrition among hunter gatherers.

See Patriarchy: An Anthropological Study and Patriarchy: The Crucial Role of Women’s Unpaid Labor Under Capitalism

The Missionaries: God Against the Indians

The Missionaries is a travelogue by British journalist Norman Lewis recounting his visits in the fifties, sixties and seventies to remote regions of Vietnam and Latin America. His purpose is highlighting the systematic genocide of indigenous tribes during this period and the role played by evangelical missionaries (with close CIA collaboration) in evicting native peoples from land US corporations sought to exploit it.

As a prologue, Lewis describes the English invasion and occupation of Tahiti in 1767. English missionaries spent seven fruitless years trying to voluntarily convert native Tahitians to Christianity. They eventually resorted to force, collaborating with colonial police to execute natives who refused to convert and outlaw cultural practices such as dancing, tattooing, surfing and wearing flowers. The usual sentence for engaging in such practices was hard labor on the roads.

Over the next 25 years, the British and French governments successfully colonized all the South Pacific islands and virtually extinguished all native culture.

The book fast forwards to World War II, when the invention of the caterpillar tractor allowed Europeans and Americans to finally penetrate inaccessible jungles in South East Asian and Latin America – enabling them to kill and displace even more indigenous populations.

Lewis focuses mainly on the two most powerful missionary organizations: the Summer Institute of Linguistics (SIL) and the New Tribes Missions (NTM). Both assisted the CIA and their puppet dictators in displacing thousands of indigenous groups from the jungles of Columbia, Peru, Venezuela, Brazil and Paraguay. The evidence he lays out directly implicates these missionary groups in the slaughter (in some cases by aerial bombardment), enslavement and forced prostitution. In most cases, individual  missionaries had their own commercial stake in colonizing these regions (eg selling food to native populations following the destruction of their jungle habitat and hiring out their female children as domestic servants and prostitutes).

The callous attitude (towards the enslavement and extermination of their converts) of these so-called men of God is quite astonishing. They rationalize their actions based on the “inevitability” of native assimilation. If the transition to civilization kills most of them, so much the better. By baptizing them, the missionaries can ensure they go straight to Heaven.

Once Mexico, Ecuador, Brazil, Panama and Columbia ousted their US-sponsored military dictators, all five countries banned both the SIL and the NTM, which were ultimately denounced by both the UN and the Organization of American States (OAS) for violating the UN Genocide Convention.

People can read a more detailed account of the CIA/SIL collaboration to open up Latin America to US corporate interests in Thy Will Be Done the Conquest of the Amazon: Nelson Rockefeller and Evangelism in the Age of Oil