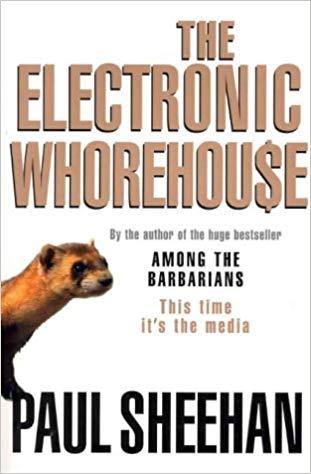 Although 15 years old, this book offers valuable historical insight into the major transformation of traditional media in the 21st century. Paul Sheehan is a columnist and former senior editor for for The Sydney Morning Herald. His book is pretty wide ranging. As a point of departure, he examines the simultaneous rise of Fox News and Alex Jones, just as total network news viewership dropped from 60 to 30%, with a comparable reduction in newspaper readership.

One of Sheehan’s most important points is that the rise of the Internet has ended exclusive control by politicians, bureaucrats, media executives and journalists over the flow of public information. A second relates to the role of Fox News in forging a divergence between the “cultural elite” (represented by the traditional TV networks and CNN) and “mainstreet.” In describing Fox News’ appeal to blue collar white workers and Christian evangelists (almost never reflected in network news coverage – despite representing 46% of the US population), Sheehan eerily foreshadows the Trump phenomenon and the battle currently being played out between Trump and heritage media.

Sheehan goes on to decry the growing blurring between news, opinion and entertainment, as well as the exponential growth of the public relations industry as the source of most western news.

His conservative political bias comes across loud and clear in his diatribe against so-called “economic” refugees*, who he claims cheat the asylum process, and antiglobalization protestors (like myself), who in his view are merely trade unions playing the system for higher wages.

Oh really? That’s news to me – and I’m sure to conservative commentator Patrick Buchanan, as well.

*With the chaos the US and allies have inflicted on Afghanistan, Iraq, Libya, Syria and Yemen, the distinction between “economic” and “political” refugees has become purely arbitrary. When the basic infrastructure of a society has been totally destroyed, the question of basic survival becomes even more acute than if a refugee has received actual death threats.