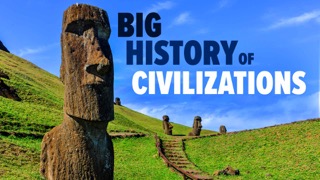 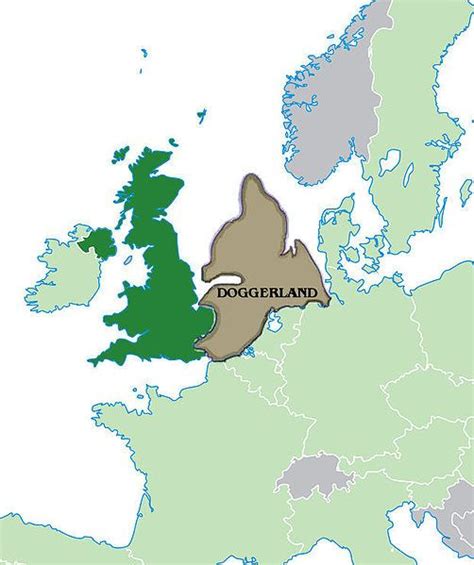 When Doggerland Sank Beneath the Waves: Europe’s Lost World

This documentary concerns the continental shelf that connected Ireland, the UK and Europe during the last Ice Age. The filmmakers date the start of the Paleolithic or Stone Age (ie the first human use of stone tools) to 3.3 million years ago.

In Britain the oldest human remains date from 400,000 – 500,000 years ago. For the most part,  they derive the species Homo neanderthalensis. Neanderthals lived during a period when when several human species roamed planet earth. They became extinct around 35,000 BC.

The first British evidence of modern humans (homo sapiens) dates from 31,000 BC. There’s good evidence these early hunter gatherers traveled hundreds of miles, across the Doggerland* land bridge, following herds of woolly mammoth. They would be forced to retreat to more southern areas of Europe when the last ice sheet covered Britain from 31,000 – 11,000 BC.
As northern Europe began to warm in 3,000 BC, tundra throughout Europe gradually changed to savanna and forestland featuring lions, hyenas, saber tooth tigers, bears, hares, badgers and primitive horses. During the period Doggerland connected Britain to the continent, the Thames flowed into the Seine and Danube Rivers.
Between 8,000 – 6,200 BC, rising sea levels steadily shrank the size of Doggerland. By 7,500 BC, Ireland was a separate island and by 7,000 BC, most of Doggerland were so marshy people could only travel to Europe by boat. The Doggerland Hills remained until 6,200 BC, when evidence suggests they were submerged by a mega-tsunami triggered by a landslide off the Norwegian coast.
*The name Doggerland derives from the Dogger Banks, a shallow region off East Anglia, renowned for abundant fish catches. Dogger is the Dutch word for fisherman.

The World of Stonehenge – Part 3 The Age of Cosmology

The Age of Cosmology describes Britain’s late Neolithic Age between 4,000 and 3,00 BC. The age Stonehenge dates from, this period is mainly characterized by the rise of a priestly class and an interest in spirituality and cosmology. Both Britain and Ireland are home to hundreds of large stone monuments like Stonehenge. They are all astronomically aligned to the summer and winter solstice and are unknown anywhere else. Some of Ireland’s neolithic stone monuments predate the Egyptian pyramids.

In addition to circular stone monuments, archeologists also find remains of large green stone axe “factories” and stone beads from this period, along with evidence of cremation. The latter was reserved for the priestly classes, to hasten their journey to the afterlife.

Archeologists have also found the remains of an indoor stone toilet in the Orkney Islands dating from 3,300 BC.

Surviving Progress is based on Canadian Ronald Wright’s 2004 book A Short History of Progress and takes up where the book leaves off. The book’s main focus is the collapse of historic civilizations due to dangerous technological innovation. It introduces the term (originally coined by German economist Walter Kramer) “progress trap,” to designate technological innovations that have dangerous and unforeseen unintended consequences. An example used in both the book and the film is the case of the wooly mammoth – how new Stone Age techniques that vastly improved efficiency caused the species to become extinct.

The film, in contrast, focuses on our present “progress trap,” and the biological determinants that cause civilizations to produce progress traps. It features a broad range of experts in addition to Wright, including psychologists, geneticists, primatologist Jane Goodell, environmentalist David Suzuki, economist Michael Hudson and astrophysicist Stephen Hawking.

The filmmakers start from the premise that humanity has entered a final progress trap. In the past when civilizations collapsed, homo sapiens simply moved on and started new ones somewhere else. Our present civilization covers the entire planet, and this is no longer possible. The technologies we’ve devised over 200 years have become so ecologically destructive the coming collapse could easily spell the extinction of our species.

The case the Stephen Hawking, the psychologists, geneticists put forward is that our Stone Age brains are incapable of dealing appropriately with advanced technology – that the only conceivable way to prevent collapse is through some kind of human genetic engineering. I have a major problem with any hypothesis that blames the failure of capitalist civilization on human nature. In my experience, it’s not human nature that makes people into greedy, individualistic sociopaths, but an economic system that rewards people for being greedy and competitive and punishes them for being compassionate.

I also had a problem with the way the filmmakers left out half of humanity by designating male competitive behaviors as typical of the entire human species. As geneticist Bryan Sykes argue in Adam’s Curse, the Stone Age reptilian traits described in the documentary are extremely rare in human females (and most males for that matter). In fact, it’s extremely rare for women to commit violent crimes, become tyrants or start wars. (I will post a review of Adam’s Curse later in the week).

I found economist Michael Hudson’s contributions far more valuable. He talks about the role oligarchy, extreme inequality and ecological destruction in causing past civilizations to collapse. He gives the example of Rome, in which confiscation of public land by aristocrats led to rapid overgrazing and topsoil depletion. Two hundred years later Rome collapsed, owing to their inability to feed their empire.