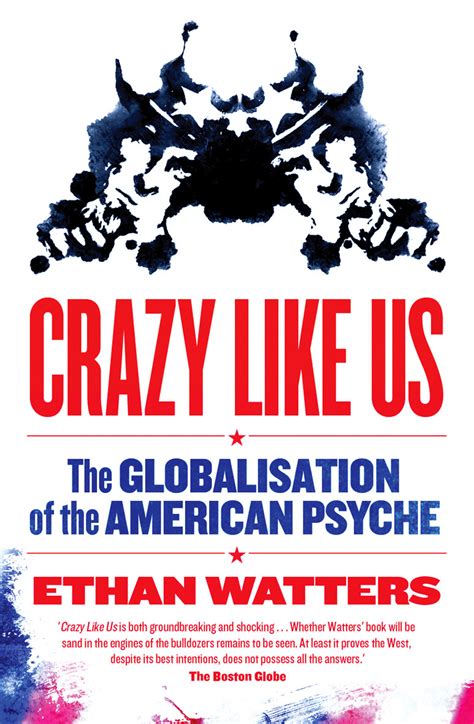 Crazy Like Us: The Globalization of the American Psyche

This book concerns the imposition of American mental health standards across the entire world, including indigenous and Third World cultures. According to Watters, this approach assumes human beings suffer from universal emotional disturbances that are unaffected by cultural beliefs and should be treated “scientifically” like medical conditions. It also advocates the best way to achieve “mental health” is to throw off traditional cultural and social roles and engage in individualist introspection like Americans do.

Watters divides the book into five sections: the first concerns the global commodification of anorexia, the second the global commodification of post traumatic stress disorder; the third the distinctly different presentation, management and outcome of schizophrenia in Zanzibar and other African countries; and the the fourth the corporate marketing of “clinical depression” and serotonin reuptake inhibitors (SSRIs) in Japan.

Part 1 mainly looks at the changing presentation of anorexia nervosa since the first case report in 1823. Back then anorexics were low income with somatic fixations of fullness and pain in the upper abdomen. During the 19th century, distressed middle class women were more likely to present psychiatrists with psychosomatic conditions, such as hysterical blindness or paralysis.

Owing to a complex  process Watters refers to as “symptom negotiation,” women presented with these conditions because psychiatrists recognized them as symptomatic of emotional distress. After World War II, it became more acceptable for women to acknowledge feelings of depression and anxiety and and diagnoses of hysteria became exceedingly rare.

Rare in Hong Kong prior to 2000, anorexia diagnoses followed the original European pattern and were limited to low income women complaining of abdominal discomfort. Thanks to the growing influence of Western media, more recently Hong Kong anorexics present a more Western pattern involving distorted body image and a fatal obsession to be as thin as glamorous Western models and movie stars.

Part 2 mainly looks at the army of Western traumatologists who have descended on every global trauma side since the 2005 tsunami in Sri Lanka. The result has been rowing evidence that, contrary to popular belief, early psychological intervention does not prevent the development of later PTSD. Watters is critical of professionals who fail to recognize that PTSD is a distinctly American and individualist way of suffering for  society that has almost completely lost natural social mechanisms for coping with tragedy.

Part 3 looks at the the tendency in Zanzibar (and other African countries) to regard symptoms of schizophrenia* as evidence of spirit possession. The effect of this approach is to keep the so-called “schizophrenic” within their natural social group, rather than excommunicating them, as occurs in the West. This consistently results in a far better treatment outcome.

Part 4 looks at the big spike in suicides (more than 30,000 per year) in Japan during their brutal 1990s recession. Traditionally Japanese culture has long supported the philosophical belief that suicide is a perfectly sane and legitimate act of personal will. However thanks to a massive marketing campaign Glaxo Smith Klein (manufacturer of the SSRI Paxil), the Japanese were trained to link suicidal thoughts and personal suffering with clinical depression and seek Paxil prescriptions.

This, despite three decades of outcome studies showing Paxil is no better than placebo in alleviating depression and increases suicide risk in adolescents.

*Schizophrenia is a condition characterized by delusions, hallucinations, disorganized speech or behavior and flat affect.

Offline is the New Luxury

This documentary is about taking back control of our Internet connectivity. Ironically it starts by recommending a new app that allows you to identify increasingly rare “white spots” – areas of the earth that aren’t blanketed with WiFi signals. One MIT psychology professor, who bans cellphones, laptops and tablets in her classes, is part of a movement to create sacred spaces in these white spots – areas where people fully engage with each other instead of their electronic devices.

The filmmakers also talk about the late Steve Jobs and other prominent Silicon Valley moguls not allowing their kids to have cellphones and tablets and sending them to low tech Montessori and Waldorf schools. Increasingly the well-to-do are seeking out expensive retreats and detox facilities to cure their Internet addiction. While growing numbers of law firms and security agencies patronize a highly successful Dutch firm selling Faraday cages and microwave shields to protect clients from electronic snooping and damaging microwave radiation.

The Amish, of course, have a cheap low-tech solution to Internet addiction – namely a value system that rejects most advanced electronic technology.

The video concludes by explaining the concept of “surveillance capitalism,” in which our personal information is “monetized,” ie in which the data Google, Facebook and Amazon collect on us is sold to advertisers.

A key strategy of surveillance capitalism is to use drones, satellites and giant balloons to expand connectivity to remote areas of the developing world. At the time of filming, Facebook was pressuring the Indian government to allow the introduction of Free Basics (free Internet connectivity) to all Indian residents, with Facebook retaining control of their Internet access. Google, meanwhile, is pushing to extend 100% connectivity to Sri Lanka by launching giant WiFi balloons.

According to one analyst, the drive to acquire massive troves of Indian personal data is a ploy to placate shareholders. The latter are understandably concerned about a drop-off in Facebook users in the developing world – due to privacy concerns and the recognition that most Facebook content is meaningless drivel.