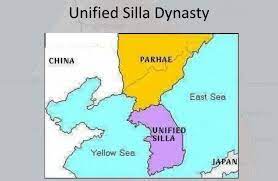 After allying with the Tang Dynasty to defeat the Kuguyo and Paechche,* the Silla Dynasty repelled attempts to establish a Tang colony on the Korean peninsula. Continuing to rule the southern Korean peninsula from 57 BC to 935 AD. In 721 AD, they built a strong defensive wall (in the vicinity of Korea’s current Demilitarized Zone dividing North an South Korea) against the Parhae kingdom. The latter was formed by Kuguyo refugees fleeing the Silla army.

Eventually both the Parhae and Silla kingdoms agreed to pay tribute to the Tang Dynasty to fend off further military incursions. Chinese cultural influence in both states was massive, with thousands of Buddhist monks and students traveling to the Tang capitol Chang’an to study. Kongju, the capitol of Silla, was laid out in a grid pattern just like Chinese cities.

In Silla members of the nobility, limited to members of the True Bone Clan, could own as many as 3,000 slaves. In 788 AD, Silla adopted a Confucian civil service exam for allocating government appointments, but only members of the True Bone Clan were allowed to take it.** Low born Silla intellectuals, referring to themselves as the Head Rank Six, tended to push back against Chinese influence by promoting native Korean culture. The latter featured a knowledge of advanced math used to build an astronomical observatory and Buddhist temples, highly advanced wood block printing  and enormous cast bronze bells that were far superior to anything produced in China or Japan.

Determined to break the power of the monarchy, the Head Rank Six led a 20-year rebellion in the late 9th century, leading to the eventual collapse of the dynasty. During a 150-year period of great instability, the nobility ceased fighting each other for throne to focus on a flourishing trade with China. Referred to as the Castle Lords, they abandoned the capitol to establish castles around the coast they defended with their own private armies.

Significant events during this lengthy period of instability include

The abdication of the last Silla king in 935 AD in favor of Wang Kon (later known as King Taejo), who went on to reunify the entire peninsula. The Koryo dynasty he established (from which the modern name Korea is derived) would rule unified Korea for 500 years.

**Many Silla farmers and artisans were debt-slaves.

***Confucius advocated for government to accept qualified officials from all social classes.

Film can be viewed free with library card on Kanopy