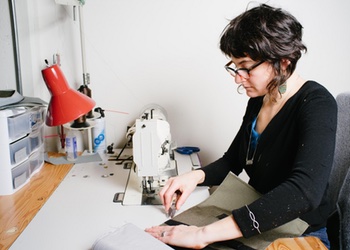 The creation of the World Trade Organization in 1995 would lead hundreds of US corporations to shut down their American factories and “offshore” them to third world countries with lower wages and fewer environmental regulations. This trend was most pronounced in the textile and clothing industry. Between 1900 and 2011, US employment in apparel manufacturing dropped by over 80% from 900,000 to 150,000 jobs.

Thanks to the largely grassroots relocalization movement, this trend seems to be reversing. According to economist and author Michael Shuman, rebuilding local economies devastated by trade deregulation is one of the most effective tools for dismantling corporate rule. For every dollar spent in a local business, 45 cents remains in the local economy – in contrast to 10 cents for every dollar spent in a corporate retail chain. (See 2010 Harvard Business Review)

While most local economy activism has focused on food production and banking, the last decade has also witnessed numerous attempts across the US to “reshore” sewn goods production. Efforts in New York, Los Angeles, Detroit and Portland have been the most successful. Consumer research suggests the most important driver behind this movement has been growing consumer demand for corporate transparency and accountability. A  2014 Nielson Survey reveals that 42% of consumers are “willing to pay more for products and services provided by companies committed to positive social and environmental impacts.”

Consumers are also increasingly concerned about the environmental profile of the textile and clothing industry, the world’s second most polluting industry (behind oil). Third world dying mills, which use 200 tons of water for one ton of fabric, cause serious contamination when they return the water to local rivers untreated.

They’re also really wary of a particularly environmentally destructive trend known as “fast fashion”. The latter produces cheap, poorly constructed clothing to be worn once or twice and discarded.

Seattle is the latest city to attempt to foster the development of a local sewn goods industry. In 2015, the Seattle Good Business Network (SGBN)* received a Duwamish River Opportunity Grant to investigate opportunities for expansion of sewn goods manufacture in Seattle.

Sewn Goods Case Studies by Rachel Beck and Molly Parkhan, the report of this investigation, is a fascinating read. I was particularly intrigued by their detailed descriptions of the origins thriving sewn goods industries in New York, Los Angeles, Detroit and Portland. The report finishes with some optimistic predictions and solid recommendations for the successful expansion of Seattle’s local sewn goods industry.

*Founded in 2010, SGBN is a “network of residents, local businesses and non profit and municipal organizations dedicated to building a vibrant and sustainable local economy based on shared environmental and community values.”