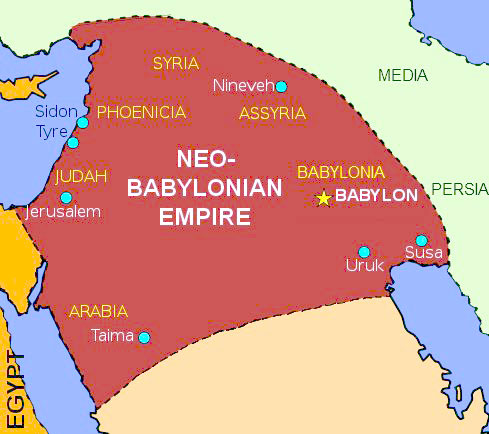 At the time of its collapse the Assyrian empire, the largest the world had known, extended across Mesopotamia, Syria, Levant and parts of Anatolia.

Assyria became more unstable during the last century before its final collapse in 612 BC. Provincial kings had allowed provincial governors to become too independent, and civil rebellions were widespread. King Tiglath-Pilesur III (745-727 BC) temporarily increased the king’s power by making provinces smaller, appointing governors who directly accountable to the king and improved provincial communication (with horses and teams of rides). However he proved unable to prevent Assyria’s eventual downfall.

The province of Babylonia enjoyed special privileges under Assyrian rule (see The Special Status of Babylonia Under Assyrian Rule), with the whole empire adopting its language (Akkadian) and religion. In fact, it was common for either the king or his son to rule Babylonia directly. This changed after the death of Tiglath-Pilesur III, with the Babylonian throne changing hands 20 times in 100 years.

Under the reign of Sennacherib (704-681 BC), the Elamites supported a Babylonian revolt against Assyria and installation of their own king. Sennacherib’s army invaded to suppress the revolt and put his own son on the Babylonian thrown. A second invasion became necessary when the son was “disappeared” and a coalition of Babylonian. This time Elamite and Chaldean [1] forces fought Sennacherib’s army to a standstill.

In 689 BC, Sennacherib laid siege to the city of Babylon for 15 months, eventually decimating it palaces and temples. Worse still the the statue of the king of the gods Marduk was moved to the capitol of Assyria. Until it was returned in 668 BC, the annual reconsecration ceremony ceased to occur and Babylonia lacked (in the view of the population) a true king,

In 687 BC Sennacherib was assassinated by his sons, resulting in the first of many Assyrian civil wars.

In 671 Assyria conquered Egypt for the first time. They ruled the the country until 669 BC, when southern Egypt rebelled. Subsequent campaigns to retake southern Egypt were expensive and unsuccessful.

Following his death, his son Ashur-etil-ilani became king of Assyria and installed his brother on the throne of Babylonia. Assisted by the Elamites, his brother led an uprising against Assyrian rule in 640 BC.

In 617 BC, the Babylonian king, with the support of Elamites and the Medes, [3] Babylonia invaded Assyria proper and conquered several regions west of the Euphrates.

In 612 BC, this coalition sacked Nineveh, [4] the new capitol of Assyria, with Babylonia taking control of much of Assyria – forming the Neo-Babylonian Empire.

[1] Chaldea was a small country that between the late 10th or early 9th and mid-6th centuries BC, whose population was assimilated into the indigenous population of Babylonia

[2] Ruled a loose coalition of city states in Media.

[4] Ashurbanipal moved the capitol of Assyria to Nineveh around 700 BC. At time it was sacked, it was the largest city in the world (est pop 230,000).

History of the World Part 2

Part 2 of the BBC “History of the World” series covers the rise of the first western empires. This is commonly referred to as “ancient history,” a subject no longer taught in US schools (recently, however, it seems to be a popular topic for Hollywood features films). Although the reenactments in Part 2 are shorter and more plausible, Part 2’s failure to cover non-Western empires is a serious weakness.

The empires described include

Part 2 goes on covers the rise of democracy in the city-state of Athens in the 6th century BC and their successful rebuff of a much larger Persian army that tried to conquer them.

This episode also explores the life and teachings of Gautama Buddha (5th-6th century BC) in India, Confucius (551-479 BC) in China and Socrates (470-399 BC) in Athens. All three promoted philosophies that were at odds with the violent and hierarchical empire building of the times.