I am very honored to publish a guest post from the Inside Syria Media Center on the latest US airstrike against Syria.

On June 6, the U.S.-led International Coalition jets once again attacked the Syrian Arab Army (SAA) positions in southeastern countryside of the Homs Governorate, targeting a unit advancing towards the Al-Tanf Crossing. At least two SAA servicemen were killed and over 15 were badly wounded.

This is not the first time the United States has attacked government forces positions. Previously on May 18, they carried out a similar attack and killed a number of soldiers and destroyed several vehicles.

The Syrian Defense Ministry immediately assessed the incident and released a statement. They assert this aggression confirms once again the coalition’s support for terrorism at a time when SAA and its allies are making daily progress in fighting the ISIS terrorist organization. U.S. aggression has led to military escalation situation in the region, and Syrian authorities have called on the coalition not to not carry out such aggressive actions under any pretext.

Moreover, a number of states have condemned the U.S. strike. In particular Iran sharply criticized the incident. Secretary of Iran’s Supreme National Security Council Ali Shamkhani stated that such an aggression and strengthening the presence of armed forces in the Arab country will only deepen the ongoing crisis.

In actuality, the U.S. military campaign in Syria has accomplished nothing but numerous civilian casualties and the disruption of key urban infrastructure. Americans have invaded sovereign Syrian territory under the pretext of fighting terrorist organizations. However Raqqa, which they have been trying to liberate with Kurdish support since last November, is still under ISIS control.

Trying to justify the air strike, the Pentagon claimed it was carried out in order to secure its own military base. Allegedly U.S. military instructors are teaching the local population how to fight terrorists on this base. However, nobody can guaranty that after completing the U.S. training the trainees will fight terrorists rather than the Syrian government.

Using the military base to justify the attack also raises some obvious questions. At the time of the attack, Syrian troops were at a distance of 50 kilometers from the US base. Technologically they possessed no weapons effective at this distance.

Despite the barbarous attempts of the Western countries to prevent the political settlement of the Syrian crisis, the Syrian army and its true allies must continue its large-scale offensive against ISIS and other terrorist groups across the whole country. Only they have a legal right to fight for the freedom and independence of their own state.

Follow the latest developments by reading Inside Syria Media Center. 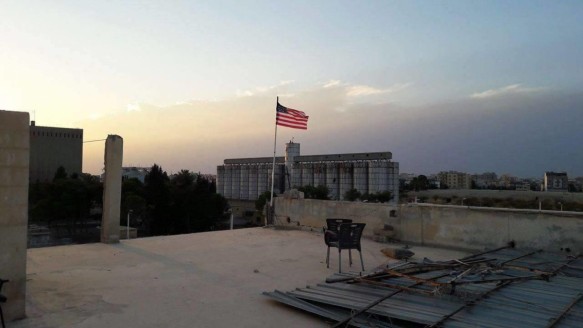 A new batch of U.S. special forces have entered Syria through Turkey and set up camp at the Al-Monbath hill in the countryside of Tell Abyad, a Kurdish-held region north of Raqqa.

In total, 50 American troops – 10 of which are classified as combat advisors – are stationed at the base. The crew is armed to the teeth with heavy weaponry and accompanied by 17 armored vehicles. Communication equipment has been set up while U.S. flags have somewhat controversially been hoisted at the base.