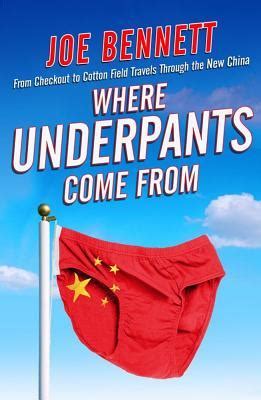 Where Underpants Come From: From Checkout to Cotton Field – Travels Through the New China

Although Where Underpants Come From is primarily a travelogue, the format makes a unique statement about the relationship between Western countries and the country that makes the vast majority of their underwear – namely the Peoples Republic of China.

Bennett got the idea for the book after buying a five-pack of briefs at the Warehouse discount store (the New Zealand equivalent of Fred Meyer or K-Mart). Founded in 1982, the Warehouse’s massive commercial success relates directly to the success of China’s booming low wage economy. Only by paying the women who make our underwear a few pennies apiece, can a store charge 1.70 New Zealand dollars ($1.12 US) for a product they transport halfway around the world – and still make a profit.

According to Bennett, TWL (The Warehouse Limited) has a large, well organized Chinese operation that emphasizes both Corporate Social Responsibility* and Quality Control. TWL’s aim is to run an establishment that approaches Western standards of employment and manufacturing, largely because western-style corporate regulation is virtually non-existent in China.

In tracing  the cotton fabric, elastic and thread used to make his underpants, Bennett starts at the factory where they were assembled in Quanzhou, a port city of 7 1/2 million (in 2008) on the Taiwan Strait in southern China. Noting that none of underwear manufactured there remains in China, Bennett also comments on the mass migration of young Chinese workers from rural Sichuan Province to work in Quanzhou, following similar patterns found in other Chinese manufacturing cities.  He presciently predicts Western corporate brands will eventually move their factories to cheaper labor markets (as has occurred over the past five years).

Bennett next travels to Thailand to trace the elastic in his underwear to the trees that produced the rubber (to make elastic, polyester thread is wound around a thick strand of rubber, which is subsequently knitted).

By traveling to the Xianjiang Uygur Autonomous Region in western China, he sees where the cotton was grown, and, in Urumqi, the factory where it was spun into thread and knit into fabric. In 2008, the same factory produced 60 million cotton knit shirts a year for exclusive brands such as Polo, Nike, Hugo Boss and Tommy Hilfiger. Two-thirds of the shirts produced there go to the US and the rest to Europe. China is forced to import foreign cotton to accommodate this quantity.

I found some of Bennett’s political commentary naive and irritating, for example his efforts to contrast Japan’s post-World War II economic boom with China’s struggling economy under Mao. Bennett is totally oblivious to the massive price (in terms of human rights) Japan paid for their so-called economic miracle under US and CIA occupation. The late Chalmers Johnson documents this quite eloquently in his 2000 book Blowback. I also disagree with Bennett’s blanket statement that “racism is evolutionarily instinctive.” This totally ignores the obvious impact of European colonization on modern racist ideology.

That being said, the book includes a valuable summary of China’s 3,000 year history as the world’s most advanced civilization, with the Chinese inventing the compass, the deep drill, lock gates, cast iron, the wheelbarrow, the suspension bridge, block printing, the loom, water power a winnowing machine at least 1,000 years before the West. I totally agree with Bennett’s assessment (in describing the British opium wars that led to Western colonization of China) that most modern wealth derives from conquest and theft.

*TWL requires all workers at it Quanzhou factory be at least 16 and work no more than 60 hours a week.

**During US military occupation the CIA installed war criminals to run Japan’s government and secretly funded single party rule and suppression of human rights (by the Liberal Democratic Party) from 1949-63. See The Long US War Against the Third World