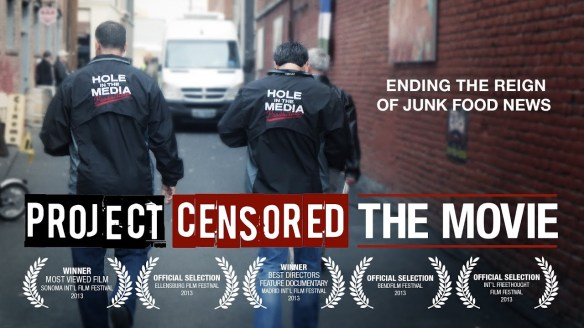 This documentary explores the history of Project Censored, as well as its importance in the current political climate. Started in 1976, the project is run by Sonoma State University faculty and students. The atrocious mainstream media coverage of Watergate was the original impetus for the project. Media collusion in failing to cover the break-in to Democratic headquarters allowed Nixon to win a landslide victory despite a scandal that ultimately forced him to resign.

Each year Sonoma State students research censored news stories, and faculty, community advisors, and prominent journalists and commentators vote on the 25 most important stories. The best 25 are published in an annual compendium. In 2000, Project Censored was opened to affiliate university programs across the US.

The filmmakers emphasize the disastrous effects of handing the mainstream media over to monopoly corporations. Because the latter use it chiefly to promote their other financial interests (eg defense contractor GE owns NBC), most of what passes for news is either titillating entertainment or pure government or Wall Street propaganda. A Project Censored faculty member cites a recent study revealing only 24 seconds of an average 30-minute news broadcast covers real issues affecting viewers.

Most media critics agree that the de facto repeal of the Bill of Rights (especially the right to habeas corpus) and the most important censored story of the last decade.*

*Bond the virtual appeal of the 1st, 4th, 5th, and 6th amendments, the filmmakers detail additional evidence the US government (as of 2013) was already preparing to declare martial law: by placing US troops on standby to enter US cities, increasing the size and number of large detention centers, and enacting laws enabling asset seizure of antiwar protestors, banning pro bono legal representation, etc.

The film can be viewed free at https://www.filmsforaction.org/watch/project-censored-the-movie/

In following video, Peter Phillips from Project Censored lays out exactly how the richest one-thousandth of 1% maintain iron control over all world governments.

He cites a study Project Censored published in their Top 25 Censored Stories of 2012-2013 edition of the world’s most “integrated”* corporations and those with the largest financial asset concentration.

The 161 board members of the top 13 companies control $28 trillion of wealth. They also help the 1% hide another $30 trillion offshore so it can’t be taxed.

They work with secret (and not so secret) groups, such as the Council on Foreign Relations, the Trilateral Commission, the Bilderberg Group, the Bohemian Grove, the World Economic Forum, the G7, the G20, the International Monetary Fund and the World Bank to ensure that the domestic and foreign policy of all western governments benefits themselves and the capitalist investors they represent.

They also ensure that the national security state, busy killing people in 130 countries, acts in the exclusive interest of transnational capital. The fascist coup they engineered in Ukraine is only the most recent example.

They regularly engage in illegal conspiracies but are always too big and powerful to jail.

Here are the top 13 companies identified in the study:

*The researchers use the term “integrated” to describe financial corporations with major holdings in key  non-financial sectors (i.e. energy, defense and mass media).