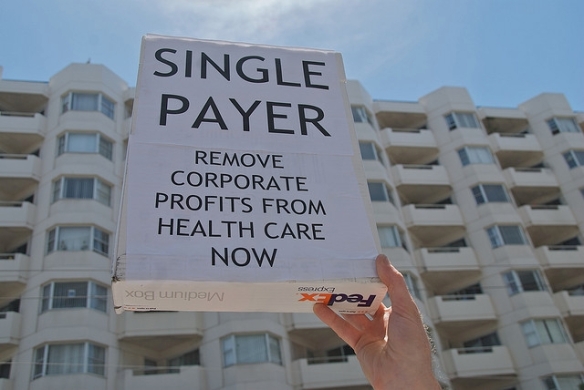 In 2011, the Vermont legislature enacted Act 48, which replaces private health insurance with a state-funded health care plan covering all Vermont residents. Governor Peter Shumlin, concerned about major flaws in Obamacare, made Green Mountain Care, the centerpiece of his 2010 gubernatorial campaign. In Vermont, as in the rest of the industrialized world, health care is viewed as a basic human right. Green Mountain Care is slated to become operational in 2017.

Like a growing number of Americans, Schumlin feels Obama’s Affordable Health Care Act (ACA) is financially unworkable. Instead of eliminating private insurance companies that suck out  25-33% of every health care dollar for profit and administrative expense* – it guarantees them generous government subsidies.

The US is the only country in the world which allows for-profit insurance companies to insert themselves into the doctor-patient relationship by dictating the types and amount of treatment that will be allowed. Because they allow insurance and drug companies to transform health care into a profit-making commodity, Americans pay twice as much for health care than any other country. Meanwhile they enjoy much poorer health than most of the industrialized world.

In part due to skyrocketing insurance costs under Obamacare (premiums for young adults have nearly doubled), millions of low income Americans remain uninsured. The Congressional Budget estimates that 36 million people will be uninsured in 2015, 30 million in 2016 and 31 million in 2024.

Meanwhile all Americans find the private insurance plans they are required to to buy, under penalty of law, cover far less than Obama originally promised. With the high cost of premiums, deductibles and copayments, they pay more and more of their health care bill themselves.  It doesn’t help that insurance companies are extremely devious about what they do and don’t cover. As many doctors and patients are discovering, the default setting for many health plans is to deny payment.

In 2011 Harvard economist William Hsaio estimated that removing private insurance companies from the health care equation, as stipulated under Vermont’s Act 48, would save $4.3 billion over four years – enough to cover the uninsured, offer better coverage than insurance companies and still have more than a billion dollars left over.

Under Green Mountain Care, a combination of income and payroll taxes (details to be released in January 2015) will replace the $1.9 billion in health insurance premiums Vermonters currently pay. Residents covered by federal plans, such as Medicare, Medicaid, the VA and programs for active duty military personnel would continue to receive coverage through those plans. However, for the sake of administrative efficiency, both Medicare and Medicaid would be streamlined into Green Mountain Care’s unified claims administrative system.

Vermont would be the first state to guarantee health coverage for all its residents, regardless of income. As Michael Ollove notes in Vermont is Single Payer Trailblazer, they were also the first state to constitutionally ban slavery and mandate public funding for universal education, the first to introduce civil unions for same-sex couples and the first to allow gay marriage.