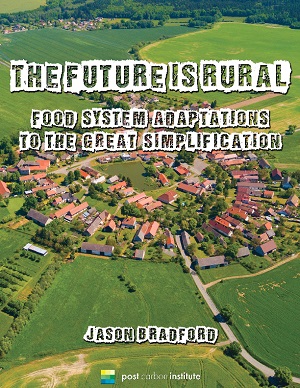 The Future is Rural: Food System Adaptation to the Great Simplification

Free PDF: The Future is Rural

This recent publication by the Post Carbon Institute disputes the common mainstream assertion that migration towards urban areas will continue to increase in coming decades. Instead it offers compelling arguments (based on substantive research) that the transition away from fossil fuels will reverse the current demographic flow, resulting in major “de-urbanization.”

Bradford’s prediction of a major migration from urban to rural areas is based mainly on the inability (owing to higher costs) of renewable energy to fully substitute for cheap fossil fuels. He asserts there will be less energy available to move food into cities from the countryside, as well as less energy to move wastes in the opposite direction. Thus he predicts a growing number of city dwellers will be forced to relocate to ensure continuing access to food.

Bradford argues that despite its current low cost, a total transition to renewable energy will result in higher costs because

1) most renewable sources are intermittent and energy storage tends to be expensive.

3) renewable energy has a much larger geographic footprint (ie requires a larger land areas) than fossil fuels. While renewables have a much lower environmental impact, capturing renewable energy on a massive scale will require careful planning so as not to interfere with food production.

The good news is that increasing automation will also shift job availability from cities to rural areas, as the loss of cheap energy leads farmers to once again rely more on human and animal labor.

The book is mainly a compilation of research related to fossil-fuel free localized food production. It seems to cover all the basis, including permaculture; biointensive farming; no-till soil management; perennial polycultures and natural systems agriculture; and fermentation and other ancient food preservation techniques.

Bradford also devotes a chapter to exploring what the food system transition will look like.