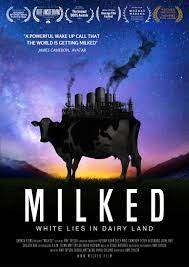 MILKED is a feature documentary that exposes the whitewash of New Zealand’s multi-billion-dollar dairy industry. Māori activist Chris Huriwai travels around the country searching for the truth about how this source of national pride has become the biggest threat to the environment and to the farmers it exploits.

New Zealand is the world’s largest dairy exporter, and Fonterra, a former farmer’s cooperative that opened up shares to non-farmer investors in 2012.

According to several environmentalists interviewed in the film, dairy intensification is rapidly depleting New Zealand’s topsoil (by 193 million tonnes annually), while despoiling its streams, rivers, lakes and land with cancer-causing nitrates that will make it difficult for farmers to transition to other crops. New Zealand is also a major contributor to deforestation in South East Asia owing to the two million tonnes of palm kernel it imports per year (for its supposedly “grass fed” dairy herds).

Milk is heavily marketed to Māori, who have highest level of milk consumption in the world – and 80% more prostate cancer than New Zealand Europeans. Ironically Fonterra also heavily markets their dairy exports to China, India and South East Asia, where nearly 100% of residents also lack the ability to digest lactose.

Fonterra officials refused to to be interviewed for this documentary. However numerous farmers, including a representative of Federated Farmers, were willing to talk to Hurawai.  Despite working from 3:30 am to 7 pm seven days a week, New Zealand’s dairy farmers are struggling to repay roughly $38 billion of debt. Totally demoralized by increasing costs for fuel, fertilizer and palm kernel, 167 have committed suicide in the past ten years.

Hurawai also interviews several former dairy farmers who have escaped the rat race by transitioning to new crops. The most promising seems to be hemp. Although hemp absorbs four times as much CO2 as pine, the New Zealand government (owing to heavy Fonterra lobbying), refuses to open its carbon emission trading scheme to hemp farmers.

The end of the film suggests that New Zealand farmers may be forced to transition away from dairy if Silicon Valley successfully scales up its ability to produce milk and other dairy products cheaply via fermentation (with genetically modified bacteria). As natural dairy products are far more expensive to produce, this could collapse New Zealand’s dairy industry over night.

*Including one study showing that fractures increase with higher calcium intake.

**China mainly imports milk powder from New Zealand, which it uses in infant formula. This enables new mothers to migrate from rural China to work in urban factories, while their infants are cared for by older family members in their villages.

Film can be viewed free at Water Bear: https://join.waterbear.com/milked

By Philip Lymbery with Isobel Oakeshott

Farmageddon is about the false economy of industrial meat production. While the corporations that promote factory farming applaud themselves for producing “cheap meat” for poor people, when societal costs are counted, industrially produced meat costs society approximately 25 times the sticker price. So as not to infringe on corporate profits, the excess costs (for environmental clean-up and a myriad of health problems) are transferred to the taxpayer.

Lymbery, a long time organic farming proponent, provides an extremely thorough and compelling expose of the numerous drawbacks of raising livestock in concrete warehouses. The side effects of living adjacent to a factory farm include air and water pollution by toxic herbicides and pesticides, nitrates, pathogenic bacteria and arsenic; loss of songbirds, bees and other insect species; reduced life expectancy,* increased exposure to disease carrying mosquitoes, loss of earthworms (due to fertilizer-related soil acidification), increased incidence (by threefold) of childhood asthma; increased antibiotic resistance (due to routine feeding of antibiotics to factory farmed cows, pigs and chickens); reduced sperm counts and increased breast cancer and renal tumors related to Roundup, the herbicide used with GMO crops.

Lymbery also includes a section on industrially farmed fish and they risks they pose to the health of wild fish populations.

His final chapter includes a variety of policy recommendations that could facilitate a move away from industrial farming to safer, less environmentally destructive traditional farming.

*Individuals who live adjacent to intensive dairy farms have a ten year decrease in life expectancy.