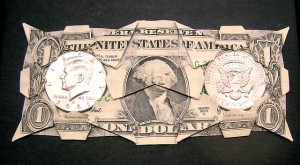 According to Positive Money, the Green Party of England and Wales has joined the US Green Party in proposing to strip private banks of the power to create money. The September 13 motion calls for the power to be placed with a democratically accountable National Monetary Authority at the Bank of England.

The US Green Party has recently adopted a similar plank in their Economic Justice Platform:

15. Nationalize the 12 Federal Reserve Banks, reconstituting them and the Federal Reserve Systems Washington Board of Governors under a new Monetary Authority Board within the U.S. Treasury. The private creation of money or credit which substitutes for money, will cease and with it the reckless and fraudulent practices that have led to the present financial and economic crisis.

16. The Monetary Authority, with assistance from the FDIC, the SEC, the U.S. Treasury, the Congressional Budget Office, and others will redefine bank lending rules and procedures to end the privilege banks now have to create money when they extend their credit, by ending what’s known as the fractional reserve system in an elegant, non disruptive manner. Banks will be encouraged to continue as profit making companies, extending loans of real money at interest; acting as intermediaries between those clients seeking a return on their savings and those clients ready and able to pay for borrowing the money; but banks will no longer be creators of what we are using for money.

The New Zealand Green Party is still debating whether to include a similar provision in their monetary reform policy.

Link to US Green Party: http://www.gp.org/