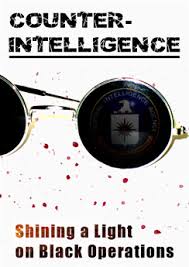 Part 1 The Company (aka the CIA)

Counter-intelligence is a five-part documentary examining the history, structure and function of America’s National Security State. The latter is a secretive, quasi-legal bureaucracy whose primary purpose is to enforce the will of the wealthy elite without interference by elected representatives. Laying out the series like a college course, filmmaker Scott Noble reveals the mechanism by which this invisible shadow government exercises near total control over US foreign and domestic policy. Part 1 discusses the CIA, the Joint Services Operation Command and the NSA

Noble defines “black operations” as illegal clandestine operations that are carried out without Congressional oversight or accountability. The National Security Act President Harry Truman signed in 1947 made covert operations the responsibility of the Central Intelligence Group, which wouldn’t become part of the CIA until the 1950s. .

Truman appointed a number of Wall Street bankers and lawyers to run covert operations. Their foreign trade experience (especially with fascist countries) supposedly made them “experts” in foreign relations. Traditionally top CIA officials have been recruited from the children of Wall Street elites at Harvard, Yale and other Ivy League universities.

Yale’s secretive Skull and Bones society has been a particularly fertile ground for recruiting CIA officers. The requirement for new Skull and Bones members to commit an illegal act (usually grave robbing) prepares them for the illegal covert operations they will carry out for the CIA.

“The Company” emphasizes the role of private foundations and contractors (mercenaries) in concealing  the CIA’s role in assassinations, foreign coups and drug trafficking. The CIA funded the 2002 against Venezuelan president Hugo Chavez by funneling millions of dollars through the National Endowment for Democracy (NED). This made it possible for the Bush administration to deny they played any role whatsoever in the coup.

A major feature of the National Security State is the total absence of oversight or accountability to any elected branch of government. Budgets are virtually unlimited, and there is no requirement for agencies that engage in black operations to report how they spend their funding.

The Joint Services Operation Command (JSOC) is a prime example. The JSOC, which technically falls under Pentagon, receives even less oversight than the CIA. JSOC has a 75 billion dollar budget and employs 200,000 covert operatives, many of them mercenaries. Noble believes the JSOC is a major culprit in trillions that have gone missing from the Pentagon budget.

Owing to its total lack of oversight or accountability, the JSOC is free to contract with a scumbag company like DynCorps, despite their collaboration with the Serbian mafia in sex trafficking – or the sex parties, involving little boys, they throw for Afghan officials.

The National Security Administration (NSA) enjoys even less fiscal accountability. The NSA, which has more operatives than the CIA and FBI combined (40,000), had an $11.6 billion budget in 2012. It also has its own film festival, ski club and yacht club.

Noble concludes by touching on the CIA’s repeated and ongoing violation of the federal law prohibiting them from engaging in domestic covert operations. He briefly discusses Operation Chaos (a 1967-73 covert operation against anti-Vietnam war and civil rights activists), MK-Ultra (a 1957-73 project involving mind control experimentation on unwitting Americans) and Operation Mockingbird (a 1950-ongoing operation in which the CIA “recruits” journalists to present the Company in a favorable light).

(More from my research for A Rebel Comes of Age)

As Ward Churchill (in Pacifism as Pathology) and Peter Gelderloos (in How Nonviolence Protects the State) suggest, white middle class activists have very complex psychological reasons for their dogmatic attitude towards political violence. However it’s also important to look at the role played by the US government and the corporate elite in institutionalizing the nonviolent movement.

In 2007, Australian journalist and research Michael Barker published a fascinating expose in Green Left Weeklys regarding the role played by the International Center for Nonviolent Conflict (ICNC) and similar Left Gatekeeping Foundations* in promoting a de facto taboo against violent protest in North America.

The role the ICNC and sister foundations have played in galvanizing the “color” revolutions in the Eastern Europe, the Philippines, Nicaragua, Chile, Haiti (and more recently the Middle East and North Africa) was first identified in William I. Robinson’s groundbreaking 2006 Promoting Polyarchy. Robinson defines “polyarchy” as “low intensity democracy” – a form of government that replaces violent coercive control with the type of ideological control (i.e. brainwashing) that Noam Chomsky describes in Manufacturing Consent.

In Promoting Polyarchy, Robinson describes how Church Committee reforms of the late seventies forced the CIA to cut back on many of their more repressive covert activities (i.e. domestic spying and clandestine assassination). Their response, in 1984, was to create the National Endowment for Democracy. NED works closely with the CIA, the US Agency for International Development (USAID is another well-documented conduit for CIA funding), and other “democracy manipulating” foundations, such as US Institute for Peace, the Albert Einstein Institute, the Arlington Institute, Freedom House and the International Republican Institute.

Robinson also provides detailed outlines how these US-based “democracy manipulating organizations” orchestrated “non-violent” revolutions in the Philippines and Chile to prevent genuinely democratic governments from coming to power. As well as sabotaging democratically elected governments in Nicaragua and Haiti (where they caused the ouster of the Sandinista government and the populist priest Jean Bastion Aristide).

According to Robinson, the Left Gatekeepers deliberately infiltrate and “channel” (i.e. co-opt) the genuine mass movements that form naturally in countries dominated by repressive dictators. The goal is to make sure they don’t go too far in demanding economic rights (for example, labor rights or restrictions on foreign investment) that might hurt the interests of multinational corporations.

Barker’s work goes even further than Robinson’s in examining the ICNC’s efforts to influence the US progressive movement. Specifically Barker points to the phenomenal influence of the 2000 book and PBS documentary (and now computer game) A Force More Powerful: A Century of Nonviolent Change.

The ICNC is naturally defensive about research by Barker and others linking them to the NED and other “democracy manipulating” foundations. Their website devotes an entire page Setting the Record Straight to refuting these studies. Their argument, that they receive no NED or government funding, is totally factual. The ICNC receives all their funding from co-founder Peter Ackerman, a member of the Council on Foreign Relations, and his wife Joanne Leedom-Ackerman. Ackerman earned his fortune as a specialist in leveraged buyouts, the second highest paid in Wall Street history (Michael Milken made more but went to jail for it.)

Why Did the ICNC Seek to Oust Hugo Chavez?

Barker refers to the argument over the source of their funding as whitewashing, especially given the collaboration between the ICNC and the Albert Einstein Institution in training the conservative Venezuelan opposition who fronted the 2002 coup against democratically elected Hugo Chavez.

As Barker points out, both Ackerman and his wife and ICNC co-founder Jack Duvall have a long history of working for and with the other “democracy promoting” foundations. In addition many of the vice presidents and other officers involved in running the ICNC have links to US or foreign military/intelligence operations or other “democracy promoting” foundations.

This is clear from the following diagrams summarizing the Ackermans’ links to “democracy manipulating” and military intelligence entities:

Groups to which Peter Ackerman is connected (past and present) 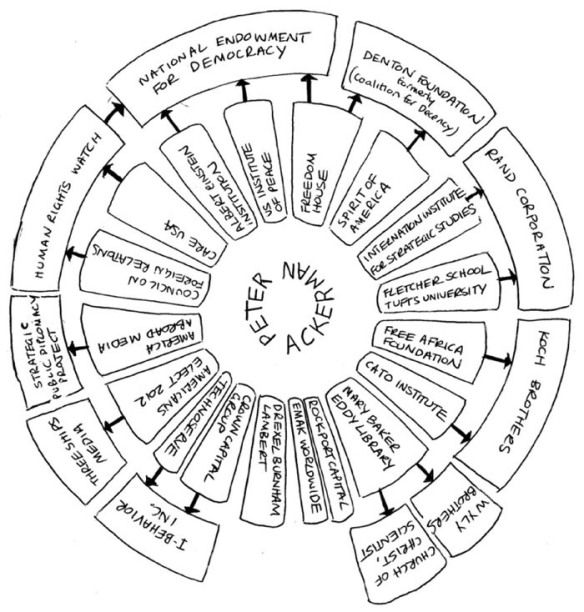 Groups to which Joanne Ackerman is connected (past and present)

Jack Duvall, the other ICNC co-founder, has similar intelligence and “democracy manipulating” links. According to Sourcewatch, he helped former CIA director James Woolsey co-founded the The Arlington Institute. The latter is a non-profit intelligence gathering think tank which boasts:

“We will be able to anticipate the future, thanks to the interconnection of all information to do with you. Tomorrow we shall know everything about you.” [link] 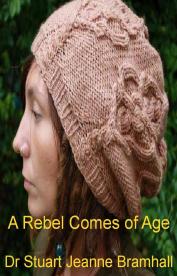 In A Rebel Comes of Age, seventeen-year-old Angela Jones and four other homeless teenagers occupy a vacant commercial building owned by Bank of America. The adventure turns deadly serious when the bank obtains a court order evicting them. Ange faces the most serious crisis of her life when the other residents decide to use firearms against the police SWAT team.

$3.99 ebook available (in all formats) from Smashwords: