Exit Through the Gift Shop

The documentary relates how Los Angeles French-American secondhand clothes merchant Thierry Guetta spent ten years (1999 -2009 making thousands of videos graffiti and street artists he met through his cousin Space Invader and his friend Shepherd Faery.* Thierry would go out with the artists** as they (illegally) painted walls at night.

After learning about the 2003 prank Banksy pulled off when he installed one of his own street paintings at the Tate Museum in London. Determined to meet the elusive artist, he got the opportunity in 2006, when Banksy’s assistant was turned back by immigration during a visit to Los Angeles.

Banksy, who knew all LA’s blank walls from filming local street artists, agreed to serve as his helper. In return, Banksy allowed to Thierry to film him (his hands only from behind).

Thierry also helped Banksy with a prank at Disneyland  in which they handcuffed a blowup doll in an orange Guantanamo jumpsuit to a railing. Banksy includes the hilarious footage (filmed by Thierry) in this documentary. 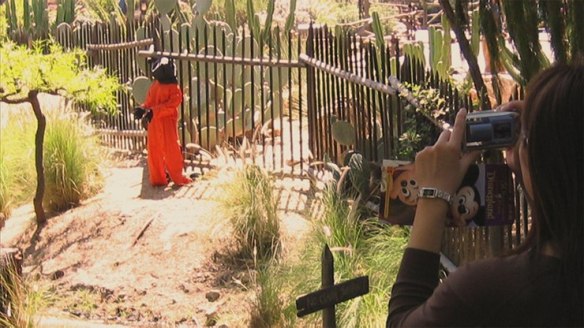 At Banky’s urging, Thierry attempted to edit and pull together his thousands of hours of footage into a film, but the result was underwhelming. Instead Thierry (again at Banksy’s urging) began doing street art himself, while Banksy edited the footage.

Thierry mortgaged his business and his home to set up a studio, where he hired a crew of artists to mass produce satiric images of modern social icons. Calling himself Mister Brainwash (MBW) he hired the vacant CBS studios for his first exhibit in 2008. Endorsed by both Banksy and Fairey, his Life is Beautiful exhibit became front page news, lasted two years, and earned him millions of dollars.

*Fairey, considered the world most prolific street artist (as of 2010), is most famous for designing the iconic image of Obama used in his 2008 campaign. 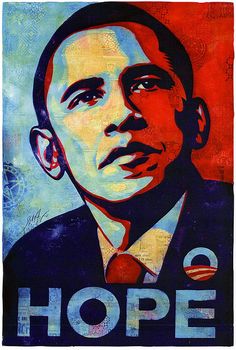