My personal knowledge and understanding of intestinal bacteria stems from being diagnosed with a Clostridium difficile in 2012. C. difficile is an opportunistic intestinal infection that typically develops when excessive antibiotic exposure kills off normal gut bacteria. According to Dr Thomas Borody, the Sydney gastroenterologist I consulted, I most likely became infected with C difficile in 1993 owing to excessive use of broad spectrum antibiotics for a chronic sinus infection. For 19 years other doctors dismissed my extremely debilitating symptoms (constant watery diarrhea, pain and insomnia) as “irritable bowel syndrome” and told me I had to live with them.

Borody, founder and director of Sydney’s Center for Digestive Diseases, is world renowned for pioneering the use of fecal transplantation to treat C. difficile, ulcerative colitis and other bowel disorders triggered by an imbalance of intestinal bacteria. A growing number of doctors and holistic practitioners have come to regard intestinal bacteria, collectively known as the “microbiota” as a vital organ like the brain, liver and kidneys.

Regretfully fecal transplants didn’t work for me. My symptoms persisted until December 2013, when a chance encounter with a local chemist turned me onto the GAPS diet.

Dr Natasha McBride, a British neurologist with a postgraduate degree in nutrition, first developed the Gut and Psychology Syndrome (GAPS) diet for her autistic son. Like most autistic children, her son had major bowel problems in addition to the autism. Researchers have since uncovered links between endotoxin-producing intestinal bacteria, “leaky gut” syndrome and other neuropsychological conditions, such as schizophrenia, depression and ADHD.

The basic premise of the diet, which draws from the Weston A Price diet (see The Taboo Against Animal Fats) and the Specific Carbohydrate Diet (SCD), is to suppress the growth of pathogenic bacteria by eliminating the sugar and starches they feeds on, while simultaneously promoting the growth of healthy bacteria by taking probiotics and eating fermented foods.

McBride recommends that all patients begin with a strict elimination diet aimed at controlling the diarrhea. For the first six weeks, all I was allowed to eat was bone broth made from boiling stewing meat or fish heads, along with probiotics, juice from fermented vegetables, water kefir and kombucha. Once the diarrhea stopped, I was allowed to add new foods at six week intervals, starting with egg yolks (raw), then whole eggs (scrambled), then avocado, then nuts soaked in salt water overnight, cooked apple, and finally lentils, navy and lima beans soaked overnight in lemon juice or vinegar solution. Like most patients with C difficile, I have great difficulty digesting fibrous vegetables and fruits. Thus I have also been very gradually adding small amounts of cooked vegetables.

At the end of 18-20 months, I am allowed to cautiously allow starchy foods, starting with new potatoes and eventually sprouted buckwheat. After 24 months, I can cautiously add very small amounts of other grains, such as rice, oatmeal (soaked) and quinoa.

Even after the C difficile resolves, I can never return to a typical Western diet, with its heavy emphasis on carbohydrates, sugar and processed food, owing to demonstrated links with many chronic illnesses, such as cancer, diabetes, arthritis and heart disease (I discuss this in The Taboo Against Animal Fats).

Given the high stress fast paced lifestyle most of us lead, westerners find it extremely difficult to totally eliminate processed foods, sugar and starch from their diet. For the past six months, I have spent most of my waking hours shopping, cooking and learning to make fermented vegetables, water kefir and almond milk yoghurt (both dairy and soy products are forbidden). The first six weeks were the hardest, due to the copious amounts of fat I had to consume in my bone broth to compensate for the calories I previously derived from sugar, rice and potatoes. McBride is very explicit: patients must eat all the fat off the stewing bones they use to prepare the bone broth.*

After six months on the diet, I feel the sacrifice is definitely worth it. After 20 years of nearly constant diarrhea, pain and insomnia, it’s like a miracle to feel normal again.

Now the only major issue in my life is a social disease called monopoly capitalism.

*I admit to cheating a bit on this requirement by substituting coconut oil (which is allowed on the GAPS diet) for half of the animal fat. I am extremely concerned about the high concentration of industrial toxins found in animal fats and dairy products. Classified as endocrine disruptors, many of these toxins mimic estrogen, which is promotes the development and growth of breast cancer. 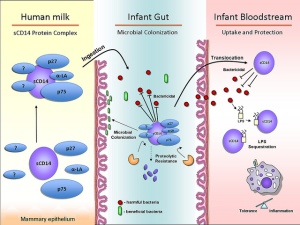 (This is the second of 2 posts about a possible link between intestinal bacteria, obesity, and other chronic illnesses.)

The most enlightening article I’ve seen about micrbiota (gut bacteria) research is an April 2013 article from Mother Jones. It explores the possibility that insulin resistance (see previous post) is actually an “inflammatory” process caused by the production of “endotoxin” by unhealthy gut bacteria.

The Major Health Implications of Dysbiosis

Owing to a doubling of obesity rates since 1980, this strikes me as a reasonable hypothesis. The mass marketing of antibiotics by Big Pharma, Food Inc (in livestock feed), and Monsanto (in genetically modified organisms) has led to epidemic levels of dysbiosis (a derangement in gut bacteria) in the industrialized world. In addition to skyrocketing obesity rates, the developed world has also experienced a significant increase in other dysbiosis-related conditions, including cancer, diabetes, and degenerative and autoimmune disease. It would also explain why children born to obese mothers (we acquire gut bacteria from our mothers) are more likely to suffer from asthma, attention deficit disorder, and autism.

The article cites research from the University of Washington showing that foods high in saturated fats and sugar promote the growth of endotoxin-producing inflammatory bacteria. Endotoxin, in turn, causes inflammatory damage to the the hypothalamus, the brain’s appetite center. When this occurs, people lose the ability to feel full and eat to excess.

The Mother Jones article also references studies in which volunteers improved their insulin sensitivity, as well as losing weight, by reducing their level of “inflammatory” bacteria. They accomplished this by consuming diets rich in fermented foods containing healthy, anti-inflammatory bacteria.

Most interesting of all are studies showing that bariatric (weight loss) surgery helps some patients and not others depending on their ability to grow a healthier microbiota (gut bacteria colony) following their procedure.

The Care and Feeding of Intestinal Bacteria

After suffering a sudden onset of so-called “irritable bowel” syndrome 20 years ago, I have a strong personal interest in dysbiosis. The Sydney GI specialist I consulted says the only effective treatment for most IBS sufferers is to re-establish a healthy microbiota.

The end of the article offers a number of suggestions how to accomplish this. The bottom line is to consume a diet rich in 1) fermented foods with live bacterial cultures and 2) complex carbohydrate and fiber-rich foods these organisms thrive on. Studies show that treatment with whole foods is always preferable to taking probiotics. Fermented foods contain literally thousands of strains of bacteria that work collaboratively with one another. Probiotic capsules, in contrast, contain a dozen strains at most and are likely to be destroyed by stomach acid

Examples of helpful fermented foods include sauerkraut (only if it’s made via fermentation), miso (fermented soybean paste), kefir (a fermented drink), and some yoghurts. To ensure the bacterial cultures are live, it’s best to ferment these foods yourself or get them from a reliable health food store. It’s also essential to check the label to make sure they aren’t pasteurized (pasteurization kills bacteria).

Looking after the new bacteria in my intestine is almost like having a new pet to care for. I can already tell from my symptoms which foods they really like: yam, cooked apples, and avocado. Luckily I’m pretty keen on them myself.