This documentary focuses on the devastating impact of India’s COVID19 lockdown on millions of the country’s migrant workers. India is experiencing a similar pattern to China, with many rural adults migrating to the city for work – and sending money back home to their families.

When Indian prime minister Minister Narendra Modi announced a 21-day lockdown on March 24, he ordered 1.3 billion residents confined to their homes with four hours notice. The immediate effect was to leave millions of casual workers without jobs and with no means to return to their rural villages.

The filmmakers focus on New Delhi, a city of 20 million. When public transport was shut down, thousands of migrant workers tried to walk home along the freeways. Most were stopped and sent back to the slums. There they live, without soap or running water, in makeshift huts, many made from cotton sheets.

At the time of filming, the government was trying to provide two meals a day (consisting of rice and soup) for millions of stranded migrant workers. However it’s estimated several hundreds of thousands missed out.

In New Delhi, United Sikh Volunteers helped fill the gap by cooking and distributing balanced meals to starving migrant workers. People could ring a hotline to let the Sikh volunteers know where food was needed. Their goal was to reach 10 slums a day.

An even bigger problem than food for poor residents was access to medical care. To keep beds open for COVID19 patients, free public hospitals turned away patients with cancer and other life threatening illnesses. 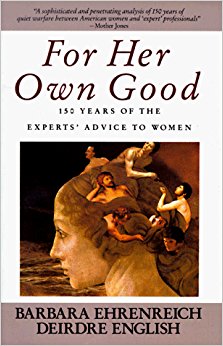 Free PDF:For Her Own Good

For Her Own good is a sociological study of the historical trend of male experts claiming the right to dictate what is best for women. Ehrenreich and English attribute this loss of female autonomy to the sudden and total disruption of centuries-old social roles that accompanied the rise of capitalism.

Under pre-capitalist patriarchy, women were totally subject to their fathers and husbands but still derived considerable prestige from the basic survival functions they performed in the home (ie tending gardens, chickens and dairy cows, as well as making butter, cheese, soap and candles and carding, spinning, weaving, and making clothes). With the rise of capitalism, all these functions were shifted into factories, and the household was limited to performing personal biological functions, such as eating, sleeping, sex, birth, dying and care of children and the elderly.

Even the traditionally female role of healing was transformed into a commodity to be sold in the market place. Prior to the advent of capitalism, except for the very rich (who could afford a doctor), healing was the exclusive domain of women.

Women had great difficulty finding a new role for themselves under capitalism, which led to a virtual epidemic of of depression and “neurasthenia,”* especially among upper middle class women.

The book traces the rise of “heroic” medical interventions that arose when medical care became a commodity (doctors had to engage in active and visible treatment to demand a fee). Most of these interventions (especially blood letting, leech therapy, mercury salts) made patients worse, if not killing them. In the 1830s, the US working class rebelled against doctors as members of a parasitic elitist class. A popular health movement, run mainly by women, stressed the importance of fresh air, bathing, herbs, raw foods and daily exercise as a healthier alternative than the quack treatments employed by doctors.

In the 20th century, the rise of the Rockefeller and Carnegie foundations, which enabled the rise of “science based” medical training in medical schools, gradually forced lay midwives and other non-medical healers out of business.

The Myth of Science-Based Medicine

The authors spend the last third of the book delineating how so-called “science-based” medicine was based as much in myth, misogyny and superstition – at least when it came to women – as so called pre-scientific medicine. This is especially clear from the section on childrearing – where expert opinion seems to have reversed itself every few decades.

In the early 20th century, doctors and child guidance specialists insisted a mother’s role was to regiment a child to insure it behaved like a machine. Mother were strongly cautioned against playing with babies, picking them up except for feeding, hugging, kissing or cuddling them.

Follow the 1929 financial crash, experts reversed themselves and told mothers they had to be permissive and allow children to follow their own impulses in decided when to eat, sleep and play.

Child experts reversed themselves a third time when the US fell behind the Russians in the space race in the 1950s. At this point child experts dumped on mothers for not stimulating children enough or setting firm enough limits.

*Neurasthenia is a condition characterized by physical and mental exhaustion of unknown cause.

Street Medicine is an extremely inspiring documentary about a medical outreach program in Los Angeles Country that sends doctors out to assist uninsured homeless patient whose illnesses prevent them from attended Venice Outpatient Clinic.

The most common medical problems the encounter are TB and other chest infections and severe skin infections and abscesses. Owing to severe mental health cutbacks, many also have mental illnesses.

The clinic receives one-third of its funding from Hollywood celebrities and the rest from federal-state Medicaid funding.