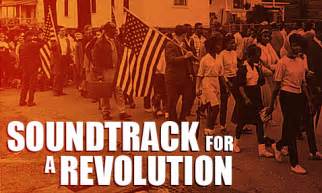 Soundtrack for a Revolution

This week Māori TV showed the extraordinary documentary Soundtrack for a Revolution about the 1960s civil rights movement. The premise of the film is that black protestors who demonstrated nonviolently to end segregation and win voting rights knew they were risking their lives – but the enduring power of their protest songs gave them the courage to do so.

The film retells the story of the southern civil rights struggle, starting with the with Montgomery bus boycott in 1955 and ending with Martin Luther King’s assassination in 1968. It combines great footage of mass meetings and protests, Martin Luther King speeches, commentary by former movement participants and leaders and major protest songs staged in a variety of settings (churches, concerts, mass meetings, etc). It even features a clip from a 1950s propaganda film explaining why Mississippi’s large number (greater than 50%) of Negroes in Mississippi made segregation essential to keep white people safe.

Prior to seeing this documentary, I was unaware of the major economic impact the civil rights movement had on the South. The Montgomery bus boycott, which lasted nearly a year, almost bankrupted the bus company. Likewise Woolworth’s took a major financial hit during the Greensboro lunch counter sit-ins (1960). Because black customers occupied all the seats and Woolworth’s refused to serve them, their lunch counters in no revenue for weeks.

The film finishes with a moving tribute to the dozens of civil rights workers murdered by white vigilante violence in most cases anonymously as southern law enforcement – most were never investigated by law enforcement personnel implicated in the killings) during the 13 year struggle.

The film is available at the Māori TV website for the next two weeks: Soundtrack to a Revolution