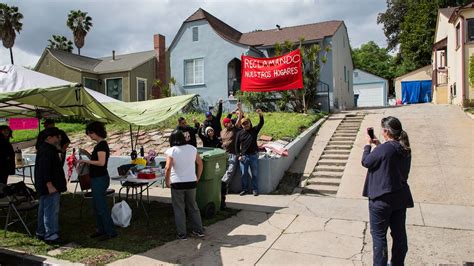 Tiny Home Rebel: One Man’s Battle with the City of Los Angeles

This Australian documentary is about Elvis Sommers’ battle with the city of Los Angeles to build free tiny houses on wheels for the city’s homeless.

Sommers, who volunteers his time, has a crowdfunding site to pay for the materials he needs to build tiny houses. In fact, he has a whole lot full of tiny houses the city forced his homeless clients to remove from Skid Row sidewalks and other homeless encampments. Fortunately he is also quite ingenious in finding public land in low traffic industrial areas, where city authorities are unlikely to notice his homeless friends in their tiny homes. Filmmakers follow him as he moves a pregnant homeless woman (who has just had her tarp and all her belongings confiscated by the city) into her new tiny house.

The Los Angeles city council opposes giving homeless people tiny houses to live in because they consider these dwellings a public threat. According to one city council member, tiny houses are dangerous because they might be used for “sex, drugs, and rock and roll.” According to the city director of sanitation, the real reason is they make it too difficulty to bulldoze homeless tents and belongings to hose down city sidewalks.

At present, the only location LA homeless can legally set up tents to store their belongings is on Skid Row. Elsewhere city regulations require a tent has to be down between 6 pm and 9 am (unless it’s raining), and it has to be at least ten feet from a driveway.

Skid Row currently has 2,000 homeless residents in tents. Every two weeks, they are given 12 hours notice to move their tents and belongings to allow sanitation workers to hose down the sidewalks. If they fail to move them, city bulldozers scoop up everything they own and take it to the landfill.

Sommers finds it ironic that the city spends millions sanitizing sidewalks where homeless live instead of using the funds to provide them with emergency housing.

How Poor People Survive in the USA

This documentary is about homeless members of middle class America whose wages are too low to cover rent. Filmmakers visit San Diego, Los Angeles, Richmond Virginia, Appalachia and Waco Texas.

In San Diego they film a parking lot in which thirty people working as Uber drivers, security guards, secretaries, cleaners, carers and computer technicians sleep in their cars overnight. A charity provides them with portapotties, a water point, and an open air kitchen facility. One of the carers who sleeps there works nine hour days seven days a week.

In Los Angeles, which filmmakers refer to as the homeless capitol of the US (with 59,000 homeless), the documentary profiles a full time volunteer who builds wooden tiny houses (which have been legally banned by the city council) for people currently living tents.

In Richmond, filmmakers follow local sheriffs carrying out an eviction at gunpoint. They also visit one of the budget motels that have sprung up in the Richmond outskirts due to the city’s high number of evictions.*

In Appalachia, they visit one of the poorest counties in the nation, where volunteers run a daily food truck to distribute food to the area’s children. They also profile a military-style field hospital that provides once-a-year medical and dental treatment for the uninsured. The field hospital, held on a local sports field, is funded by a national charity and staffed by volunteer health providers.

In Waco, the filmmakers visit a church program that recruits candidates from all over the US to pay 60 dollars to experience sleeping rough first hand.

*In Virginia, a landlord can legally evict a tenant once their rent is five days past due.

Informants is an Al Jazeera documentary about the FBI use of informants to entrap vulnerable African and immigrant men and convict them on phony terrorism charges.

Their investigation focuses on three specific informants in Miami, Los Angeles and Toledo. In one Miami sting operation, an informant paid poor African American men and Muslim immigrants to take photos of federal buildings and got them to recite a pledge swearing allegiance to Osama bin Laden. This, in turn, would be the principal evidence against them at trial. There was no evidence whatsoever that any of them planned or engaged in acts of violence – nor had contact with any terrorist groups other than the FBI.

One African American convicted in this operation received a seven year sentence and spent two years in solitary confinement.

In Toledo, the FBI paid a mentally unstable victim’s rent as well as funding a trip to Jordan to visit his relatives. The informant also paid him to procure some secondhand laptops to smuggle into Iraq from Jordan. The victim received a 20 year sentence for his role in smuggling laptops to Al Qaeda and making the statement “I wish I could kill some American soldiers” in an on-line chat room.

The creation of the World Trade Organization in 1995 would lead hundreds of US corporations to shut down their American factories and “offshore” them to third world countries with lower wages and fewer environmental regulations. This trend was most pronounced in the textile and clothing industry. Between 1900 and 2011, US employment in apparel manufacturing dropped by over 80% from 900,000 to 150,000 jobs.

Thanks to the largely grassroots relocalization movement, this trend seems to be reversing. According to economist and author Michael Shuman, rebuilding local economies devastated by trade deregulation is one of the most effective tools for dismantling corporate rule. For every dollar spent in a local business, 45 cents remains in the local economy – in contrast to 10 cents for every dollar spent in a corporate retail chain. (See 2010 Harvard Business Review)

While most local economy activism has focused on food production and banking, the last decade has also witnessed numerous attempts across the US to “reshore” sewn goods production. Efforts in New York, Los Angeles, Detroit and Portland have been the most successful. Consumer research suggests the most important driver behind this movement has been growing consumer demand for corporate transparency and accountability. A  2014 Nielson Survey reveals that 42% of consumers are “willing to pay more for products and services provided by companies committed to positive social and environmental impacts.”

Consumers are also increasingly concerned about the environmental profile of the textile and clothing industry, the world’s second most polluting industry (behind oil). Third world dying mills, which use 200 tons of water for one ton of fabric, cause serious contamination when they return the water to local rivers untreated.

They’re also really wary of a particularly environmentally destructive trend known as “fast fashion”. The latter produces cheap, poorly constructed clothing to be worn once or twice and discarded.

Seattle is the latest city to attempt to foster the development of a local sewn goods industry. In 2015, the Seattle Good Business Network (SGBN)* received a Duwamish River Opportunity Grant to investigate opportunities for expansion of sewn goods manufacture in Seattle.

Sewn Goods Case Studies by Rachel Beck and Molly Parkhan, the report of this investigation, is a fascinating read. I was particularly intrigued by their detailed descriptions of the origins thriving sewn goods industries in New York, Los Angeles, Detroit and Portland. The report finishes with some optimistic predictions and solid recommendations for the successful expansion of Seattle’s local sewn goods industry.

*Founded in 2010, SGBN is a “network of residents, local businesses and non profit and municipal organizations dedicated to building a vibrant and sustainable local economy based on shared environmental and community values.”

Waco: The Rules of Engagement

Waco is a long but well-made documentary about what was essentially an FBI coverup of an unlawful military assault on innocent civilians. What immediately struck me about the film are the obvious parallels between the military assault at Waco, the 1975 incident at Pine Ridge in which Leonard Peltier and other AIM activists were arrested for resisting an armed FBI assault and the FBI/Philadelphia police decision to bomb the MOVE compound in 1985 (see The Day Philadelphia Police Dropped a Bomb on 61 Families).

The documentary is anchored around a 1995 Congressional investigation which, unlike the whitewash of the JFK assassination, the Oklahoma City bombing and 9-11, successfully unearthed most of the sordid facts about the government’s illegal (and unconstitutional) military assault in Waco. Predictably the corporate media buried the investigation and its findings. Thus the systematic disinformation the Clinton administration disseminated about David, Koresh and the Branch Davidians is what remains uppermost in the public mind.

What surprised me most about the film was learning that the Branch Davidians weren’t a cult, that the Mount Carmel church where they lived wasn’t a bunker and that David Koresh himself wasn’t a deranged psychopath who buffaloed his followers into a virtual suicide pact.

The Branch Davidians were actually an old offshoot of the Seventh Day Adventist Church which relocated from Los Angeles to the Mount Carmel center at Waco in the 1930s. Koresh (born Vernon Howell) was raised there and eventually selected as the group’s spiritual leader.

Testimony given during the Congressional hearings establishes quite clearly that the initial ATF assault (in which the Branch Davidians defended themselves and killed four ATF agents) was a public relations stunt aimed at influencing upcoming ATF appropriations hearings.

The supposed justification for the assault was the presence of illegal weapons on the premises. As good Texans, the Branch Davidians visited a lot of gun shows and bought and sold weapons as a source of revenue. The search warrant accused them of illegally modifying automatic weapons – which Koresh denied. He invited the ATF to come and inspect their guns in mid-1992. The ATF declined to do so.

Most of the media attention (and the search warrant itself) focused on the fact that Koresh had multiple wives, included several who were underage teenagers. While both polygamy and child rape are illegal under Texas law, they in no way justify a full scale military assault that kills innocent civilians, including the rape victims themselves.

The FBI would follow up the failed ATF operation with a full scale military siege (with tanks) that lasted 51 days.

The evidence presented during the hearings includes intriguing clips from a video camera FBI negotiators gave the Branch Davidians to talk about themselves and their beliefs and infrared footage showing the FBI, Janet Reno and Bill Clinton lied through their teeth about not firing on the Branch Davidians and David Koresh deliberately starting the fire that destroyed the compound.

It also comes out that the FBI deliberately destroyed the crime scene (as Bush would later do at Ground Zero), as well as systematically obstructing efforts by the local medical examiner and the Texas Rangers to conduct independent investigations.