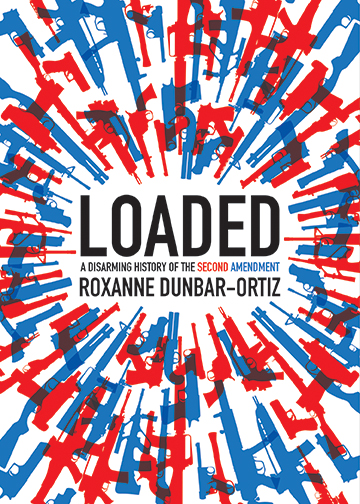 Loaded: A Disarming History of the Second Amendment

According to Dunbar-Ortiz, the main function of the Second Amendment, is to enshrine the voluntary militias used by white settlers to dispossess Native Americans of their land and compulsory slave patrols to hunt down and capture runaway slaves.

She disagrees with gun control advocates on many fronts:

First she disagrees that the Second Amendment right to “keep and bear arms” relates only to their use in a “well-regulated militia.” She maintains that it clearly refers to an individual right, like the other guarantees in the Bill of Rights. The Second Amendment is modeled on various state constitutions (which were already in effect) that guarantee gun possession as an individual right. Moreover the right to form state militias is already covered in Article 1 of the Constitution.

Third she disputes Democratic Party claims that blames opposition to gun control on NRA lobbying. Noting that American gun culture precedes the NRA by more than a century, she argues the organization spends far less on lobbying than Big Oil or Big Pharma.

Dunbar-Ortiz contends that US gun culture is deeply rooted in the racist, white nationalist, God-ordained nature of the virulent capitalism sanctified by the US Constitution. She reminds us of the real issue that triggered the Revolutionary War: namely the British ban on illegal settlement on unceded Indian land west of the Appalachians. George Washington and our other founding fathers derived most of their wealth from illegal surveying and speculation in Native land.

Thus when the US finally won independence in 1791, a massive escalation of “savage war” was unleashed against the indigenous nations that had civilized North America. “Savage war,” aka “irregular warfare,” refers to deliberate violence directed against women, children and the elderly, along with the infrastructure that supports their survival. Although the US government gives lip service to the Geneva Convention, which prohibits acts of war against civilians, their wars have always mercilessly targeted civilians. Prime examples are the 1846 Mexican-American War, the war against Cuba (1898-1900) and the Philippines (1898-1948) and numerous undeclared wars of the 20th century (the Korean War, Vietnam War, Central American War (1981-89), Afghan War, Iraq War, Libya War, Syria War, etc)

The most surprising part of the book is the introduction, in which Dunbar-Ortiz describes becoming a gun owner and joining the NRA when an activist group she belonged to was spied on and stalked by police and intelligence operatives.