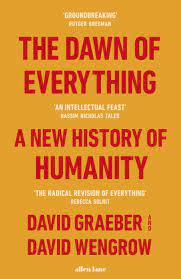 The Dawn of Everything: A New History of Humanity

By David Graeber and David Wengrow

One of the most amazing books I’ve ever read, The Dawn of Everything was completed just three weeks before Graeber’s untimely death in September 2020. According to Wengrow’s introduction, its primary goal is to dispel the prevailing mythology that rigid hierarchical, patriarchal and bureaucratic government is inevitable in a society consisting of large technologically advanced cities.

Presenting massive amounts of archeological and historical evidence, Graeber (an anthropologist) and Wengrow (an archeologist) contend that up to 500 years ago, egalitarian, self-governing societies were the default form of governance for most of the last 40,000 years.

For me the most interesting evidence comes from early accounts of French missionaries interacting with indigenous societies belonging to the Haudenosaunee (Iroquois) confederacy in northeast North America, as well as indigenous commentators themselves.* I am left with absolutely no doubt that these commentaries were the main influence behind the new ideals of “freedom” and “equality” presently attributed to the 17th century (European) Enlightenment.

As Graeber and Wengrow make clear, most pre-Columbian American cultures had a far more developed political self-consciousness than than their European counterparts. This related in large part to their near daily participation in egalitarian governance councils. It also related in part to their direct or or indirect experience with towns or cities governed by tyrannical chiefs or kings. Those with ancestors who had overthrown or walked away from these hierarchical settlements** were exquisitely conscious of the deliberate precautions needed to prevent a recurrence of this of hierarchical form of dominance.

The authors cite numerous other prehistoric cities that were allowed to collapse when their residents rejected dictatorial rule. In fact, they estimate human beings have spent the last 40,000 years building up hierarchical forms of government and subsequently dismantling them. The book includes evidence from Japan, China, pre-Pharaonic Egypt, Sumer, Assyria and medieval Europe (with its incessant peasant revolts),

I was also fascinating by the section on the origin of patriarchy. The Dawn of Everything offers a new interpretation for the naked female figurines (commonly believe to be religious fertility symbols) found across Eurasia from around 7000-3500 BC. 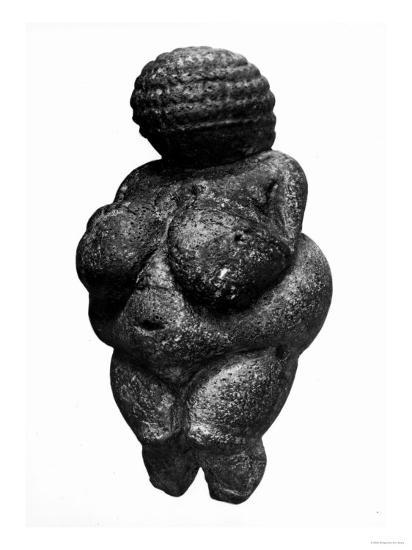 The authors believe the figurines were crafted to honor senior women as co-creators of a distinct form of egalitarian society. Archeological evidence from  Çatalhöyük (in modern day Turkey) indicates that long before grains were used for food, women were harvesting  wild grasses to mix with clay to build homes and ovens, as well as for baskets and clothing.Their intimate knowledge of wild grains would lead women to first cultivate and then domesticate them as wheat and barley, as they went on to develop a range of food technologies, including the use of yeast to produce bread and beer.

Graeber and Wengrow hypothesize the figurines were a self-conscious effort to honor female wisdom, in contrast to the nearby upland society of Göbekli Tepe. The latter was a heroic warrior society, emphasizing male domination and conquest of weaker egalitarian societies for resources and slaves.***

Beginning around 5000 BC, egalitarian communities throughout Eurasia began to be overrun by “heroic” cattle keeping warriors who established themselves as a ruling elite and radically subordinated women.

Matriarchal societies (in which women controlled key stockpiles of food, clothing and tools) persisted in Wendat societies, in the pueblo Hopi and Zuni nations, the Minoan civilization of Crete and the Minangkabau (Muslim people of Sumatra).

*The most famous indigenous commentator was the Wendat (Huron) chief Kandiaronk, who visited Europe and had major influence on the Enlightenment philosophers Rousseau, Voltaire, Montesquieu and Locke, among others. Kandiaronk viewed indigenous societies as far wealthier and more advanced than French society because they were “free of the expectation of constant toil in pursuit of land and wealth.” In his view although the Wendat possessed fewer material goods, they possessed the more valuable assets of “ease, comfort and time (people typically worked 2-4 hours a day in foraging and horticultural societies – even medieval serfs rarely worked more than 6 hours a day).” He viewed French commoners as little more than slaves in constant fear of their superiors. It was also his view that the European-style punitive legal system encouraged selfish and acquisitive behavior. Moreover it was unthinkable to allow any member of Wendat society to starve or become destitute.

**Examples of hierarchical settlements in the New World that were overthrown or allowed to collapse (by residents simply walking away) included Cahokia and other Mississippian kingdoms, Teotihacan, the Great Plains nations (who abandoned farming for hunting after domesticating escaped Spanish horses) and various settlements of the Inuit, the Crow and a number Amazonian tribes.

***Using the slave-owing Nambikwara culture (on northwest coast of North America) as an example, the authors hypothesize that the elites of hierarchical societies sought to capture “foreign” slaves when they couldn’t compel commoners in their own societies to undertake labor intensive work.

Digital Wampum Testimony of the Iroquois

This is a series of eight short vignettes about the Haudenosnunee Confederacy formed in North America some time between the 12th and 16th century. Also known as the Iroquois Confederacy, this governance model inspired the Articles of Confederation adopted by European settlers following the US War of Independence.

Narrated by Chief Oren Lyons, this oral history concerns a legendary Peace Maker who induced 49 leaders from four warring nations to gather at Lake Onondago (in central New York state) to iron out a permanent system of peace, equity and “the power of good minds to make good decisions.”

The six nations who made up the Haudenosunee Confederacy at the time of European settlement: the Mohawk, Oneida, Tuscarora, Seneca and Onondago.

Part 2 of the series concerns lacrosse, now a world sport, a game devised by the Onondago, Parts 3, 5 and 6 concern predictions the Peace Maker made about climate change, Part 4 concerns the tradition of “scalping,” which was devised by Europeans as part of their campaign of extermination against Native Americans, Part 7 concerns the so-called “Doctrine of Discovery” (which denies property rights to all non-Christians in European colonized territories), based on a proclamation issued by Pope Alexander VI in 1493.