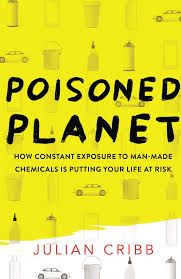 Poisoned Planet: How Constant Exposure to Man-Made Chemicals is Putting Your Life at Risk

Poisoned Planet is an encyclopedia of environmental toxins and their effect on human health. At present, the US Environmental Protection Agency (EPA) has approved 84,000 different manufactured chemicals. This doesn’t include unintentionally released chemicals, which number even higher. In 36 years, the EPA has only banned five chemicals. The US Centers for Disease Control (CDC) monitors 212. All human beings on the planet have a minimum of 150 toxic chemicals in their bloodstream, regardless of where they live.

The World Health Organization (WHO) estimates that man made toxic chemicals cause 4.9 million deaths annually. According to Australian journalist Julian Cribb, the largest source of chemical toxicity is coal burning power plants, giving off mercury, cadmium, sulfur and volatile organic carcinogens. These toxins cause 170,000 deaths annually, mostly from mercury poisoning. Mercury enters the food chain via fish, rice and green vegetables. Public health officials have been warning pregnant women and small children not to eat tuna or shellfish for two decades.

While many toxic exposures are unavoidable, it’s really scary how many people are poisoning themselves and their children through indoor air pollution, food packaging, sunscreens, cosmetics and cleaning products containing toxic chemicals. See Obgyns Speak Out On Toxic Chemicals and Buyer Beware: Americans are Systematically Poisoning Themselves

Cribb is highly critical of doctors for failing to warn their patients about these risks. Sadly current medical training is totally drug-based and medical students receive minimal training in nutrition or toxicology.

The most worrying toxins in food packaging are phthalates and bisphenyl A (BPA). Both are linked to cancer, infertility, asthma, obesity, diabetes and endocrine and neurobehavioral disorders.

Toxins found in sunscreen and cosmetics include phthalates, triclosan and parabins, which have all been linked to cancer, infertility and obesity.

Epidemiologists estimate eighty percent of all cancers are linked to environmental factors, with cancer rates increasing by 1-3% a year. There is also growing evidence implicating environmental toxins to the growing epidemic of infertility and Parkinson’s and Alzheimer’s disease.