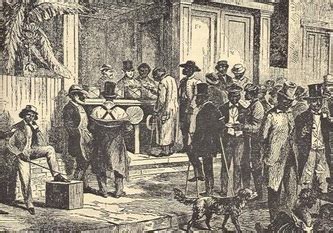 Episode 17: Reconstruction and the Freedmen’s Bureau

As I never studied Reconstruction in school, I found this lecture particularly valuable.

After the 1864 election, Republicans controlled the House and Senate by large majorities. Although most northerners wanted to bring Union troops home, Republicans considered ongoing military occupation essential to protect former slaves and to prevent former secessionists from resuming power.[1] Following the ceasefire that officially ended the Civil War, riots occurred in Memphis, New Orleans and other cities in which police and other whites (in some cases led by the Ku Klux Klan [2]) brutally assaulted and killed former slaves and burned their homes.

Ayers credits the Freedmen’s Bureau (1865-1872) for the most significant benefits of Reconstruction. During its operation it started 3,000 public schools, as well as assisting both landowners and former slaves in negotiating contracts enabling the latter to work for wages as free laborers.

During the 1866 midterm elections, Democratic President Andrew Johnson undertook an extremely controversial campaign tour in which he (as a former slave owner) boasted about his vetoes of civil rights legislation, mass pardons of former Confederate officials and their return to high level offices in state and federal government. This strategy backfired, resulting in a ferocious popular backlash, as well as Republican gains in Congress, as well Republican victories in all governors races and Republican control of all state legislatures.

The 1866 Civil Rights Act was the first law to define US citizenship and to guarantee equal protection under the law for all citizens. Johnson vetoed it, and Congress overturned his veto for the first time in US history. In the same year, both houses of Congress also approved the 14th Amendment (ratified by states in July 1868). In addition to granting automatic citizenship to all US-born persons, it also granted equal protection to all citizens and voting rights to all male[3] citizens. This amendment also provided for states abridging these voting rights to experience a decrease in congressional representation.

In 1867, Congress passed the Military Reconstruction Act, which placed the states of the former Confederacy under military rule (except for Tennessee, the only southern state to ratify the 14th Amendment and be readmitted to the Union). To be reaccepted into the Union, the other former Confederate states had to rewrite their constitutions accepting the 14th Amendment.

Congress also gave itself the power to convene special sessions,[4] as well as passing the Tenure of Office Act. This law made it illegal for the president to fire federal officers confirmed by the Senate. In 1868, after Johnson fired the Secretary of War, he became the first president to be impeached (followed by his acquittal in the Senate).

Despite their new legal rights, the majority of former slaves struggled to make a living in the Reconstruction South. In 1870 the final four states (Virginia, Mississippi, Texas and Georgia) were readmitted to the Union. Troops remained in the South until 1876.

In 1869, Congress approved the 15th Amendment (ratified in 1870) which  prohibits the federal government and each state from denying or abridging a citizen’s right to vote “on account of race color or previous condition of servitude.” According to Ayers, the primary rationale for the amendment was the large number of northern voters who didn’t agree with Black suffrage.

[3] Suffragettes who had campaigned tirelessly for abolition were extremely angry when the 14th Amendment essentially denied them the right to vote.

[4] To avoid a recurrence of the power vacuum occurring after Lincoln’s assassination when they were in recess for seven months.

The Weight of Memory, Episode 10

I found the final episode of the Vietnam War series, shown on Maori TV earlier this week, extremely disappointing. The first half contained some good historical detail and valuable commentary by North Vietnam and Vietcong fighters. The last half was a load of sentimental claptrap about the Vietnam War memorial and other efforts to “heal” the Vietnam experience. It was totally devoid of any political analysis, eg the role of banks, oil companies and defense contractors in strong arming three administrations into pursuing an unwinnable war at great cost to the American people. Even more disgusting was the failure to identify obvious parallels with the illegal US wars in Iraq and Afghanistan, which have lasted even longer than Vietnam.

The filmmakers also totally gloss over the reality that for the Vietnamese, the war was purely a war of independence against foreign invaders.

Episode 10 covers March 29, 1973, when the last US troops left Vietnam, through April 30, 1975 when Saigon collapsed. The US evacuation had scarcely ended in 1973 when the Watergate scandal superseded all other national news. It was all over for Nixon once Congress learned that he had tape recorded all his Oval Office conversations. The tapes would provide undeniable proof of his participation in the Watergate burglary and cover up.

On August 9, after the House Judiciary Committee recommended impeachment, Nixon resigned. On the same day, Congress halved military aid to the (puppet) South Vietnamese government. The result was the virtual economic collapse of South Vietnam. Massive pay cuts would lead South Vietnamese troops to desert at the rate of 20,000 a month.

This episode includes very moving coverage of South Vietnamese who collaborated with the US occupation desperately trying to flee Saigon in front of North Vietnamese troops. Only a few were airlifted via helicopters that evacuated US embassy and security personnel. Many launched themselves into any vessel they could find in the hope of being picked up by US freighters.

Once North Vietnam took control of the south, the blood bath that had been predicted never eventuated. Roughly 1,000 South Vietnamese collaborators were killed in revenge killing and roughly 1.5 million were forced to participate in compulsory re-education.

The Vietnamese economy was a virtual shambles for a good ten years after the war ended. The filmmakers blame this on the privatization of Vietnamese industry and forced collectivization. A better explanation, in my view, is that the US war of aggression totally destroyed the country’s infrastructure and poisoned its farmland with Agent Orange.

Dire economic conditions would lead 1.5 million Vietnamese to flee Vietnam in small and medium-sized boats between 1978 and the early 1990’s. A good number drowned, but most ended up in refugee camps in other Southeast Asian countries. About 400,000 eventually made it to the US.