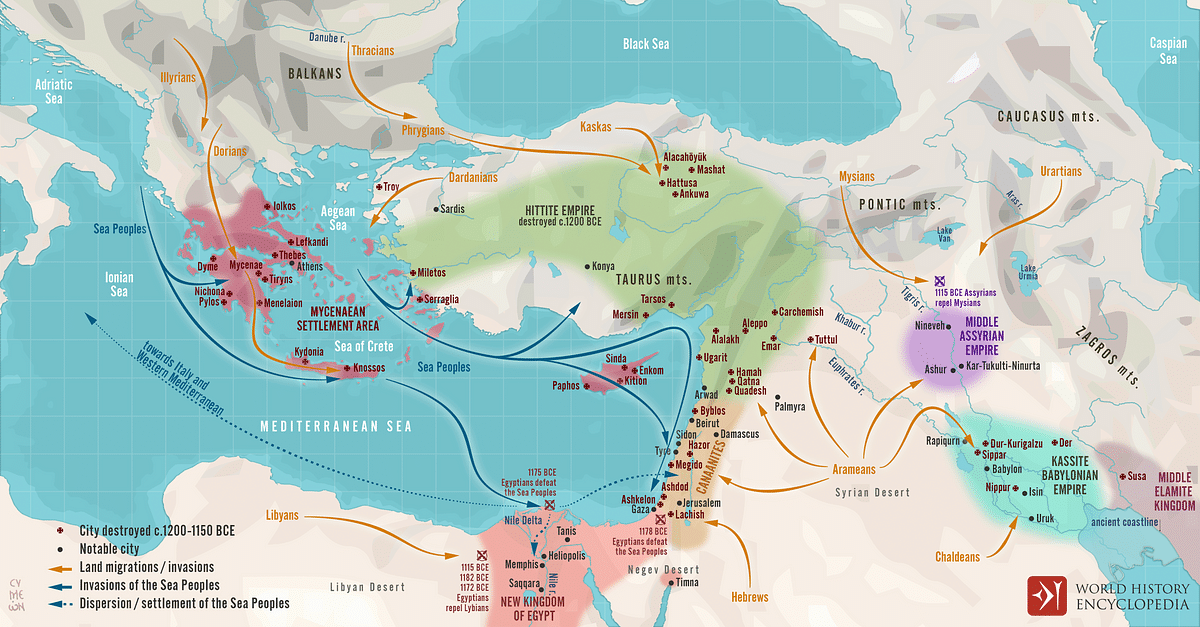 Episode 18: The Late Bronze Age and End of Peace

This lecture concerns the mysterious collapse of all Near East civilizations during the 12th and 11th century BC.

Podany begins by describing the vast Near East trade network established by 1300 BC. The immense wealth of this is clear from the remains of a ship sunk off the coast of Turkey around 1250 BC. Departing from the kingdom of Alashiya (Cyprus), from its cargo it had clearly visited several Mediterranean ports before sinking off the coast of Anatolia.

In its hold were 10 tons of copper ingots from Alashiya, glass ingots and a ton of tin from Canaan, 150 enormous jars of terebinth resin (used as incense and in perfumed oils), ebony, ivory, three ostrich eggs, spices and olives from Africa, Mycenaean* drinking vessels and swords, 800 pounds of Egyptian gold, glass and shell Murax (a vivid purple dye) from Syria.

The Late Bronze Ange diplomatic/trading alliance first started to break down when Hittite invaded Canaan, which was under Egyptian control. The result would be a a direct confrontation between Egyptian and Hittite armies at the Battle of Qadesh in 1274 BC. The outcome was a stalemate, with the Hittites continuing to control the territory they conquered at Qadesh.

A century later the Hatti (Hittite) empire would collapse (1185 BC). Babylonia collapsed in 1155 BC, after being invaded by the Elamites (from Syria). The Alashyian kingdom on Cypress collapsed around the same period, as did the Assyrian empire (formed when eastern Hatti declared independence from Hittite-controlled western Hatti) shrinking back to the single city-state Assur. In 1070 BC, Egypt’s New Kingdom collapsed after 400 years of rule.

The root cause of these simultaneous collapses is obscure. There are  written accounts (the most complete by pharaoh Ramses III) of unidentified Sea Peoples* in kilts attacking major cities and destroying palaces and citadels. Some historians blame grain shortages famines and others a flurry of earthquakes and fires that destroyed several cities.

The explanation Podany (and I myself) seems to prefer relates to popular anger and civil unrest stemming from the heavy oppression and exploitation the opulent elite of these empires imposed on their impoverished populations. This is supported by evidence that 1) only palaces and citadels were destroyed in most cities, with private dwellings left untouched 2) only some cities were attacked while others remained intact and 3) many inland cities beyond the reach of the “Sea Peoples” were destroyed.

This theory is consistent with research David Graeber and David Wengrow present in The Dawn of Everything reveal that (prior to the last 500 years) humankind has had an extremely low tolerance of extreme exploitation. See https://stuartbramhall.wordpress.com/2021/12/14/the-dawn-of-everything-a-new-history-of-so-called-civilization/

*Evidence, along with two Mycenaean ambassadors on board prior to the shipwreck, that the Mycenaean Greek city-states (which preceded the classical Greek city-states by several hundred centuries – see https://stuartbramhall.wordpress.com/2021/11/16/the-prehistoric-phoenician-hebrew-minoan-and-mycenaean-civilizations/) participating in the large Near East trading and diplomatic network established in the Late Bronze Age (1600 – 1200 BC).

**Believed to originate from Mediterranean island near Cyprus, Anatolia and Mycenaea), these Sea Peoples have been identified as originating from Pelest (origin of the name and the ancient Philistine people), Tjeker, Shekelesh, Denyen and Weshesh. Egypt repelled them, though some settled north of Egypt in Caanan. Podany raises the possibility that the Trojan War described by Homer in the Iliad was a Sea Peoples war.

This lecture is devoted to the intricate system of Near East diplomatic relations in the second millenium BC. The major kingdoms Podany discusses includes Mittani kingdom (in Syria), the Hatti Kingdom (home to the Hittites), Babylonia, Assyria and Egypt.

From 1550-1100 BC, Egypt occupied the Levant. When they began a military campaign against Mittani in the 14th century BC, the latter allied with Assyria, Hatti, and and Babylon in trying to draw Egypt into a regional peace treaty by showering the pharaoh with lavish gifts. Although Egypt war more powerful than the other four kingdoms, he eventually agreed to the treaty and the raids into Mittani ceased.

The pharaohs began sending messages written in Akkadian*, exchanging lavish gifts** with the Mesopotamian kingdoms, and even accepting Mesopotamian princesses as wives. Pharaoh Akhenaten (1372-1335 BC) archived numerous Akkadian clay tablets in Armana, much to the surprise of the nineteenth century archeologists who first uncovered them.

Thanks to this elaborate diplomatic system, the period 1500-1300 BC was one of unprecedented peace.

Podany gives special emphasis to the correspondence of king Tushratta of Mittani (died 1340 BC) and pharaoh Amenhautep III. Tushratta’s daughter Tadu-Hepe was engaged to marry the pharaoh (who already had numerous wives, including Tushratta’s sister). One letter Podany reads out chides the pharaoh for embarrassing Tushratta in front of foreign guests for sending an inferior gift consisting of worked gold (gold vessels and jewelry) rather than the gold bars he needed for a building project.

*Akkadian was the official language of all four Mesopotamian kingdoms.

**Egypt’s best gifts were gold, Babylon sent horses and lapus lazuli, Mittani glass and textiles, and the Hatti silver. All of them also sent jewelry, luxury clothing, furniture and tapestries as gifts.

I have always been morbidly fascinated by ancient history, largely because most public schools refuse to teach it. I wanted to major in ancient history at university but was scared off by the surplus of PhD cab drivers in the late sixties.

This intriguing documentary concerns a four-century “dark age” in the late Bronze Age between 1200 and 800 BC. It began when four powerful empires collapsed more or less simultaneously. Because literacy also collapsed, there is no written history describing this period. Thus nearly everything we know about it is based on archeological evidence and oral history Homer captured in the Iliad and the Odyssey.

The four Bronze Age Empires that collapsed are Egypt, the Hittite empire (in Asia Minor), the Mycaenean empire (Greece), and the Assyrian empire (in Mesopotamia).

For several centuries prior to their demise, these prehistoric empires battled each other on their borders and traded territory back and forth.

Since the late 19th century, most historians have blamed their collapse on an invasion by mysterious “Sea Peoples.” However as laid out in this documentary, except at Troy (aka Ilium, aka Wilusa), there is no archeological evidence supporting a major military invasion.**

Based on contemporary archeological evidence, the film argues that a combination of natural disasters (earthquakes, droughts and famines) internal revolts, and a surge in sea piracy*** is a more likely explanation.

By the time written language reappeared in the 8th century BC, a number of new tribes and languages had appeared. Athenian and Dorian tribes had migrated into Greece, Phoenicians and Philistines had migrated into the Levant,**** the new kingdom of Lydia had expanded to cover most of Asia Minor. Assyria would ultimately expand to become the largest empire the world had seen.

*Professor Eric H. Cline’s book 1187 BC: The Year Civilisation Collapsed is credited as a main source for this documentary.

**According to archeological evidence, the Greco-Trojan war most likely occurred between 1300 and 1200 BC.

***All four empires were dependent on Mediterranean trade, especially for copper (from Asia Minor and Cyprus) and tin (from Afghanistan and the Balkans) needed to make bronze.