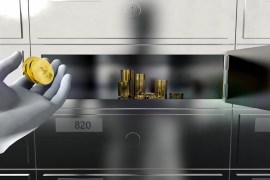 While the rest of us are busting our ass to earn an honest living, Wall Street traders are running around thinking up new ways to rip us off. And laughing all the way to the bank. I love the way they refer to ordinary investors with pension funds or retirement accounts as “dumb money.”

The Wall Street Code is all about whistleblower Haim Bodek and his discovery of a secret algorithm used by high frequency traders to rip off mutual and pension funds (aka “dumb money”).

As of 2013, when this documentary was made, 70% of Wall street trading was automated and 50% occurred within milliseconds. When large volume trades are made, they always drive the share price up. This means there’s a distinct advantage in getting your order in before a large volume trade by a pension or mutual fund.

Badek discovered a secret algorithm that alerted unscrupulous traders to large volume trades before they were made public and help them jump to the front of the queue (and purchase stocks before the share price started to rise).

Bodek believes that Lewis seriously underestimates the serious amount of fraud occurring on Wall Street. Bodek’s persistence has resulted in the prosecution of the New York Stock Exchange by the Security and Exchange Commission – resulting in unprecedented fines being imposed.