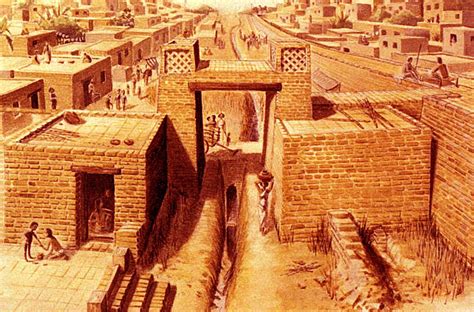 Benjamin attributes the immense success of early Indus Valley civilization (located in modern day Pakistan and northern India) to a uniquely positive environment. The recurrent flooding of the Indus and Ganges rivers by seasonal monsoons created a flood plain with the richest alluvial* deposits in the world. This combined with the natural protection the Himalayas provided against invasion.

According to archeological evidence, grain cultivation began as early as 7000 BC and cotton domestication by 5000 BC. A tripling of the population between 3000 and 2500 BC led to rapid urbanization, gradually progressing from villages to towns to cities. A written language, consisting of roughly 400 symbols, developed. It has never been deciphered.

The two biggest Indus Valley cities were Harappa and Marenjo-Davo. Around 2300 BC, they each had 40,000 inhabitants each. Both produced exceptional pottery, sophisticated street layouts, drainage systems, multistoried buildings, marketplaces, indoor bathing facilities and toilets, and pipes to carry wastes. The cities collected grain (wheat, millet and barley) surpluses as a form of tax, which they stored in granaries.

From early on, Indus Valley cities and towns engaged in a vigorous maritime trade with Persia, Central Asia and Mesopotamia. By 2000 BC, they were also trading with Africa, Persia and the Arabian Peninsula. With Mesopotamia, they traded copper, ivory and pearls for wool, leather and olive oil. With Persia they traded semi-precious stones for gold, silver and copper.

Although the growth of the international trade led to the emergence of social classes, there is no evidence they they formed powerful kingdoms or engaged in military warfare. The richest residents lived in mutistoried homes with large courtyards, while the poor were crowded into one-room tenements. Society was extremely patriarchal. Unlike Sumer, under the code of Hammurabi, and Egypt, women had no legal rights no public life outside the home.

After 1900 BC, Indus Valley civilization began to decline (possibly due to deforestation, climate change, or epidemic malaria or cholera) and the cities were gone by 1500 BC. There is evidence of major migration of Indo-Aryan into the area starting around 1800 BC. It’s unclear where a major invasion took place or if the Indo-Aryans were gradually assimilated into the original Dravidian population.

*Alluvial deposits are nutrient rich sand and soil left behind by rivers and floods.