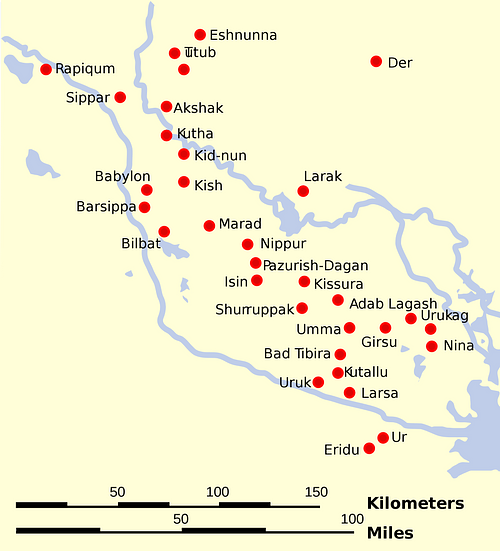 Episode 4: Eridu and Other Towns in the Ubaid Period

The Halaf culture, dating the 6th millenium BC, consisted of small villages supported by simple irrigation agriculture. Eridu, located on the Persian Gulf, consisted of marshy wetlands. The latter dried out as the Persian Gulf retreated (from sea level drop), and Eridu villagers were the first to build irrigation reservoirs, levees and canals to water their fields and pastures.

They have left behind exquisite stone and obsidian tools and highly prized foreign goods (including imported obsidian, copper and shells). In addition to organizing a significant number of workers to build irrigation works, they also collaborated to build a temple Enke, the god of sweet waters. The temple was measured in cubits, which would become a standard measure of measure, even though they had no written language.

The villagers manufactured, clay pots (which they traded for foreign goods), clay sickles and clay balls to use with slingshots.

The northern cultures of Mesopotamia adopted Ubaid pots somewhat later than southern Mesopotamia, although copper smelting originated in the north. As in Eridu, there is clear evidence of an elite class, with larger houses and tombs and more accumulation of foreign luxury goods.

Northerners also smelted gold, silver and the gold-silver alloy electrium for jewelry, as well as “arsenic bronze” (produced by adding arsenic to copper). Eventually northern Mesopotamian towns imported tin from northern Europe and Asia, which allowed them to smelt copper into sturdy bronze tools and weapons.

Some northern Mesopotamian towns from this period had populations over 3,000 and reveal evidence of publicly run kilns to fire pots, as well as the use of pictorial stamp seals to prevent illegal access to the personal goods and rooms.

Chalices of obsidian and marble (some with gold inlays) also date from this period, along with evidence of Syrian domesticated dogs in northern Mesopotamians.

Film can be viewed free with a library card on kanopy.