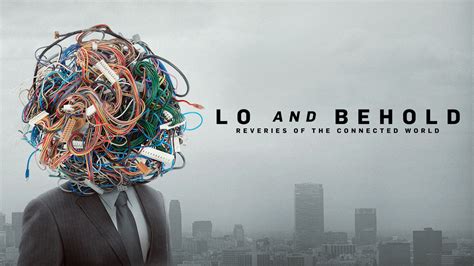 Lo and Behold Reveries of the Connected World

This is a wide ranging review of benefits and drawbacks of the Internet. The documentary begins by examining how the Internet was gradually created nearly a decade before the first personal computers came to market. During the 1960s, dozens of (mainly government) computers were linked up to communicate with one another. Then in 1969, UCLA joined all the networks together to create the Internet.

On the darker side are patients suffering from EMF sensitivity disorder, who are forced to seek out the EMF-free zone in Greenbank, West Virginia.* And people seeking treatment for Internet addiction at a Rehab Center near Seattle. I was surprised to learn of video gamers who wear diapers to facilitate their their 40-60 hour marathons. According to Herzog, gamers in Korea have died at their computer when they became too engrossed to eat or drink.

Herzog also investigates the threat periodic solar flares pose to the Internet – and potentially to civilization itself, given that so much of modern infrastructure relies on the Internet.

For me, the segment on hacking is the most interesting part of the film, featuring an interview with the world’s preeiminent hacker Kevin Mitnick. This section segways into an examination of cyberwarfare. The latter, which tends to level the playing field between large and small nations, is rapidly replacing conventional warfare.

The film can’t be embedded for copyright reasons, but can be viewed at the Maori TV website for the next two weeks: Lo and Behold the Reveries of the Connected World

This documentary provides a general overview of black hat, white hat and gray hat hacking. A black hat hacker hacks into government and/or corporate IT systems for criminal or political gain. At the time of filming, black hats had worked out how to hack into and disrupt high speed trains, blast furnaces, computerized SUVs and baby monitors. A white hacker hacks into corporate IT systems and alerts them to potential security vulnerabilities in return for a “bounty.”*

The private security industry is a billion dollar industry. According to the filmmakers, the US Secret Service has primary responsibility for investigating cyber crimes that threaten the security of US “financial markets.” Meanwhile the US military trains up future soldiers in the art of cyberwarfare.

The last half of the film concerns the current culture of surveillance we presently live in. For the most part, citizens of the industrialized world have traded privacy for security and convenience. In addition to ubiquitous CCTV cameras in most urban centers, Smartphones track people wherever they go. Most users are aware that Google, Facebook and AT&T spy on them and collect (and sell) their personal data but don’t seem to care.

The documentary also raises the alarm regarding the extreme vulnerability of modern computerized infrastructure to both cyber attack and natural events, such as solar storms. Solar flares nearly shut down all computerized infrastructure in 2012, 2013 and 2014. One black hat hacker interviewed by filmmakers claims it would only take him an hour to bring down the whole Internet.

*Sounds to me like a garden variety protection racket. I hate to think what happens to companies who refuse to pay the bounty.

In Code Red, Simon lays out a powerful case that computerized voting machines have opened US elections to large scale fraud and election theft. The book offers an impressive compilation of studies demonstrating exactly how the vote hacking is carried out – both on Direct Recording (DRE) voting machines and optical scanners that count paper ballots. The book also highlights the immense danger of denying access to the public, and more importantly election officials, to voting memory cards, programming code and server logs to verify the validity of American elections. All of this information is declared off-limits by the handful of right-leaning corporations that supply voting equipment to local jurisdictions. On the spurious claim this is proprietary corporate information.

Simon also presents his own extensive research into marked discrepancies between vote counts and voter exit polls over the last 15 years – reminding us that the US State Department uses voter exit polls to verify the legitimacy of overseas elections.

As a Bernie Sanders supporter, I was most interested in the section on the 2016 Democratic primary. Here Simon not only examines discrepancies between the vote count and the original exit polls (before the corporate media massaged the data to bring it in line with the vote count), but serious discrepancies between states that choose candidates via caucus (where ballots must be counted by hand) with demographically similar states that choose candidates via primary elections.

In all but the first two states (Iowa and Nebraska), Sanders didn’t just beat Clinton – he won by a landslide. I confess to my absolute fury on seeing the table below and realizing how thoroughly we were ripped off by the Democratic National Committee and the corporate media.

In The Red Shift, Simon examines every presidential and congressional election since 2002, when computerized voting was first introduced. He finds evidence of a fraudulent “red shift” (ie a hacker-based shift towards the more pro-corporate candidate) in each of them, including the 2006, 2008, 2010 and 2012 elections where there were significant Democratic victories.

He also finds evidence of a “red shift” in most gubernatorial and state house elections from 2002 on, including the 2012 recall election of Wisconsin Republican Governor Scott Walker.