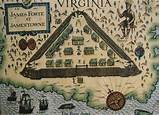 Jamestown was the first North American to participate in the Atlantic slave trade. According to official accounts, a Dutch ship transported 20 African slaves pirated from a Spanish ship to the Jamestown in 1619. They were traded for “victuals (food).” The settlement would turn away a second slave ship (presumably their slaves were also pirated) to avoid “Spanish animosity.”

With plenty of surplus labor to supply their indentured servant scheme (see Hidden History: How Slavery Fueled Capitalism), England was slow to tap into the African slave trade. Initially they only transported slaves to Bermuda and the Bahamas to work sugar plantations. Prior to 1660, the English transported 200,000 African slaves to the New World. Of these, 120,000 went to Bermuda and the Bahamas, 22,000 went to New England and 50,000 to Virginia. The first slaves worked in glass, pitch, sassafras or iron production, but low demand meant poor return for investors.* It was only when Jamestown settlers began growing tobacco (in high demand in Europe due to its addictiveness**) that slavery became profitable in Virginia.

The 1666 Great Fire of London (and subsequent rebuild) also gave the Virginia slave trade a boost by creating local job opportunities for homeless Londoners that might otherwise have emigrated indentured servants.

Virginia adopted slave laws initially codified in Bermuda and the Bahamas. These  differed significantly from those adopted by Portuguese and Spanish in Central and South America. Under English law, Africans and mulattoes were denied the option of buying their freedom (as under Roman slave law adopted by Catholic slave colonies).

Ayers describes the background behind Bacon’s Rebellion in 1675 in some detail. After 1670, white settlers and freed indentured servants*** had little prospect of accessing new undepleted land in the coastal settlements. At the same time, they experienced increasing conflict with Native Americans as they pushed West sinking fertile land. In 1676 after Governor Berkeley banned freed servants from squatting on indigenous land, aristocrat Nathaniel Bacon (who belonged to Berkeley’s governing council) mobilized disenchanted indentured servants, free Africans and slaves to join an armed expedition against the native Americans and eventually Berkeley himself.

The rebellion collapsed when Bacon died of dysentery. Berkeley was recalled to England in disgrace following the rebellion.

*Queen Elizabeth and her successors, who “owned” the land the first Virginia settlers claimed on behalf of England, granted charters signing it over to private investors willing to finance ocean voyages to the New World.

**King James I was the first to campaign to outlaw tobacco use, owing to its detrimental effect on human health.

***The standard contract required  an indentured servant to work for a master 7 years, after which Virginia colony investors would grant them 50 acres of their own land.