The Angry Brigade: The Spectacular Rise and Fall of Britain’s Urban Guerilla Group

The film traces the role played by anarchists exiled from Spain during the Franco dictatorship in inspiring anarchist movements in Germany, France, Switzerland, Italy, Turkey, Netherlands and the UK. It primarily focuses on the Black Cross, an international group providing material and psychological support for anarchist prisoners; the French First of May Group; and Britain’s Angry Brigade.

For me, the most interesting part of the film is the role of the First of May group in instigating the mass insurrection (and near revolution) that occurred in France in 1968.

The only serious inaccuracy in the film relates to the identification of German’s Beider Meinhoff gang as an organic First of May anarchist group. It’s now recognized as a Gladio operation heavily infiltrated (and possibly run) by CIA operatives. See The Secret CIA Program to Control Europe

This 1992 documentary is based on rare archival interviews of former Gladio operatives. Gladio was a secret US/UK intelligence-run program run across Europe between 1945 and its public exposure in 1990. It’s main purpose was to crush strikes and public protests and to prevent groups unfriendly to US/UK interests from coming to power. The main strategies employed were false flag terrorist attacks (mainly bombings and assassinations) that were officially blamed on left wing groups

The Office of Strategic Services or OSS (which became the CIA in 1947) and MI6 (the British secret service) divided up spheres of influence. The Brits ran Gladio in Portugal, Spain, the Netherlands and Belgium and the US France, Germany, Denmark, Norway, Italy, Turkey and Greece. In each of these countries, UK/US intelligence recruited police and secret services, fascist groups and Nazi spies “left behind” when Hitler’s army withdrew from occupied Europe.

Although elected parliaments (and many prime ministers) were never informed of Gladio’s existence, all NATO countries were forced to join as a condition of NATO membership. Moreover the French continued to participate in Gladio after President Charles DeGaulle withdrew France from NATO in 1966.**

In this film, former Gladio operatives from Italy and Belgium discuss their motivation for participating, their role in infiltrating targeted left wing groups,*** the role of local CIA operatives in providing funding, training and other support, and their eventual disillusionment with illegal terrorist actions that deliberately targeted civilians. There are also interviews with CIA officials involved in funding, arming and training Gladio operatives and with Italian Investigating judges, whistleblowers and journalists who helped bring Gladio to public attention.

**DeGaulle made the 1966 decision to withdraw French troops from NATO after learning a secret assassination team operating out of NATO headquarters in Belgium was responsible for four assassination attempts against him. French intelligence would provide details about this group to New Orleans District Attorney James Garrison in his prosecution of Kennedy assassination co-conspirator Clay Shaw (see New Evidence in JFK Assassination). French troops would rejoin NATO under President Nicholas Sarkozy in 2009. 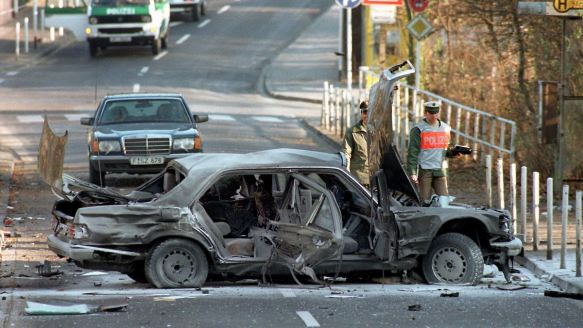 Hidden History: How the Gladio Assassinations of Alfred Herrhausen and Detlev Rohwedder Turned Eastern Europe into a Wall Street Sweatshop

Late Pentagon and intelligence inside Col Fletcher Prouty was the first to raise the alarm that the 1989 assassination of Deutche Bank president Alfred Herrhausen was intelligence-related. This was two decades before the CIA/NATO’s secret Operation Gladio* assassination program became common public knowledge. Although officials on both sides of the Atlantic blamed the so-called Red Army Faction, the extremely sophisticated bomb that killed Herrhausen was well beyond the expertise of amateur extremists.

In a 1992 interview with the Italian Newspaper Unita Prouty states “Some great power center wanted for some reason to get rid of the board spokesman of Deutsche Bank on that day and in that manner, in order to teach others a lesson. So there is a message in the way he was killed.” He adds,“When you consider the great importance of events in the Soviet Union, in Eastern Europe, and especially in Germany . . . then the Herrhausen assassination is tremendously significant. We must not allow it to be swept under the rug.”

In Prouty’s view, the key to the Herrhausen assassination, occurring three months after the fall of the Berlin wall, was his revolutionary proposal to found a Polish development bank, modeled on the German Kreditanstalt fur Wiederaufbau, which played a crucial role in the postwar economic reconstruction of Germany.

What Went Wrong with East Germany?

Economist and historian William Engdahl would explore the Herrhausen assassination in more depth in a 1992 article entitled What Went Wrong with East Germany. The article points out that Herrhausen’s banking views differed significantly from those of the US/British banking establishment.

Herrhausen, recruited by Chancellor Helmut Kohl to assist in planning the economic reunification of Germany, was a champion of third world debt forgiveness. Poland’s debt service burden to help stimulate development in former eastern bloc economies. He also argued strongly for a slow process of German reunification, one that would make full use of East German worker’s superior technological education and skill level. This approach would stimulate East German industrial infrastructure development while simultaneously protecting East Germans against a sudden loss of social supports they enjoyed under the communist regime. Most controversially he proposed to build a high speed rail link connecting Paris, Hanover, Berlin, Warsaw and Moscow.

Instead of taking 10 years, as Herrhausen proposed, following his murder, the process of German monetary and economic union was compressed down to one year. In June 1990, Kohl appointed Detlev Rohwedden to head the government created company Treuhandanstalt to oversee the disposition of the entire East German economy. From the outset, Rehwedder, who shared Herrhausen’s vision of East German infrastructure development, was in constant battle with the western banking establishment and other members of Kohl’s cabinet. He insisted on modernizing East German state industries to make them economically viable, whereas the Anglo/American banking establishment sought to simply dump them onto the open market for private investors to buy up.

In his final interview five days before his death, he announced victory – a vital Treuhand policy change from that of immediate privatization to one emphasizing the rehabilitation of existing industries to make them more competitive.

On April 2 1991, Rohwedder was assassinated by a so-called “RAF third generation” sniper who left no forensic traces to his identity. Within weeks of his death, Rohwedder’s Treuhand policy was quietly reversed under new leadership.

The doors of Treuhand were opened to a host of management consultants to pick over the 81,000 East German companies under Treuhand and prepare them for rapid sell-off. Western firms were offered large incentives to buy former East German state owned firms only to shut them down, fire the work force, or use them in similar jobs at a fraction of what western workers would get.

The social consequences of this new Treuhand policy were staggering. In summer 1992, the real level of unemployment (including half time workers) in former East Germany was 40% of the work force.

*Operation Gladio was part of a post-World War II program set up by the CIA and NATO supposedly to thwart the influence of left-wing groups and politicians in electoral politics in Western Europe. They were notorious for false flag operations in which bombings and assassinations were blamed on fictitious communist groups such as the “Red Brigages” and the “Red Army Faction.” The existence of Gladio was confirmed and admitted by the Italian government in 1990, after a judge, Felice Casson, discovered the network in the course of his investigations into right-wing terrorism.