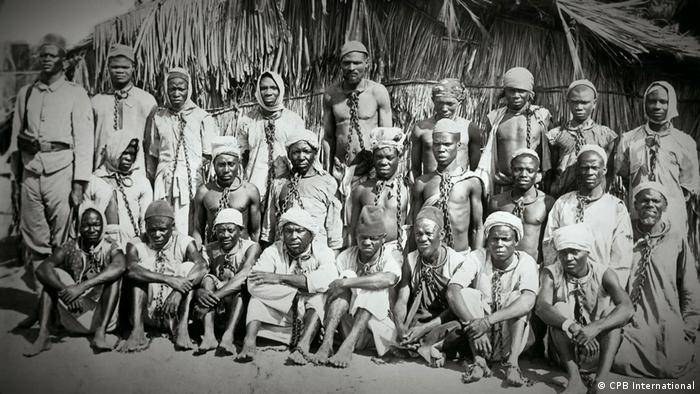 Part 2 For All the Gold in the World

In 1441, the Portuguese were the first Europeans to establish a foothold on the African continent. Portugal was still embroiled in the Crusades and thought an African military presence would confer an advantage in battling Muslim Arabs.*

The Portuguese intended to pay for their African military adventures with gold from Africa’s Gold Coast. In the end, the triangular trade they set up exported slaves they exported to Sao Tome** sugar plantations. The sugar they exported from Sao Tome made Lisbon the richest city in Europe.

Within decades, the Flemish, German, Venetians and Genoese also established slave trading outposts in Africa. As Europeans began to expand south of the Equator, the came in contact with the kingdom of Kongo. As the Islamic Empire had no prior ties with Kongo, the king converted to Christianity and was the first in southern African to establish a major trading relationship with Europeans.

Fond of Portuguese luxuries, the Kongo aristocracy became the kingdom’s first slave traders. They sold slaves to mine gold in Akan (north of Kongo), as well as to Sao Tome to grow sugar. As slaves were notoriously overworked (14+ hour days) and underfed, it was rare for them to survive more than 10-15 years. This meant they had to be continual replaced.

In 1595, after a series of armed slave uprisings in Sao Tome, the Portuguese abandoned the island’s sugar plantations and began transporting African slaves to Brazil and the Caribbean.

*The Crusades didn’t end until 1453, when Constantinople fell to Muslim invaders. In other words, the Europeans lost.

**Sao Tome is an island off the West African Coast

Film can be viewed on Enhance TV at https://www.enhancetv.com.au/video/slavery-routes-for-all-the-gold-in-the-world/52102

In Gaza a consortium of doctors are working with the UN Development Fund to procure solar panels and batteries for the Gaza City Hospital. The Gaza strip has experienced repeated power outages ever since Israel bombed their power plant in 2010. Owing to the blockade on their borders with Israel and Egypt, engineers have been unable to repair the damaged turbines. With only two working turbines, Gaza residents get an average of four hours of electricity for each ten hours of outage.

Because the solar operation is insufficient to supply the entire hospital, the solar feed is used for operating theaters and intensive care, neonatal intensive care and dialysis units. Even brief outages in any of these critical facilities can cost patient lives.

The climate justice movement in Arauca (on the Colombia-Venezuela border) is a compesino movement focused on preventing multinational oil companies from illegally evicting indigenous and Afro-Caribbean farmers from their land. I found it intriguing to learn the true purpose of the US government’s notorious Plan Colombia. Despite the spin fed to the American public (ie about Plan Colombia shutting down Colombian coca production), its true purpose was to assist the Colombian military (and paramilitary forces) in seizing, torturing, and murdering human rights activists. It was actually the campesino movement that shut down coca production in Arauco between 2007-2011.

In addition to organizing protests and direct actions, Colombia’s climate justice movement has organized large local food coops to support their local economy and to resist schemes by multinationals to rip off their cacao crop and sell it back to them as chocolate.

Their movement  has become so large and powerful that the Colombian military has ceased trying to evict them from their lands.

Germany’s climate just movement is focused on shutting down coal mining and coal-fueled power plants. Coal powered plants largely replaced the nuclear industry after activists forced the German government shut it down after the 2011 Fukushima disaster.